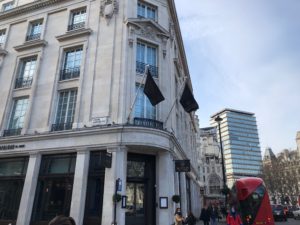 Hotels with history start with a special advantage.  What is now The Trafalgar London St James, part of Curio Collection by Hilton, began life as the headquarters of the Cunard Shipping Line.  How clever of them to have such imposing offices, and right at the south-west corner of Trafalgar Square. There they were, those maritime tycoons offering voyages to the rich and famous, and as they planned itineraries and whether or not they could afford yet another new liner they looked out, from richly panelled offices, at Trafalgar Square – see above. Even the exterior of the six-floor building is suitably impressive. 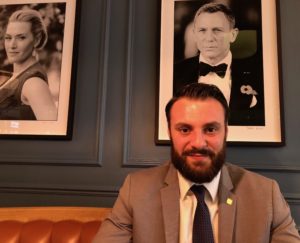 In 2001 the building became a hotel, managed by Hilton as a prototype, under then-GM Andreas Jersabeck, for what could become a lifestyle brand.  But that brand never saw the light of day and now, owned and managed by London&Regional (L&R), it is an independent but part of Hilton’s Curio Collection soft-brand.  Interesting, Federico Ciampi, the very-Italian GM, says he has the best of both worlds.  He is saved masses of brand reporting tiers – Hilton merely does a very thorough two-day mystery shop, once a year – but the hotel benefits substantially from Hilton’s sales, marketing and distribution.  His L&R owners are minutely involved.  This is way he likes it.  Today, the 129-room hotel has 50% of its guests from the USA, with average stay of three nights, above the London norm.  People love the soft-grey bedrooms – see the video – which, in many cases look over Trafalgar Square. 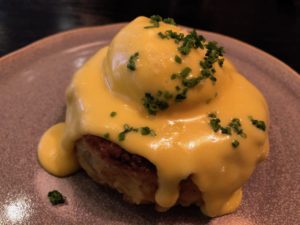 Oh so English, bubble and squeak

And everyone, staying guest or passer-by, adores the spacious rooftop, which now has a canopy that can be pulled over in 15 seconds in case of an English shower.  Downstairs at floor level, The Trafalgar Dining Room is one enormous space that encompasses welcome and reception and conciergerie plus bar and sit-up counter (booked solid every post-working-day from five until 7.30 p.m.) and, all open one to the other, a high-ceilinged, columned eating area.  Sit up, at high tables, or in a really comfortable half-circle leather booth. Enjoy, say, that ultimate English dish, bubble and squeak, traditionally a breakfast dish of fried left-over mashed potatoes and vegetables, sometimes with added meat (the first mention of it appeared in Mrs Rundell’s A New System of Domestic Cookery, published 1806).  Here,  the cooked mash and cabbage fry-up is topped by a Burford Brown poached egg and home-made Hollandaise.  Sitting under a photo of James Bond or another iconic name, how much happier can any global traveller be in a modern-classic luxury hotel? NOW SEE A TYPICAL STARTER ROOM