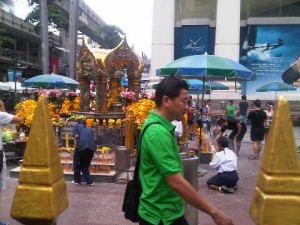 Looking through to the Erawan Shrine, Bangkok

The Erawan shrine stands at the Ratchaprasong intersection of Bangkok’s Phloen Chit Road and Ratchadamri Road.  It was built in 1956 to compensate for the fact that the Erawan Hotel, owned by the government, had its foundations laid on the wrong date and the subsequent construction was fraught with challenges.

An astrologer suggested building the shrine, and thereafter there were no more hiccups.   The hotel, however, was demolished in 1987, and the site used for the Grand Hyatt Erawan, where the gal visited yesterday. 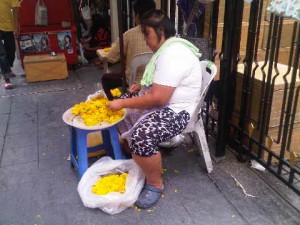 A garland maker near the Erawan Shrine

The shrine holds a statue of Phra Phrom, the Thai version of Hindu god of creation Brahma.  Day in and day out there are lines of people waiting to pay homage here, many bringing him garlands, lengths of marigold flowers strung by ladies working just a few feet away.

This is such a holy place that when a deranged local smashed the statue on March 21st, 2006 he was immediately beaten to death by angry people around – a replacement statue was put in place on May 21st, 2006, at precisely 1139, when the sun was directly overhead.  The new sculpture is plaster mixed with real gold, bronze and bits of the old statue. 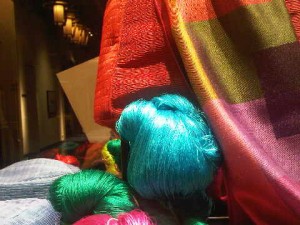 Oh the colour of those flowers! But then colour abounds in Thailand. Everyone who has ever been there has a bit of Jim Thompson silk as a souvenir.

You do not even need to go to Thailand – you can buy his scrumptious fabrics in 40 countries (in England, guess what, the local distributor is Fox Linton, the design firm behind the glorious epitomal country house hotel, Coworth Park).

There is even a Jim Thompson Fabrics blog, telling all about the use of his colourful silks and printed cottons in premium shows and so on – I say ‘his’, because despite the fact not a squeak has been heard of him since he disappeared on Easter Sunday, March 26th, 1967, in the Cameron Highlands of Malaysia, his legacy lives on.  Personally I buy my Jim Thompsons in ‘his’ boutique at Four Seasons Bangkok. 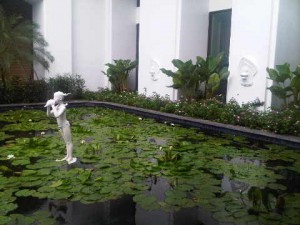 One of the two small figures that greets, at the hotel

What a sense of arrival there is at this luxury hotel, ten minutes’ walk south of the Erawan Shrine. From the main entrance, where cars pull up, it is a 30-foot walk between big decorative pools, both holding a starkly-white Puck figure (yes, the little imp again), rising, as it were, from hundreds of waterlilies.

Inside the main building, the lobby soars through two floors – room for live music in an upper gallery. More colour abounds.  A bar at one end of the lobby turns a vivid gentian blue at night.

Overhead, 24/7, the ceiling is a painting of soft pinks and purples outlined in real gold leaf. The main flower display here is soft colours, to match.  Elsewhere, in corridors and the lounge, there are brighter hues, with lots of orchids. 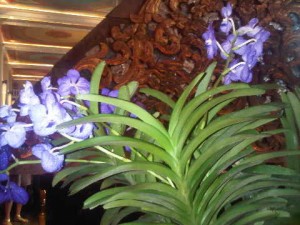 Orchids in front of a carved wood mantel

The hotel is marvellously, 30 years old this very year, and delightfully lives up to its heritage (first Peninsula, then Regent and, for the last nine years, Four Seasons).  Interestingly, one of its restaurants, Spice Market, also celebrates its half-century.

It was designed by a Jim Thompson contemporary, John Rifenberg, another erudite American expat who made Bangkok his home.  I knew Rifenberg, and would revel in every minute of long lunches or cocktails with him, here or at his home nearby.

He was a raconteur and gossip from another, much-missed age.  The hotel started with a strong food culture, and it continues. 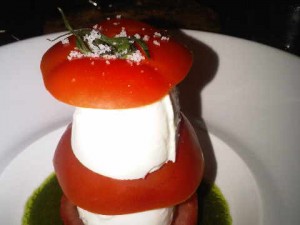 The colour of a caprese tower in Biscotti restaurant…

In a couple of weeks’ time Four Seasons Hotel Bangkok holds its 13th annual World Gourmet Festival. The line-up this year is sensational.

In alphabetical order, there will be Shanghai-born Shiqin Chen, chef of the Michelin-starred La Rei in Il Boscareto; Diego Irrera, from 1884 Restaurante in Mendoza; Galvin Lim from Les Amis, Singapore; Igor Macchia from La Credenza, Piedmont; Michael Mina, the polymath restaurateur who is probably best known for his own-name restaurant in the at 252 California Street, San Francisco; Victor Quintillà Imbernón from lluerna, in Barcelona; Masa Shimakawa of Onyx, Los Angeles, and, finally, Frédéric Vardon of Le 39V in Paris.  There is also tea mixologist Robert Schinkel, ambassador for Dilmah Tea. 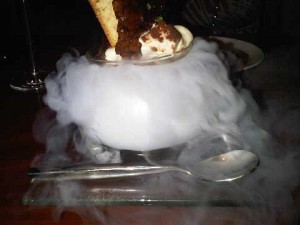 … and a dessert, a-flame as it were, thanks to dry ice.

The whole Festival is sponsored by Citibank, Mercedes-Benz and Thai Airways and it is a massive fundraiser for Save A Child’s Life from AIDS, a local charity whose patron, HRH Princess Soamsawali, is very much involved – yes, once again there is a reminder of how closely Bangkok hotels interlink with Thai royalty. Baht 500, about £10, from every ticket goes to the charity.

And meanwhile, even before the Festival begins, the eating and drinking goes on at this 354-room luxury hotel (my favourite rooms are those looking across Rajadamri Road to the Royal Bangkok Sports Club with its racing track bordering the golf).

When I leave, going out between the Pucks, I notice the new uniforms of the bellboys, with baggy Thai trousers in a soft turquoise that matches the lobby’s ceiling and its flowers.  The gal approves.