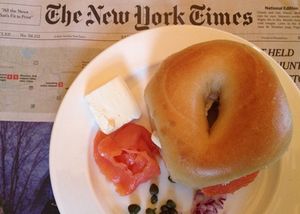 Lox and Bagels, as American as apple pie – and here seen to perfection at an historic luxury hotel, Hyatt at the Bellevue, Philadelphia.  First lox, brined salmon, named for the Yiddish word for salmon, laks.  Next, bagels, invented in Krakow as an alternative to Poland’s Lenten lean wheat-flour bread (in 1610, we know that a bagel was given to women in childbirth).  A bagel is boiled, and then baked, and to serve it right you need not only salmon, but cream cheese, onion, and pickled capers – some add cucumber and tomato.  The gal made a lox and bagel breakfast dish from the scrumptious buffet in the hotel’s XIX restaurant. 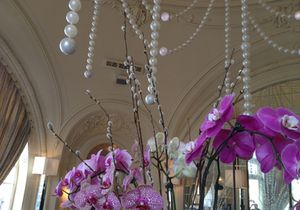 Look across at orchids…

The restaurant and its adjacent café are called XIX because they are on the 19th floor, in the two connecting cupolas atop the Bellevue. At one time the rooftop was open, to be gardens in summer and ice skating rinks in winter.  But then at one time, when the hotel originally opened in 1881, it had, wait for it, 1,090 bedrooms.  It was the creation of George Boldt, born on the island of Rugen, off northern Germany, in 1851. He came to the USA at the age of 13, started as a kitchen worker in New York and when he was 25 he managed the dining room of The Philadelphia Club, here in Philadelphia. 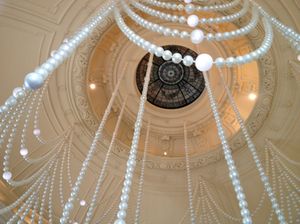 He married the Club’s Chairman’s daughter and, indicating his internationalism, set up the Bellevue Hotel (a ‘beautiful view’ of the nearby statue of William Penn which tops City Hall, perhaps?), and incorporated it with the existing Stratford Hotel. Interestingly, as well as running this, his own mammoth hotel, he was hired by William Waldorf Astor to run the Waldorf Astoria in New York (did he commute, as some do today, by train?). Astor was obviously impressed by the elegance George Boldt had put into his own hotel, an elegance that has continued to this day.  George Boldt also started building a summer home, Boldt Castle on Heart Island, in the Thousand Islands area of the St Lawrence, but stopped work when his wife sadly died. 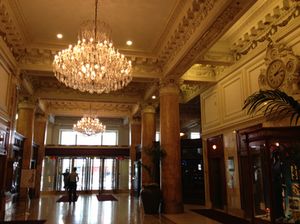 The glorious lobby to the retail area

Today the hotel, run by Hyatt since 1996, is down to only 172 rooms and suites.  It shares the original space with a massive four-floor Sports Club, owned by a local pair of brothers, George and Ron Rubin, and with the Rubins’ equally impressive block of residences, plus a food court and masses of retail.  Come into the retail lobby and you are in an immediate world of turn of the century elitism – turn of the 19th-20th centuries, that is. Think massive marble and fabulous lighting, and shops that include Nicole Miller, Teuscher, Tiffany and Williams-Sonoma. 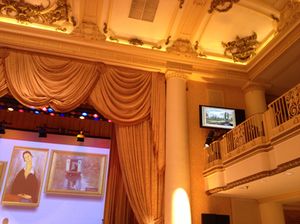 The meeting spaces managed by the hotel are huge, and include a two-floor high ballroom with gallery. There are probably three or four weddings here (or up in the XIX cupolas) every weekend, drawing Philadelphia’s high society.  On Friday April 19th, 2013, the ballroom was being set up for the annual gala of the Greater Philadelphia Chamber of Commerce, to present the William Penn Award to its chosen top citizen, J. William Mills III, regional President of PNC Bank.  At the back of the stage are copies of some of the glorious paintings in the nearby Barnes Foundation. 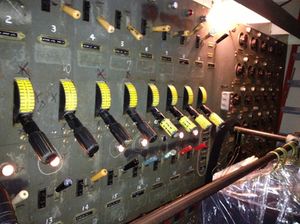 Behind the ballroom scene is just as fascinating as the front.  This luxury hotel must be the only property anywhere to have lighting controls set up by Thomas Alvar Edison 1847-1931 – and still in working order. But this hotel has so many unique points.  It was listed in the US National Register of Historic Places in 1977. Past guests include every US President you can think of, Sigourney Weaver’s short-lived Political Animals television show was partly shot here, as was Paranoia, to be released August 16th, 2013 (it stars Harrison Ford, plus Liam Hemsworth, Josh Holloway and Gary Oldman).