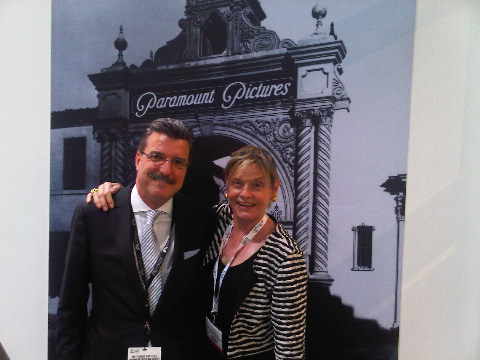 Something happens to the gal every day (is it because one keeps one’s eyes open or what?).  At the massive Arabian Travel Market, a Reed event held annually in Dubai, I ran into a long-time friend, Thomas van Vliet.  Wow, now he is heading a brand-new hotel company, Paramount.  Think what that could lead to.

Arabian Travel Market, ATM, was opened by the ruler of Dubai and VP of the UAE, HRH Sheikh Mohammed Bin Rashid Al Maktoum.  This shows the importance that Dubai gives to tourism.  Can you imagine Barack Obama opening the Marine Hotel Association meeting, or David Cameron opening World Travel Market?

I can just imagine, actually, Nicolas Sarkozy opening the biennial Vinexpo in Bordeaux, especially when an election is coming up…. anyway, for the next few days anyone who is anyone in the travel world is here in Dubai.  Reed cleverly inserts a professional forum, working in conjunction with the World Tourism Organization, a Specialized Agency of the United Nations. 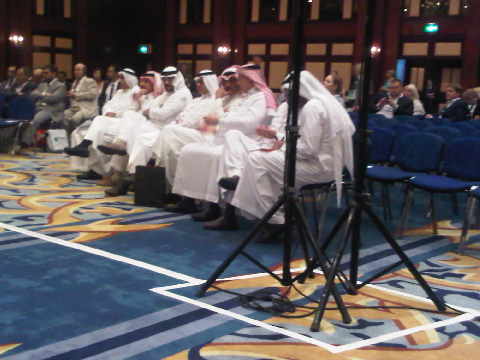 UNWTO is headed by a charming and erudite Jordanian, Taleb Rifai. He and Jumeirah’s Executive Chairman Gerald Lawless (whose fief includes ‘the world’s most luxurious hotel’) and other important luminaries – including HRH Prince Sultan bin Salman bin Abdulaziz Al-Saud President and Chairman of the Saudi Commission for Tourism and Antiquties; Mounir Fakhry Abdel Nour, Eqypt’s Minister of Tourism; Ahmed Abdulla Al Nuaimi, Chairman Qatar Tourism Authority and so on, with suitable retinues in immaculately-ironed full-length white thawb robes – discussed what is going on, their projections and how to get the message out.

The two-hour session was moderated by John Andrews of The Economist (top journalists make good panel supervisors as they know what questions to ask). Taleb Rifai reckons that the Arab Spring has resulted in the ‘loss’, through non-appearance, of some seven million tourists in the region, although Kuwait, Oman, Qatar, Saudi Arabia and UAE all registered growth.

No matter what happens in some areas, specifically Egypt and Lebanon, they always bounce back – one challenge is that Europe still remains the backbone of world outbound tourism.   In all the region expects to have 195 million a year by 2030 (Abu Dhabi and Dubai together had 11.2 million in 2011). 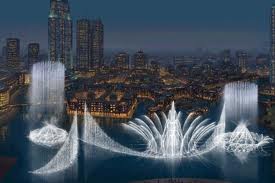 Regional issues also include visas, and the appalling UK outbound taxes that penalise longer flights – the UK government is depriving the rest of the world as its citizens are encouraged to stay home, or in the EU. The UK government treats travel and tourism on a par with alcohol and cigarettes, as a vice.

It was generally felt the industry needs to raise its voice on the export contribution it makes. The biggest issue is training. Tourism education should be introduced even at high school level.  Youngsters need to be encouraged into the industry, with vocational apprenticeships as well as academic tertiary facilities available.  This, said the Ministers of Tourism, is the best way of combating threats of terrorism growth.  The industry needs to project this message to the world at large.

Meanwhile, the tens of thousands of tourists that are in Dubai any and every day of the year were doing what they always do.  Many head straight for the beaches, others for the shops. There are malls with indoor ski slopes and malls with giant fish tanks. 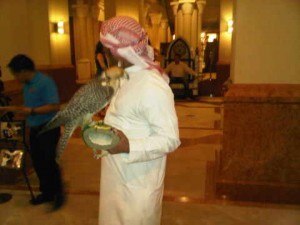 The Downtown area hosts the Dubai Mall, attached to Souk Al Bahar.  This whole complex is built around the 30-acre Burj Khalifa Lake.  On a bus once I sat next to the boss of WET Design, who had done the musical fountains at Bellagio in Las Vegas.  WET has also ‘done’ Burj Khalifa Lake.  At a cost of $218 million the lake’s dance works from 1800 every evening.

Curving lines of water 902 feet long shoot water 240 feet high, illuminated by 25 coloured projectors working in sync with 6,600 lights.  One of the accompanying music tracks is a special reworking of the Motown classic ‘Ain’t No Mountain High Enough’, which is also the anthemic soundtrack to DHL’s campaign featuring across the Middle East right now.

Having got to The Palace Old Town, the rustic mediaeval-look luxury hotel that leads straight into the souk, I headed to room 576 (looking right out over the lake, like all 242 rooms).  I ordered a quick snack, a mozzarella and beetroot salad followed by vegetable risotto, and then headed out to the Armani hotel, in the iconic Burj Khalifa tower. 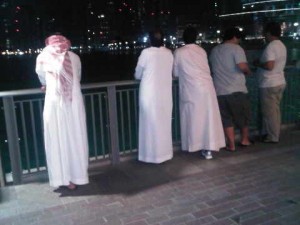 I could see it, but to reach it required heading into the Souk Al Bahar, past Starbucks, down stairs, walk forward, by the falcon turn right, over an outdoor, Ponte Vecchio-style bridge and on reaching the entrance of Dubai Mall, turn left to push through the heaving mass of people.

Locals and visitors flood out on to the Dubai Mall pedestrian-only corniche, to watch the Lake’s show, to see and be seen.  Apparently on Friday and Saturday evenings you can barely move. 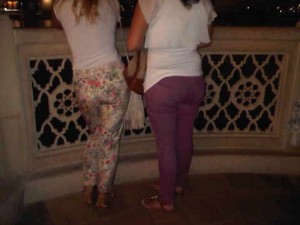 Back home at The Palace Old Town, it was calm.  Around the pool, itself flanked by palm trees illuminated by trunk-enrobing fairy lights, small groups lazed on loungers, smoking shisha pipes.

As I did my laps, I thought how a guy in the spa, on a runner next to me, had – just like the palm tree trunks – been enrobed in a heavy belt to help him lose weight.  Funny the things that come into a traveller’s head these days….