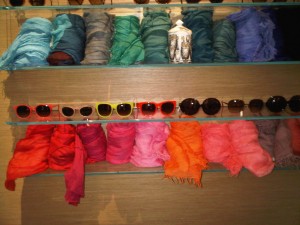 Is too much ever too much, the gal wonders?  She is in Paris, back at Le Royal Monceau Raffles, in one of five recently-opened ‘little suites’ in a historic block adjacent to the main hotel.

Each one, a presidential suite if it were only half the size, occupies an entire floor. Each one is an amazing realisation that designer Philippe Starck can be sort-of normal, and thanks to finishing touches the end result is sheer beauty.

Go into the hotel, right on avenue Hoche, a hundred yards from the Arc de Triomphe. Instead of then turning right to the hotel’s front desk and main elevators, you go straight ahead, into the oh-what-a-buzz lounge and take next right, walking along the perimeter of said buzz and up three and then five steps to a corridor.

You pass a glass-walled scarlet smoking room on the right, the entrance to the Italian restaurant, Carpaccio, on your left.  Carry on to a private corridor, a private elevator, exclusive to these five apartments, and the basement spa. Elevator, like your suite, is accessed with a pressure pad in a tiny pink tissue-lined paper envelope.

Stainless Z-chair by Zaha Hadid, in the hotel's stunning boutique

Suite 341 is totally exquisite. It leads directly off the tiny third floor elevator lobby. From small to what seems like eternity.  Like its siblings, below and above, this is a staggering 3,600 sq feet in all, a palette of stone-coloured moulded walls and ceilings with colour from highly-elaborate flower displays, say on the eight-seat all-mirrored over dining table.

Five foot-tall mirrors propped somewhat casually against walls in the three bedrooms are in fact televisions – the Panasonic set in the main sitting room, by contrast, does not pretend to be anything but a television.  There are lots of books, some standing up in illuminated shelves but others, vying to be bigger and heavier than their neighbours, take up some of the space on a six by five foot marble coffee table.

Each bedroom has a satin-headboard bed with hand-embroidered linens, a walk-in closet and an enormous, well-lit bathroom with an eight-light Murano chandelier, two heated towel rails and Italian no-name toiletries specially made for the hotel. There are what seem like acres of mirrors, completely covering corridors and walls (take care, when rushing from one telephone to another as some edges are sharp). 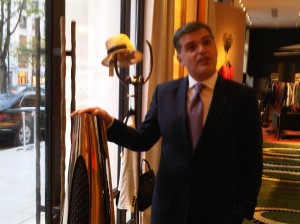 We head down to Le Royal Eclaireur, more than a boutique but a lifestyle centre run by Armand and Martine Hadida, who started the first L’Eclaireur back in 1990 (Armand is the man you need to know if you want runway space at the Paris fashion shows – style runs in the Hadida blood, as their son Michaël Hadida created and runs Tranoï, which four times a year introduces Business to Fashion).

This beautiful space, designed by Starck, has such a long frontage on avenue Hoche that most passers-by, and those who enter, have no idea it is a ‘hotel shop’. Here there are racks of fabulous frocks, from little Versace beaded numbers to full-length red carpet beauties (the kind of thing one might, in the USA, hire from Rent a Runway).

Here you want to buy, everything, from bright-coloured framed sunglasses to matching lightweight scarves.  Here is the Ciclotte, one wheel bicycle that was first seen at Costa Smeralda (I had actually tried it when I called in, briefly, to Le Royal Monceau Raffles Paris last November). There is a shiny steel Z-chair by Iraq-born architect Zaha Hadid.

Here too is a bronze Shape Audio sound system.  This gorgeous thing, called Organic Harmony, is a bit of Swedish genius.  It stands about 53 inches high, and is 10.6 inches wide, and is an omni-directional stereo loudspeaker that can be controlled via your iPad or phone.

Two hundred lucky invitees will hear an exclusive, live, Lenny Kravitz, a friend of Armand Hadida, playing, just for them – though it will also be beamed live via twitter, and a feed to Raffles Dubai. We have not finished our pre-dinner ramble yet.

We head for the Starck Club, a private members-only hideaway.  Each lucky invitee is given his, or her, own cigar locker.  Sit here, with other ambassadorial types, in plush tomato-leather 19th century armchairs with little built-in trays on one arm, smoke your Monte Cristo No 1, read the art magazines around, enjoy your personal cognac. 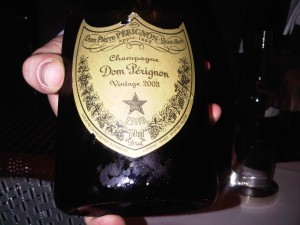 A bottle of Dom Pérignon 2003 was tasted, pre-general release

Finally it is dinner, for which the gal now has a serious appetite.  We enter Carpaccio, via its main kitchen on the left.  The room is a  canvas tent supported in a glass conservatory, with a giant shell chandelier surrounded by 16 matching hanging lamps, their bases showing black and white photos of historic buildings. White linen tables are set with gold show plates, silver side plates.

We have tastings. The sommelier, who has 1,200 labels at hand, presents a champagne ‘find’, a JL Vergnon Le Mesnil sur Oger.  He then somehow finds a bottle of the yet-unreleased 2003 Dom Pérignon, which has more Pinot Noir than its older brothers.  The bread basket arrives, and there is a tasting of olive oils, an Umbrian Viola, a Sicilian Cedric Casanova (with a name like that, he had to win).

Simplicity: selection of home-made breads ready for a tasting of olive oils

Carpaccio’s menu is, like the (tiled and carpeted) floor, Escher-like in its eye-challenging non-stop pattern of blocks.  Superimposed on the menu – fortunately not on the floor – are Dali-like engravings of pigs and mushrooms and silver-service cloches.  Despite this complexity you can eat simply.

The sommelier suggests, to go with the Dom Pérignon, Veal tartare with morels, confit onions, herbs pesto, and a side dish of olive oil ice cream and a thyme babba bruschetta-style.

This is exactly what it says, the main dish a tower of blue flower-covered tartare with delicious blobs around, the side bowl with a small scoop of ice cream and a half-roll that is obviously the thyme babba, though what with home made focaccia, highly recommended from that bread basket, and skinny grissini, necessary for the earlier olive oil tasting, it is impossible even to try the babba. 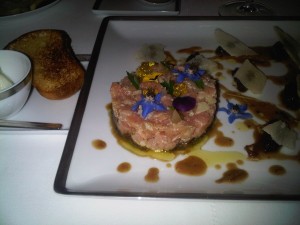 Flower-topped veal tartare, with a side of olive-oil icecream

Knowing that all the ordinary, sorry EXTRAordinary rooms in this 149-room luxury hotel have acoustic Fender guitars, it is tempting to follow with the listed ‘Guitar’ spaghetti with lobster and fennel seeds bolognaise sauce, but I choose Black farfalle pasta with roasted scampi.

I expect a dish of pasta with a few bits of scampi.  I get enormous, big-enough-for-the-Guinness-Book-of-World-Records scampi, tails still on, and just discernible underneath is a black bed, the pasta.  This is a hotel full of surprises, from beginning to end of an overnight stay…..