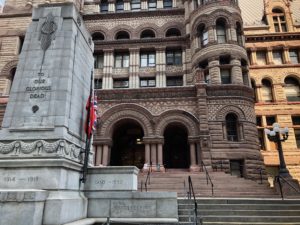 The gal took a walk through some of Toronto’s historic areas, past the Romanesque-style Old City Hall on Queen Street. Finished in 1899, it is built of sandstone from the Credit River valley, grey stone from Orangeville and brown stone from New Brunswick.  Apparently local councillors were so angry at the cost, over C$2.5 million, that they refused to allow a plaque to the architect, Edward James Lennox, but he got his own back by asking his stonemasons to write his name in corbels running around the upper floor eaves, namely ‘EJ LENNOX ARCHITECT AD 1898’. Sadly, a fashionable hotel was demolished to make way for this building. And so I reached the Shangri-La Hotel Toronto, by architect James Cheng, finished 2012 under the meticulous guidance of co-owner Ian Gillespie, a man of great taste. 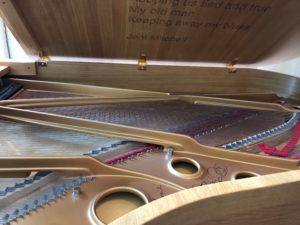 Go through glass doors into the double-height lobby and I feel instantly at home, thanks to Shangri-La’s company-wide fragrance (introduced in 2006, Essence of Shangri-La is correctly described, as if in oenological terms, as ‘fresh and clean, subtly Asian, serenity and calm (bottom notes vanilla, sandal and musk, with top notes of light bergamot and tea spiced with ginger’). In the lobby, I see a gas-fuelled, two-way fire.  Nearby is the Fazioli grand, played every day from tea time through to the early hours – Fazioli, the eponymous Venice-area factory started by mechanical engineer Paolo Fazioli, only makes an average of 125 grand pianos a year: they are used in such global competitions as the Chopin event in Warsaw. It was of course Ian Gillespie who chose the piano, and it is he who fills the six glass vitrines in the lobby with priceless couture gowns from his own historic collection. 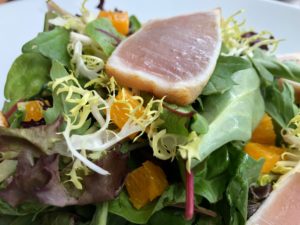 This is an owner who believes in partnering.  Momofuku leases two restaurants here, and, fortunately guests can sign. Behind the hotel, in a separate building, is Soho House Toronto, and recently arrived hotel GM Ron Pellerine is working on a package to allow guests of the 200-room to have temporary membership of Soho House Toronto, with signing privileges. Ron Pellerine, by the way, is delighted to be back home once again: he is an Ontario boy, who after years working outside North America came here after a contract in Boston.  We had a Canadian lunch, kicking off with sweet New Brunswick Caraquet Bay oysters – see the photo above.   They are delicate and dainty, I was correctly told, and an ideal way to eat them is actually to add a shucked plateful into a pint of beer. 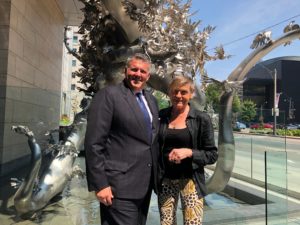 After a healthy green salad topped with tuna, I had to leave, but there was one last USP to this unforgettable hotel. Outside its main entrance, on University, is a gigantic stainless steel sculpture, Rising, designed by Zhang Huan, then 45, in 2010.  It wraps up and into the building – outside alone, it measures 21.98 by 19.8 metres, and a further 16.85 by 14.88 metres extends inside.  Ian Gillespie, the visionary owner of The Shangri-La Hotel Toronto, does not do anything by halves!