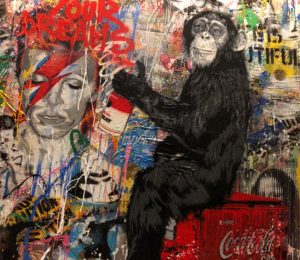 Pride of place by the elevators

The Hazelton, in Toronto’s Yorkville, features several industry firsts. Where else are you confronted, on arrival, by lots of steel suitcases (sculptures) and by a lifesize monkey (painting). Now, for nearly four months, The Hazelton has temporarily become a pop-up shop – GOOP – that happens to have a 77-room luxury hotel and a highly successful free-standing restaurant and bar complex wrapped around it.  All this has happened, says GM Hani Roustom (see him, above) because his ground-floor boutique, leading directly off Yorkville Avenue, was empty.  No problem, he was approached by Gwyneth Paltrow’s retail people.  Could they rent the space?  Negotiations took place, local designers Yabu Pushelberg, who had done the hotel when it opened in 2009, turned the empty space into GOOP. 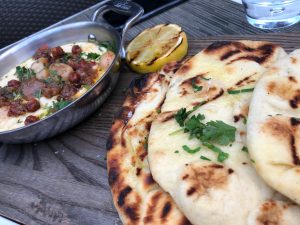 From the very start The Hazelton, a Leading property, has been a disruptor.  Instead of running its own restaurants and bars it has partnered with Mark McEwan, a local restaurateur known for Bymark and North 44 and other outlets.  McEwan, whose face and name are prominently visible, runs room service and all private dining, plus the bars, and the main restaurant, ONE. Its indoor space can cope during Toronto’s long winters but in summer ONE stretches out to an L-shaped patio that takes up half the sidewalk of Yorkville Avenue and Hazelton.  This is definitely the place to be: this is the meeting place for the who’s who of Yorkville. 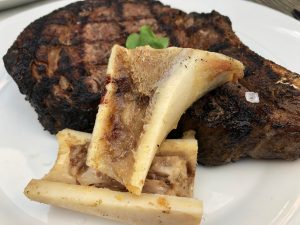 And yet the food is not fancy – it follows Hani Roustom’s belief that today’s travellers want local, and authentic. Roustom is originally from Sidon so we started Lebanese, with hommus, and then I went Canadian. My bone-in ribeye came from Prince Edward Island, the wine was ONE Red Cabernet 2015, from Vineland Estates in Ontario (a very go-ahead winery that has regular programmes of jazz in its own restaurant).  I heard about the marvellous initiative that Hani Roustom is leading, Be My Guest, to introduce hospitality to 11th and 12th grade high school students. Working with Toronto’s George Brown College, and other hotels, notably Four Seasons, Fairmont Royal York, and InterContinental on Bloor, teenagers have become interns and gained positive aspirations for their future. 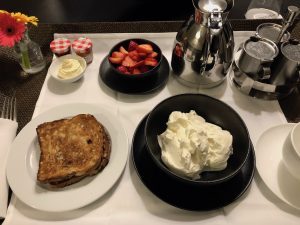 Once again I had a horribly early departure, but a 24/7 fitness facility always helps.  My room service pre-breakfast arrived exactly at five, and my car was there at 5.45 a.m. What made my departure all the more pleasant was that the few people around at that hour were all smiling and one thoughtfully gave me a brown paper bag of healthy snacks. But then this is a thoughtful hotel, which today’s luxury travellers appreciate. Sadly GOOP was closed at that hour but, had it been geographically possible, the pop-up looked so enticing I would have come back later, at least before it pops-down (or out?) come 30th September 2019. HAVE A LOOK AT GOOP, AND WALK AROUND PART OF THE HOTEL’S GROUND FLOOR