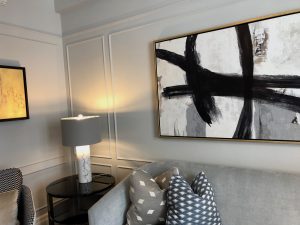 Well well well. The old nursery rhyme describes how the grand old Duke of York marched his men up and marched them down, and the 90 year old dowager that is Fairmont Royal York has had a past of up times and not so up times but honestly, says the gal, since this June, after a renovation that cost hundreds of millions of dollars, she has been as high as Everest.  So many remember the mausoleum of the lobby, dominated by a floor-standing clock. Now, re-designed by Rockwell, a giant clock looks down on what is a brilliant and so-popular lobby bar, CLOCKWORK Champagne & Cocktails. Alexandra Champalimaud, whose Raffles Singapore renovation has also just opened, has done the hotel’s completely-new Fairmont Gold lounge, taking up all of the 18th floor – see a video below – and Fairmont Gold rooms (see another video, showing suite 15-010). 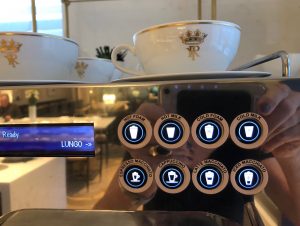 Champalimaud style is so recognisable, namely chic and sleek, white and bright, with lush fabrics and considerable use of soft blues. The Fairmont Gold lounge has so inspired all those working there that they seem to smile, nonstop. I felt spolt for  choice as there are so many sitting areas, with two, four-metre long gas-fuelled fires and a library with really covetable hardbacks. But, it is important to say, the tradition of the Royal York has not completely disappeared. Gorgeous stylish tabletop china, for instance, bears a suitable crest. Downstairs in REIGN bar the Nikolaus Wilhelm Schimmel grand piano looks as if it has been here since the hotel’s first opening party, in 1929. 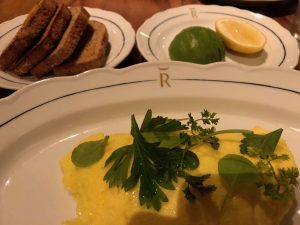 ..and gold logos for eggs

The re-opening by the Mayor of Toronto on 11th June 2019 and parties on 24th June must have been amazing affairs – there were in fact three concurrent parties, one hosted by Canada Fashion Awards (this is a country that loves sartorial specials, there is a four-day event coming up, starting 22nd August 2019, honouring African Fashion Week).  There certainly is no shortage of the fashionable and the discerning, praising what has been done here at the hotel.  Take the main restaurant, REIGN, like a series of small rooms in a big private house. I sat with the hotel’s GM Edwin Frizzell for a deliberately national dinner, East Coast oysters followed by Ontario lamb chops. 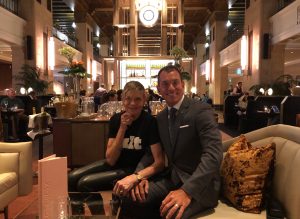 Edwin Frizzell, possibly a frustrated designer of both interiors and landscapes, is now frustrated no longer.   Inspired to work in this lovely industry by Arthur Hailey’s book Hotel, he started creating this renovation when he arrived here in 2014: for five years, just as a two-star Michelin chef awakes every morning dreaming of his third star, he has been working on this new look, travelling frequently with the hotel’s lead owner to talk to, commission and work with designers and suppliers.  In REIGN, one bar area cleverly converts to a working bakery at breakfast time. The long desks for checking in and out have been subtly removed from centre stage by putting them three steps up and ten steps back, but either side there are elegant curved walkway approaches for those with wheelies or baby buggies. This whole luxury hotel is now a theatre, beginning to end. NOW SEE THE HOTEL’S MAGNIFICENT NEW LOBBY, SUITE 15104, AND THE FAIRMONT GOLD CLUB LOUNGE