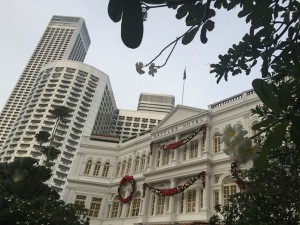 Swissôtel (the tall one), Fairmont and Raffles

There is something about modern Chinese art and sculpture that can only be modern-Chinese. The gal thinks of anthropomorphic sculptures in the Tony Chi-designed loft suites at Park Hyatt Shanghai. Here, in the Peacock Alley walkway between Singapore‘s Fairmont and conjoined Swissôtel Stamford hotels, there is an art-to-sell store that always amuses and delights. These two hotels, by the way, are truly significant. First, the twin tower-complex was designed by I.M. Pei, whose other noteworthy hotel is Four Seasons New York. The towers opened in 1986 as Westin, but in 2007 the shorter tower became Fairmont and the taller one, which is 741-feet total, is now Swissôtel Stamford. It is, by the way, 1,336 steps up to the rooftop helicopter pad: the annual vertical marathon the other day saw the winner run up in under seven minutes. 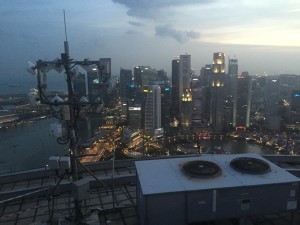 Looking down from Swissôtel’s rooftop

I was up there, admittedly not via all the stairs, to watch the sunset. While it was still light the view was magnificent. I even looked down at the top of Marina Bay Sands. This is truly akin to the view down from the world’s tallest hotel, Ritz-Carlton Hong Kong. It also recalls standing on the cantilevered 28th-floor helipad of Burj Al Arab in Dubai. Last time, or rather the only other time, I was up here on Swissôtel Stamford‘s rooftop, Anton Mosimann was serving canapés, but why and for what reason has faded into obscurity. Tonight, as the light fades, a bottle of Moet 2006 is opened, and beautifully poured, to go with bite-sized smoked salmon lollipops. There is of course a glass to hold discarded lollipop sticks (well, what would one do with the sticks otherwise?). 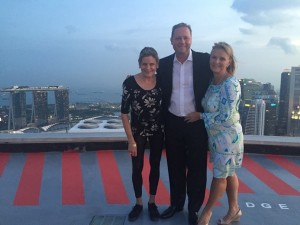 Tom Meyer runs this whole massive complex, which together comprises 2,030 rooms, which means constant coming and going. I still think that my favourite rooms, by the way, are on the 65th floor, so handy for the lounge, and also for the adjacent gym, which saves the time involved in going to the main gym, attached to the Willow Stream Spa. Tom and Claudia Meyer remind me of another time we were all together, in a Hummer going to a Pierre Gagnaire dinner in Dubai. Since then the Meyers have been, briefly, based in Bali and then, for longer, back in Manila. Singapore, it seems, is a destination all hoteliers seem to like (one, who relocated here from Tokyo, says there is simply nowhere else left to go). Now, as conversation flowed, it was completely dark, and red and green lights revealed the presence of a drone silently viewing the city, while two pairs of bright red lights marked the top of newcomer The South Beach. 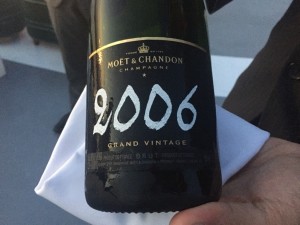 We moved downstairs, or rather down three flights of fire stairs, to Jaan, the 70th floor signature restaurant that M.P.S. Puri opened here some years ago – that guy left two signature restaurants in his Singapore wake, the other being Raffles‘ Doc Cheng’s. Jaan‘s Devonshire chef Kirk Westaway, back from a holiday, is full of enthusiasm. What should we eat tonight? I go for burrata with asparagus, and an Irish ribeye and lots of vegetables. We drink New Zealand Sauvignon Blanc (Cloudy Bay, natch) and Australian Cabernet Sauvignon (Geoff Merrill, also naturally if you are with the Meyers – this one was a 2007 Reserve). Over half the other diners in the full 45-seat restaurant are not staying in this luxury hotel, and like them, when our meal is finished we take an elevator down – no vertical marathon at this point – and out into the night