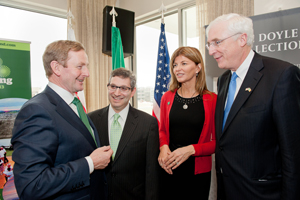 Sometimes a gal is in the right place at the right time.  Last Saturday she was in the centre of Ireland-USA, namely staying at the so-suitable Dupont Circle Hotel.

Why so suitable? This Irish-owned, Irish-run luxury hotel is perfect base at any time, particularly at St Patrick’s Day).  She had a truly memorable stay.

As she checked out, of fabulous suite 901 with its private terrace looking over Dupont Circle and right up to Washington’s National Cathedral, an army of cleaners must have rushed in to tidy up ready for the arrival, at most a few hours later, of the hotel’s owner, Bernie Gallagher, Chairman of The Doyle Collection.

She, with the company’s CEO Pat King, flew in to get ready for the visit the following day of Enda Kenny, Prime Minister (in Gaelic, Taoiseach, pronounced tee-shock).  He was in town to say hello and to help publicise the forthcoming direct flight, United Airlines linking Washington DC with Dublin.

Guess what, travellers from Europe, it is worth stopping off in Dublin and then flying on from there to the USA as you can pre-clear US immigration before leaving Ireland.  What an incentive…

Interestingly my little department store in my little local town back home is celebrating its 110th anniversary but we do know that Australia is very young so 80 years for anything there is momentous (interestingly, too, some of the convicts who were sent to, and later settled in, Australia came from near my home – on my way to London Heathrow airport I pass a pub called ‘Botany Bay’ and also a rare red signpost which is where chains of convicts would gather before deportation Down Under).

Anyway, back to Sydney and its Harbour Bridge, which some call ‘the coathanger’.  It took six years to construct.  It is made of steel, and has six million hand-driven rivets.  That means one million rivets a year, 1.9 rivets each minute if working 24/7.

When it opened it cost each car six pence to cross, whereas a horse and mount was only half that, but you can cycle for free or, as I did when back in super-Sydney a few weeks ago, run across from CBD (Central Business District) to Kirribilli and back.  Closest hotel for keen bridge-runners is Shangri-La Sydney.

Groups of up to 14 climb up, and over, the Bridge

It is also the closest hotel for bridge climbers.  Yes, brilliantly, you can – and should – climb over the bridge.  All this is thanks to Paul Cave, whose father-in-law lined up for two days to buy the first rail ticket for the first-ever rail crossing of the bridge, which was March 20th, 1932, a day after the structure’s official opening (Cave still has the ticket, number 00001, from Wynyard to Milson’s Point Station.

In 1989 he organised a climb over the Bridge as part of a business convention, and then he worked by hook and crook (no, not the convicts or their offspring) to make the climb into a commercial entity.

Happy couple on the Bridge, looking down at the Opera House

At last count, 2.8 million people have done Bridge Climb since it opened 1998 (in 2001, Paul received the Ernst & Young “National Entrepreneur of the Year” award for the “Business, Finance, Property and Services Tourism” category.

In 2002, Paul was acknowledged with the National Australian Export Heroes Award). I went by daylight: you can now do night climbs, propose-to-your-loved-one climbs, families-together climbs.  The main Bridge Climb is 3.5 hours in all, including pre-climb preparation and photo-time at the top of the bridge, 134 metres above the water.

You are chained together, yes, just like all those 19th century convicts.  You are chained to ropes on the bridge.  You wear a grey boiler suit, your glasses and a handkerchief are held on. Nothing must fall down into the water.

It is totally exhilarating – a near-centenarian has done it, babes-in-arms-have done it, let’s fall in love (with the Bridge, at least).  Happy birthday. 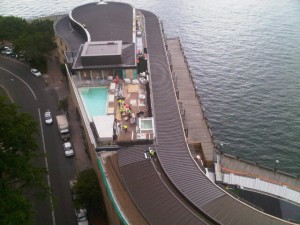 You look up at the Bridge, high above you, if you stay at Park Hyatt Sydney, now fully open again (look down, from the Bridge) at the hotel’s new top floor).  You look out at the Bridge from many rooms of Four Seasons Sydney.

Wonder how many of Sydney’s central-district GMs of luxury hotels have done the climb – how about it, bosses of those, plus the Hilton, InterCon and, of course, The Observatory, a Leading hotel and sibling of the Orient-Express hotel I have just been in, the oh-so-relaxing Inn at Perry Cabin.

If only Orient-Express would have hotels in all main cities of the world, but in general it prefers country-set leisure destinations, plus anything with a hint of Botswana, Italy or Peru.

If only, for a few more wishes.  Firstly, hotel bosses who actually practise keeping fit have a big plus in so many ways. Before hosting lunch-in-the-sun at Mandarin Oriental Washington DC, Mandy Scott – who now professionally works under her married name as Amanda Hyndman – had taken a hearty Potomac walk with her husband.

Across town, at Four Seasons Washington DC, Christian Clerc was getting ready for the marathon (the owner of that hotel, Lawrence Geller, is a multi-marathoner of many years’ standing, or rather running) and at Fairmont Washington, Mark Andrew, practising what he preaches, the following day led an 0800 cycle ride. 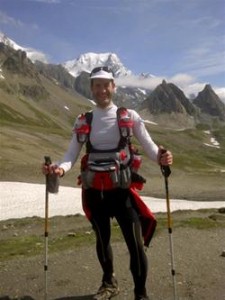 Philipp Mosimann in Nepal, getting ready for a six-day run

And then there is Andrew Harrison, at Four Seasons Mumbai, who has climbed most mountains known to man, and his newly-arrived colleague in Punta Mita, John O’Sullivan, who enjoys seven days’ walks as he can write more poetry.

But one of the top accolades must surely go to Anton Mosimann’s two sons, Mark and Philipp, who now jointly run Mosimann’s Club, London.  Every year, it seems, they head off for another week-long RacingThePlanet ultra-marathon desert run.

They have already done five – Atacama,  Gobi, Namibia, Sahara and Vietnam – and this year RacingThePlanet did its first mountain run, 250 kms in Nepal. 200 competitors took part, including the Mosimann pair and Mark’s wife Jenna, all three sponsored to benefit The Prince’s Trust.  Their goal was £5,000, and they have already raised £5,190, via JustGiving.