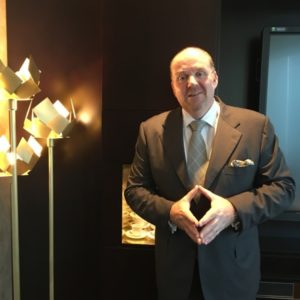 Jumeirah Emirates Towers consistently wins awards as Dubai’s best business hotel, and even best business hotel in the whole Middle East and, some say, in the entire world? Why? The gal has some of the answers. It is imposing outside, rising up to 51 floors. Inside, you go into one of the lightest and most attractive open atrium lobbies anywhere – see above. The flowers are even more stupendous (they are now done inhouse, by the hotel). The grand piano has moved, but only 20 yards, to the Rib Room, which is now overseen by the hotel’s hyperenergetic GM Sven Wiedenhaupt, who has also simplified its menu. 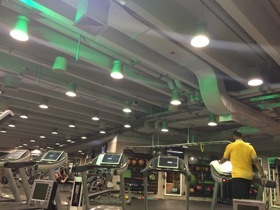 The Rib Room does have, incidentally, a collection of named steak knives and I cannot wait to o back, to eat, and see if my knife is still there, displayed next to such a high and mighty listing it makes me ultra humble. Also new, introduced by wonderman Wiedenhaupt, is a champagne tub, and an express lunch that offers one course in 20 minutes, two in 40 minutes and three in an hour – the biggest steak here is a 1.2 kilo Caveman, but for smaller appetites a 180g bottom sirloin flap will probably suffice (not sure I would go for a ribeye covered with a blue cheese and truffle crust, but everyone to their own taste). Before eating a Caveman, I would go for a good workout in the excellent gym. 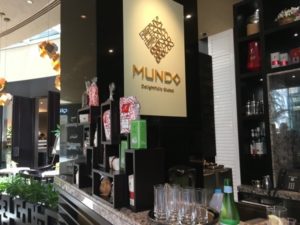 Entrance to the new Mundo

Every taste is catered for at Mundo, the renovated all-day, all-new restaurant that has seen number of meals soar by 20 percent since it opened. Part of the lobby walkway, previously outside the restaurant, is now a conservatory-type sitting area. Inside, fixed buffet stations include a sushi kitchen. It works perfectly, and it has probably helped take the hotel up from 18 on Tripadvisor to number 12, in one year. See the video below, in which Sven Wiedenhaupt explains the new-look restaurant. He is a three-boiled-eggs at breakfast man, and he believes that good cuisine requires all the basics to be done not only well, but beautifully. 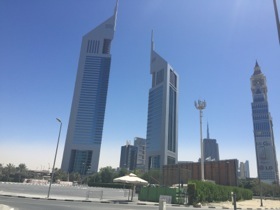 The striking pair of Emirates Towers

He is on to so many ideas. He is currently upgrading meeting rooms, formerly rather-sombre but now exciting, open your eyes and work harder Art Deco spaces, in beige and cream with dark highlights, and of course latest technology, and breakout spaces have fixed serving areas that look like kitchens back home, just waiting to ply meetings goers with food and drink. And I remind myself yet again that this is, indeed, a luxury hotel, in a pair of towers that looks more like a sculpture than an accommodation block, that understands top business needs.