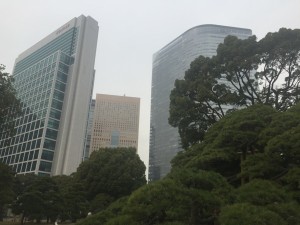 Looking up at Conrad Tokyo, on left

The luxury Conrad Tokyo hotel overlooks Hama-rikyu Gardens, described, says the gal, as Hama Palace, where sea breezes blow as a reminder of the Edo era. The gardens were the outer fort surround for Tokugawa Shogun, and here, in 1654, Matsudaira Tsunashige, Chancellor of Kofu, built a beach mansion, on reclaimed land. Much much later, this was designated as a cultural heritage of Japan. Less than ten minutes’ walk from Conrad Tokyo, Hama-rikyu Gardens are open daily, from nine a.m., but, remember, you need ¥300 enter – yes, unlike much of the rest of the world, in Japan you pay to go into public gardens. When you are there, stand by the 300-year-old tree, a pine planted by sixth shogun Ienobu, and look back up at the hotel. 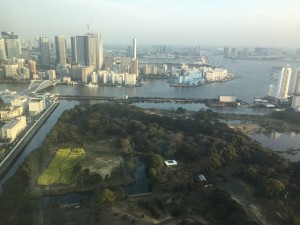 This is a towering structure, with the hotel occupying the top ten floors of Mori Trust‘s Shiodome tower. I was in suite 3733, and my view down to Hama-rikyu Gardens, and Tokyo’s waters and the peninsula which will house much of the 2020 Olympics, was spectacular. One of the many lovely things about Tokyo is that although it is cold in winter, with icy wind-chill, it can be crisp and sunny, too. I look a lovely walk around the gardens and coincided with wedding photos being taken in the rape field, planted, according to notices, November 11th, 2015. The brides must have been cold – I was jolly pleased to get back into the warmth of the 290-room hotel. 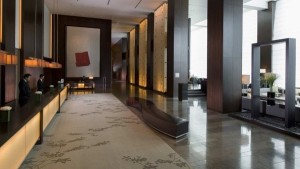 There is a guaranteed sense of calm as soon as you arrive at the 28th floor reception area. Exit the elevators and look down the main front desk area floor to a collage, at the far end, a burgundy diagonal on a silverleaf background (see illustration). This was done by Toko Shinoda when she was 92, says the hotel’s enthusiastic GM, Heinrich Grafe. Shinoda-san came back to visit in 2015, for the hotel’s tenth anniversary – her date was a year older than she, namely 104, and the two appear to have had a great time in their wheelchairs, touring oh so discreetly rather than bumper-car style. 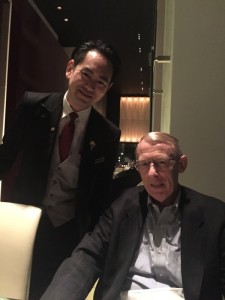 Heinrich Grafe has not been at this luxury hotel long but he seems already to have connected with his 300-strnog workforce. He is passionate about marketing. He has on hand, here, a champion sommelier and, another man, a saké specialist, and he is thrilled that the former, Satoru Mori, will soon be spending nearly a month taking part in the world sommelier championships, then touring, and worikng, in Argentina. Oh, and another big plus this is one of the few hotels that gets more enjoyable, plus more enticing, with every minute… You might even coincide with a geisha show (see the video below)