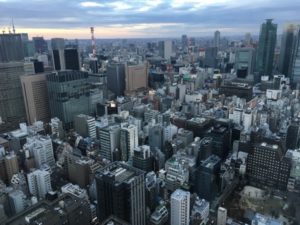 Back at the luxury Andaz hotel, in the exclusive central Toranomon area of Tokyo, the gal knew there would be innovation. Yes, the view from corner suite 4836 is the same – looking down to the so-near Imperial Palace Gardens. But room supplies now include this light, above. It is a Sony Life Space UX glass sound speaker, that for $799 or the nearest online price, apparently gives you 360-degree sound. And light. Individual son et lumière is certainly a first in the hotel world, but then Andaz, from its initial brand as a conversion of Terence Conran’s Great Eastern hotel in London, has always offered firsts. 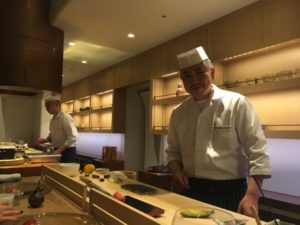 In London, there was no formal check-in area. You were greeted, around a large table, by youngsters holding tablets with registration information. Here, in Tokyo, the tables are three gigantic shapes of Hokkaido walnut and people sit around them, day long, helping themselves to coffee, tea and soft drinks. More innovation, here, is the conversion of an outdoor space on the rooftop of the 52nd floor building. There was always a wedding chapel here, and now there is also an eight-seat SUSHI restaurant. Two chefs serve four diners each. Our meal started with 52 Sake, specially for the hotel, and named not only for our location but also because apparently the rice has been polished 52 times. 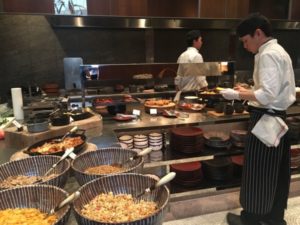 I am sure a sashimi and sushi dinner is very good for the system, occasionally, just as I am sure that the Biologique Récherché treatment in the hotel’s spa is very good for the face, occasionally – more innovation is coming in the spa, where the reception-area Apothecary will have its airy waiting space turned into something more useful. At breakfast in the gorgeous Andaz Tavern, I looked around for innovation, but all Hyatt family breakfast venues in Asia Pacific offer so much food, and generally in a ‘come right into the kitchen’ setting. I do not think, however, I have come across Nutella-filled brioches with vanilla sauce and cinnamon-roasted apples before. 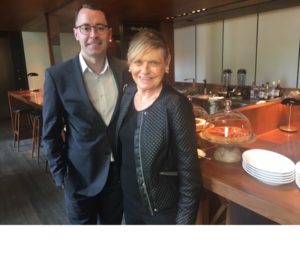 There is innovation galore on the ground floor of this 164-room luxury hotel, where a burger and drinks bar flows out to a sunny conservatory, and to the pavement in summer. Ross Cooper, the New Zealander who now runs this hotel, showed it to me, and told me about the regular monthly runs – last Friday of every month, 8-9 a.m. – for guests and staff. He then introduced me to yet more innovation, pop-up stores that the Mori company is putting up on public streets all around. What with lots of planted trees, and main traffic already diverted underground in a tunnel, this area of Toranomon Hills will soon be as pedestrian-friendly as Champs Elysées.

NOW SEE THE VIDEO OF MY SUITE, BELOW