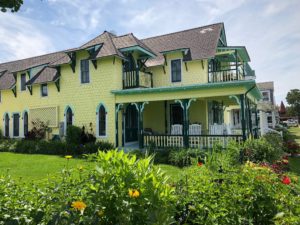 Houses are all colours of the rainbow

And now for a short break from the world of great and unforgettable hotels.  The good ship Seven Seas Navigator is heading north from New York and first stop is Martha’s Vineyard. According to the gal’s Boston friends, there are Martha’s Vineyard people and there are Nantucket people and n’er the twain meet.  Well, having visited the ultra-discreet, and exclusive rather than inclusive, Nantucket, it was time at least to take a glance at Martha’s Vineyard.  Whereas Nantucket is colour-free, with endless timber houses that are merely sun-bleached planks, Martha’s Vineyard is colour-fast.  Some of the island’s six townships say white paint only. Others, say Oak Bluffs township, encourage as much colour as possible.  See the red Norton house, above. 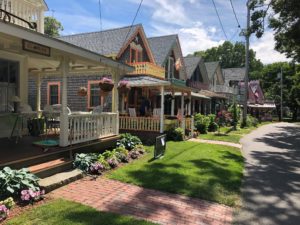 And a colourful row

In 1891 Philip Corbin, a hardware entrepreneur, had built this house, which later fell into disrepair. It was bought exactly a century later by Peter Norton, founding CEO of Norton Utilities anti-virus software, but sadly it burned down in 2001. Undeterred, the Nortons restored it once again, and now it has pride of place around the periphery of Oak Bluffs’ Ocean Park.  Martha’s Vineyard – probably named for the daughter of explorer Bartholemew Gosnold, who had died in infancy in 1602 – is 120 square miles in area, and its year-round population of 15,000 magnifies ten-fold in summer.  Of those who remain during winter, about 20% speak Portuguese, a reminder that their forefathers came from Brazil, or the Cape Verde islands. 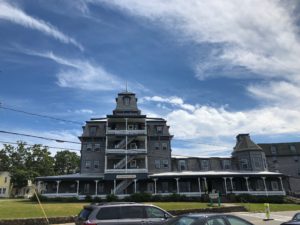 My tour guide, Doris, was a bouncy former flight attendant descended from a pastor who had arrived nearly a century ago from St Kitt’s.  Living here on-island is expensive, she admitted. Using fresh ginger as her Doris Economic Guide, she pays only $1.50 a pound for it ‘in America’, that is to say on the mainland, but here it is $3.50.  Want to buy a house here?  I did see one advertized for $1.9 million but in the main you are looking at $4 million minimum.  The only hotel I managed to check out, Summercamp (shown here), was more hostel than hotel, but costs from $399 a room. As a Boston visitor, Dabuddy, said on TripAdvisor Saturday, ‘thin walls and I could hear baby next door crying and even at far end of hallway I could hear the ding of the elevator every time it passed a floor’. 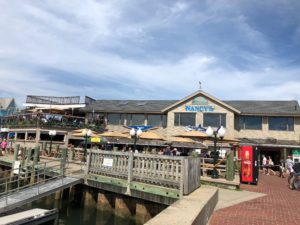 But for college types hanging out with friends, who cares about the luxury of silence? Five minutes’ walk from Summercamp gets you to Circuit Avenue and its side-by-side bars and cafés, places like Nancy’s, which deliberately exudes a Miami Beach ambience. Nancy’s hosts various specialty areas, by the way, like a bar called Donovan’s, name for its Jamaican mixologist (try his dirty banana cocktail). There are venues for noise, here on the island, but there are spots for comparative solitude – I say comparative as even the Norton House has pedestrians going within a few feet and no-one seems to have privacy fences around their property.  It is little wonder there are no luxury hotels here on Martha’s Vineyard. Folks who want those might head for Nantucket.