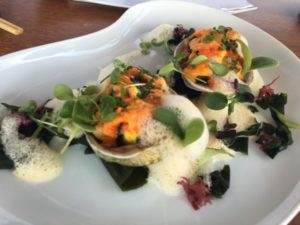 Winter-long, you can dine beside a spa in Geneva – at the luxury Four Seasons Hotel des Bergues, to be exact. It is almost as if they did not have any space for a second restaurant here, which, says the gal, is probably the case as the hotel needs all its 103 bedrooms and they do not exactly have any additional unused areas. That is why, after many years of planning, in October 2013 they opened the spa, added on to the roof of what had been a six floor hotel. And with the spa and its pool came Izumi, Japanese Fusion meets Nikkei cuisine. There are only 25 seats, and some of them are in the well-stocked library. In summer, however, Izumi moves up to the rooftop, and fortunately, this visit, it was summer, so I was able to eat there, outside. 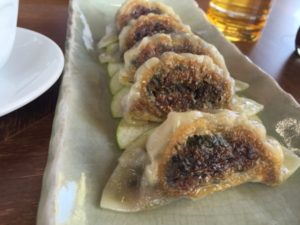 Lunch is any time but dinner is two seatings, and you must definitely book ahead, even at weekends, which is extraordinary in this city that seems, generally, to hibernate Saturdays and Sundays. But Mitsuru Tsukada’s menu and cooking at Izumi, plus the outstanding and thoughtful service, are just too much of a draw. It is also amazing to have, there on the rooftop – a full 175 steps up from the lobby on the ground floor – a 360-degree view over Geneva, Lac Leman and mountains nearly all around. There is a tasting menu from which you can choose several starters, from a list that includes  Seabass Sashimi Yuzu Juice and Miso Crush; Tuna Tartare With Gochujang Sauce on Crispy Rice ;  Yellowtail Sashimi with Chili Pepper;  Salmon Tataki, Spicy Mustard Miso Sauce;  Roasted Scampi, with Vinaigrette Shiso Dressing . 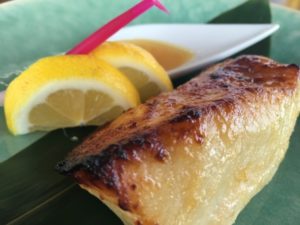 Then proceed to one main course – or do as we did, and go à la carte throughout. My meal was totally divine. After the Seabass Sashimi – see at the top of the page – I also had a taste of  another totally mouthwatering dish, which appeared to be half a mini beef Wellington, or a lump of wagyu cooked in a dumpling. Eulogistic is an understatement for this dish, which preceded my main course, Black Cod with Miso, and a side order of Spinach Salad with barely-visible Parmesan. No wonder this is such a popular restaurant, but then it seems that everything this particular hotel does works out. 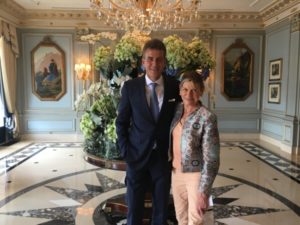 Martin Rhomberg, the GM, who has recently relocated here from St Petersburg’s Four Seasons Lion Palace, is sanguine about continual surprises here in Geneva (‘struth, he must have had surprises galore in Russia, as was certainly the case at his hotel before that, the short-livid Four Seasons Caracas, Venezuela). Now, he says, he has the best of both worlds. As well as being GM of this stylish 103-room hotel, he also oversees spas for Four Seasons throughout Europe and the Middle East. There is lots of travelling to do, he admits, which just makes this Innsbruck Austrian all the more pleased to be home, close to mountains in Switzerland. On my way out I raved yet again about the hotel’s gorgeous lobby flowers, which are completely redesigned every week by Sergio Mazzetta.