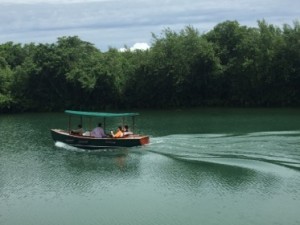 Enroute to ILTM Americas, via a Mayakoba lancha

It is ILTM Americas once again, and the gal, like all those involved with luxury hotels who care passionately about the Latin American market – and more – is back at unique Mayakoba, on Mexico’s Riviera Maya Atlantic coast. Why unique? It is 1,605 acres bordering 11 miles of perfect sandy beach. Slicing through those acres are miles of inland waterways, ideal for lazing around on the river, in a silent electric lancha. Get from one to another of Mayakoba‘s resorts, Banyan Tree, Fairmont and Rosewood (and, from third quarter of 2016, Andaz as well). Get to the 18-hole Greg Norman golf course, or the new El Pueblito village. 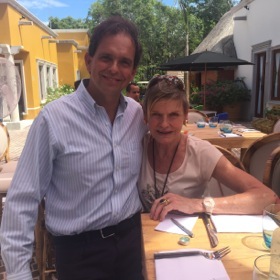 We lunched there, in the village square, hosted by Agustin Sarasola, CEO of the entire Mayakoba project, which will have cost a billion dollars by the time it is finished. Still to come, apart from Andaz Mayakoba? Residences, plus a development of 70 Fairmont Heritage Place vacation ownership villas and, across the main road, thousands of homes for Mexicans. Agustin Sarasola is a busy man. Apart from anything else, he is interviewing, three replacements for the one and only James Batt, a Brit who heads operations and marketing for the entire complex as well as finding time to photograph some of Mayakoba‘s 150 different bird species, resulting in two best-selling books. 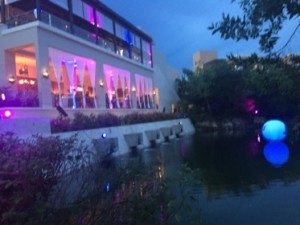 We were all busy, those days in Mayakoba. Monday, September 28th, 2015, saw the ILTM Forum, introduced by ILTM Senior Director Alison Gilmore. Fascinating futurist Greg Lindsay shared how cities will be theatres for around 80% of the entire world’s population, up from 50% at present. 23-year old Alex Banayan showed how variously to leap off-stage and fall to your knees without losing your balance (and talking, simultaneously, about interviewing Lady Gaga and Eric Schmidt), and geography grad Tom Marchant shared how working in Moscow and an addiction to travel led to starting England’s first Virtuoso-level travel specialist, Black Tomato. 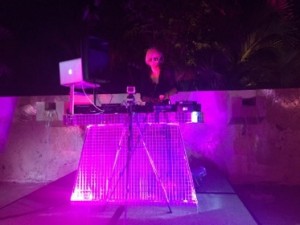 .. and the female DJ was compelling

And after the Forum, Fairmont Mayakoba, main site of ILTM Americas as it has a massive conference centre, which has just been expanded, threw the welcome party. Brilliantly, Dennis Clark, GM of this friendly luxury hotel, decided to hold it inside, in the hotel’s El Puerto restaurant, downstairs, and, at the same time, upstairs in the open-sided lobby, which fortunately now has a permanent bar. This meant that about 650 partygoers – the exhibitors, the buyers (travel agents) they had come to meet, and media who included such publications as Forbes, National Geographic and the Washington Post, could network and network and network.  To be continued…