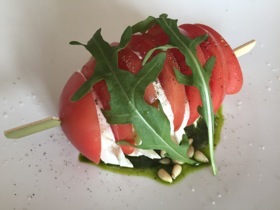 This, Mandarin Oriental Tokyo, is a luxury hotel that likes to do things differently. The gal ordered a simple room service lunch, as basic as you can get. First, caprese, which turned out to be two carved wooden skewers holding alternate circles of beefsteak tomatoes, and buffalo mozzarella, with lots of pesto, and pine nuts, underneath. Even though they were not requested, there were four really warm, just-baked rolls, and two butter rounds, under tiny glass cloches, one plain and one herb-flavoured. 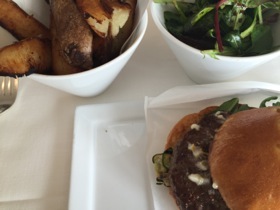 And then the burger, described as having a green olive bun and marinated zucchini. The bun, which I did not eat, was indeed studded with olives, and instead of the fries I usually associated with a burger I had a bowl of just-cooled potato wedges, and another one of salad liberally dotted with balsamic. Yes, they do things differently here. On the food side they hosted Danish super-restaurant Noma for six weeks. After negotiations with the restaurant’s investor Claus Meyer, its culinary genius, René Redzepi, moved here lock, stock and barrel, a team of 40 in all, flown here and back by SAS (the team had 26 hotel rooms, and ate in the staff canteen). Only guests staying in the hotel could get one of the coveted seats – 56 every night. There were over 60,000 enquiries, and lucky diners came from as far as Australia. 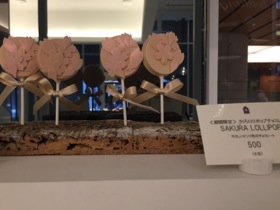 The interior of the hotel’s Signature restaurant was Japanized, with washi paper screens through which delicate trees protruded – a septuagenarian tree artist drove here every other day, seven hours each way, to tweak the bows to utter freshness. Noma is now gone, but a sense of delicacy remains. Down in the ground floor podium, fronting on to Nihonbashi, is the hotel’s Gourmet Shop, currently featuring cherry blossom edibles, including cherry blossom lollipops. Groumet Shop does look like a Parisien brasserie – it is designed by Shinichiro Ogata of SIMPLICITY, who has also done the wedding areas at Andaz. 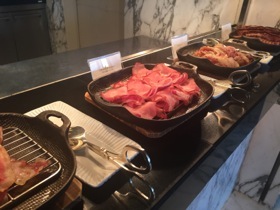 Some of the four bacons on the breakfast buffet

This luxury hotel actually has three Michelin starred restaurants – GM Tony Costa is as proud of these accolades as he is of recently getting Forbes‘ top, five-star, award (there is honestly no credibility in any award of more than five stars). The hotel also warrants a special award from the world’s bacon industry. The breakfast buffet includes delectable Caspian Sea yoghurts and freshest mango slices, and superb rice-flour brown bread, but also no fewer than four different bacons, including crispy back and crispy streaky. How about that for quality?