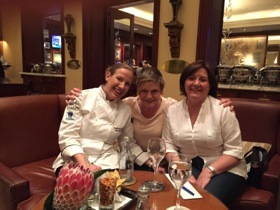 Three little girls from school are we, it could be said, as the gal meets up with friends, here, in the lobby bar of Table Bay at the Waterfront, the luxury hotel that towers over Cape Town’s V&A Waterfront development. On the left is Jocelyn Myers-Adams, the Ontario-born chef of the hotel who is married to a Cape Town local. She has been foraging on Table Mountain today, taking a group to see what they can find that is edible (Noma‘s René Redzepi did this too in Japan when he was doing a six-month pop-up restaurant at Mandarin Oriental Tokyo). Alison Gilmore, with only one more day of ILTM Africa to run, is sitting down for a rare few minutes. 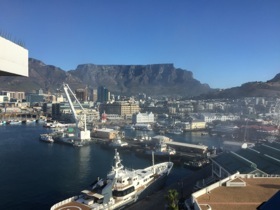 Ah, Table Bay. I look out of my window – suite 834, up in the eaves of the eight-floor beauty – at a view that could only be Cape Town. No wonder this cosmopolitan city, a blend of national tribes, Cape Coloureds and Afrikaners, Indians and British and other European-heritage, plus tourists, is unique. Nowhere else in the world has a view like this. And at times like this no-one else has the weather, although in the early mornings the mist can roll in. Capetonians have some definite characteristics. Late breakfast, word hard, visit one of the latest hole-in-the-war bars after leaving the office, and head for the beach, or perhaps the vineyards, at weekends. 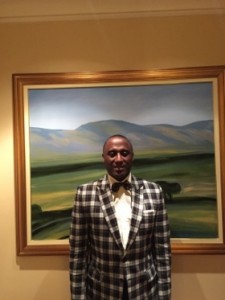 The hotel, also, is unique. When it was opened, by Nelson Mandela, in 1997, it did have something of a Disney-movie set about it but now it has matured into a strong personality. At least part of this is thanks to the GM – add another unique character – Sherwin Banda, a strong-willed, perceptive local, a lawyer and retail specialist who is as at home in the USA as here (he is always recognisable for his seemingly-endless succession of jackets, often tartan, with complementary bow ties). He has commissioned a beautiful book, 25 Years, by Tudor Caradoc-Davies, to celebrate the hotel’s quarter-centenary and it is fascinating to see the evolution from deserted wharf to the thriving V&A Waterfront, of which the hotel is part. 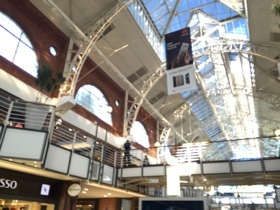 Looking up at the Mall’s conservatory roof

This is one of the few luxury hotels that is conjoined, walk through a retail corridor, with an absolutely firstclass mall. I coincided at the 328-room hotel with a buy-out incentive from China. They had found the mall, and cleaned the Pick’n Pay supermarket of baby milk powder, any size, and the jewellery stores of merchandise, any design, any price. Hey ho…