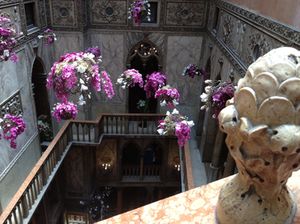 Flowers appear to float in the Danieli’s open atrium

How do you decorate your hall, the gal wonders, if it is five floors high, and since it happens to date back some 600 years the authorities will not even allow you to stick a pin in a wall?  One way, as the powers that be at the Hotel Danieli, Venice, have found, is to string flowers, on nearly-invisible threads, across the atrium.  Since the overall colouring of the lobby and its adjacent Dandolo Bar are, well, fairly dark, and the people working here all seem to wear black, the flowers stand out all the more.  You see them magnificently if you eschew the luxury hotel’s compact elevators in favour of a healthy hike up a variety of staircases – 107 steps from bottom to top. 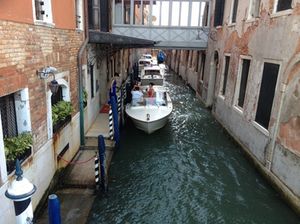 Two of the palaces are joined by an air-bridge

The hotel as it is today is actually three old palaces. From San Marco piazza, walk 100 yards, over one canal bridge, along Riva degli Schiavoni until you get to the San Zaccaria ACTV waterbus stop. At that point, on your left, first you come to the cream Danieli, next the pink Dandolo and, over another bridge, to Casa Nuova, another cream building joined to the Dandolo by a second floor airbridge.  The hotel spreads through all three buildings. The Dandolo palace, which has the already-mentioned lobby, was built by Enrico Dandolo, one of four in that family to become Doge: during his tenure he seized Constantinople and presented Venice with the statue of four horses that still stands in front of the Basilica in San Marco (they form the logo of Starwood’s Luxury Collection, of which this hotel is one). 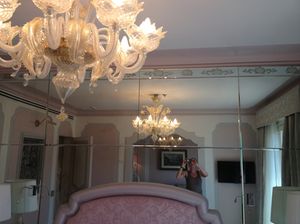 Some of the rooms, like 115, have just been lightened-and-brightened by Pierre Yves Rochon, who seems to like nothing better than an historical challenge.  115 is palest pink and palest grey, the kind of colours a maiden aunt would wear in a Noel Coward or, at opposite extreme, a 13-year old wants-to-be-a-model at the Derby.   There are two eight-light golden chandeliers – Murano, of course. The toiletries are also Italian, Laura Tonnato for the hotel (gosh, since first seeing her name at Park Hyatt Milano, she seems to be everywhere). 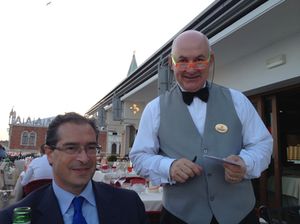 Thank goodness they did not give Jacques Garcia the rooms to redo – he would have plumped up fat headboards and put in dark colours, as he did in Bordeaux.  He has done the Danieli’s fabulous rooftop restaurant, which is Garcia-Gothic inside, but during the long summer everyone eats outside.  Now did I say everyone here wears black?  Look at restaurant manager Giulio’s two-tone glasses.  He has a different pair for every day, apparently. He has an especially big welcome for the marvellously named Antonello de’Medici, who heads Starwood’s hotels in this fascinating city. 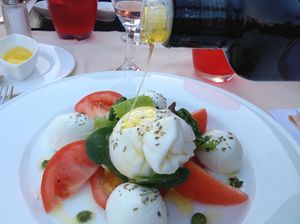 Antonello de’Medici has been visiting local wine producers all day long – he is setting up a wine-and-tapas concept here.  We talk about Carnevale – this is the hotel for glamour, he says (Gritti is for atmosphere, Westin is understated). For some days the glamorous (and rich) have been flocking in from all over the world to an invitation-only trunk show hosted by a major jewellery brand. Extra security is needed – yes, more men in black. I concentrate on my colourful starter, buffalo mozzarella and tomatoes with a misticanza salad and, topping the whole, a superb Andria burrata. 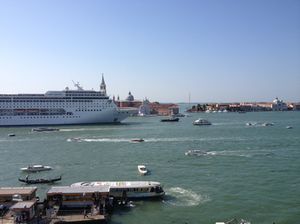 A ghastly mega-cruiser glides into view

The sun has now long since set. Looking straight ahead, we can the lights, up in the sky, of the Cipriani’s sensationally-mad dinner hanging from the top of a crane.  Back up on the luxury hotel’s restaurant terrace the following morning, for breakfast, I watch the criss-cross of ACTV water boats, and on-demand water taxis. I then see the only two ugly things in Venice.  One is the pale pink Marc Quin nude sculpture of the sadly physically-handicapped Alison Lapa when she was pregnant (it stood on the empty fourth plinth in London’s Trafalgar Square for a time and it is here for the Biennale). The other is the arrival of one of the far-too-many mega cruise ships that tower over Venice when they visit.  But, as Mrs Lincoln could have said after her husband Abe was assassinated, everything else about the play was sensationally enjoyable.  Sorry, I lie. There is one more ugliness, and that is the western tourists – why is it that Asian tourists, in general, look so good?