The gal is horrified by women-only bedrooms in luxury hotels (they need magnifying mirrors just as much as men and, believe it or not, they can sometimes do with a razor, too). But she does rather like the idea of rooms themed for amazons and other illustrious members of the fairer sex. 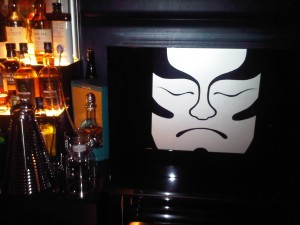 At the beautiful St Regis Osaka, some rooms have their curtains held back by massive, foot-wide ‘jewels’ of tie-backs.  Some have wall panels of lacquered silverleaf. Go to the main bar and you smile, your mouth maximum-wide.

St Regis has strict brand standards (babies’ cots come blanket-less, determined by company lawyers back in the Great US of A, just in case your infant smothers itself in a company cover). One of the – mostly sensible, admittedly – standards is a giant painting behind the bar.

This is a tradition started by Maxfield Parrish’s Harvester painting in the King Cole Bar in the originally St Regis New York, built by architects Trowbridge and Livingston for the Astor family in the 1900s.

When the box is open, another mask says 'bar open'

Here, the behind-bar painting is a collage of the history of Osaka.  But look what the designers have done… either end they have put a black lacquered box, about 20 inches across, with a stylised Kabuki mask facing you, the onlooker.  See this, on the closed box, and it means, sorry, ‘bar closed’.

At other times, the box is open and on the red inside of the open lid you see another mask, smiling.  This means, happily, ‘bar opened’. So you can drink your brand-standard Bloody Mary, here a Shogun Mary, with wasabi, and feel, well, bloody good.

The neighbouring Italian restaurant La Vedata is, like its French sibling, designed by Yasumichi Morita of a Japanese company called Glamorous, which sounds very appropriate as he has been part of the glamorous travelling club  put together by Tokyo’s own Bill Fischer, the one and only Seia Lee. (She, the sister in law of Masayoshi Son, the boss of Softbank, has been known to take ‘her friends’, the Jetsetter Club, for an all-white party to the real One&Only, Reethi Rah in the Maldives).

Dom Pérignon and Krug truffles at the bar entrance

Downstairs, doing French, Morita-san copied elements of what he had done for Kitchen in W Hong Kong, which has display cases filled with sculptures of what look like dozens of white china pots.  Here, for Rue D’or, he has ceiling-high shelves holding white plaster books, and drinking vessels.

Cream coloured, they are apparently formed of ordinary twine wrapped round and round metal shapes, and it is a Brazilian living in Paris who had the creativity to think of this construction and the patience subsequently to do it all.

We watched our dinner being created, and then instantly, but elegantly, demolished such Ital-Jap delicacies as olive-studded spaghetti with uni sea-urchin on top, and an extremely elegant Kyoto beefsteak, served as slices with a boiled turnip and garlic-sautéed spinach. 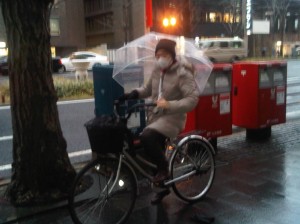 Cycling in the rain, umbrella and telephone in hand

This went magnificently with Ca’Marcanda Promis 2009 Gaja, and with a handsome young local guy in full morning suit who sang arias, also magnificently, on two occasions during the evening (the hotel has jazz in the lobby on occasions, a newly-introduced St Regis initiative resulting from a partnership with the American Jazz Center in the Lincoln Center, New York).

Many St Regis brand standards are simply superb. Butlers are there, but they know to remain invisible until summoned.  After dinner here, you might return to your room to find a personalised note, neatly handwritten, offering you complimentary pressing, please call butler Matsu.  At other times, you are presented, say, with a small bowl of strawberries, with a note telling you which island they have come from.

An ancient temple somehow survives in this modern central-city street

I go out shopping.  According to the excellent Japan: A Monocle Travel Guide that came free with the current issue of Tyler Brûlé’s Monocle magazine, I should head for Necessary Or Unnecessary NOUN bag shop, or Jazzbo Record-Mart, but it is raining, and I give up.

A salaryman cycles past, holding his umbrella and working his phone at the same time.  Amazingly, in amongst all the highrises that are Osaka, there is still an ancient temple.  I head back to the hotel, where a bellman furls my umbrella and puts it in a fabric bag.

I am put into a golden Mercedes and driven to Shin (new) Osaka train station, designed by Eiji Mitooka, the chief bullet-train designer. He put in over 200 shops here and there are some selling ‘souvenirs from Kyoto’, say.

Instead of buying a gift in Kyoto to bring back here to Osaka, buy it when you get here, clever… Bullet trains – Shinkansen – came into play for the 1964 Olympics (oh, wishful thinking, if only the London Olympics were to leave such a legacy…).

My Nozomi comes in on the dot of 3pm.  I am standing by the six sign. Door six stops to the exact spot, I get in, go to my seat – which has an electric socket, US two-pin style – and off it is, for yet more luxury travel.  What a wonderful world.