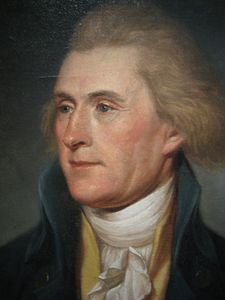 From one Founding Father to another.  The gal has left William Penn behind in Philadelphia, and now she moves on to the capital of the great U.S.A, Washington D.C.  It is now time for Thomas Jefferson, and the luxury hotel that bears his name. This was actually a stroke of luck: back in 1923 Jules Henri de Sibour built blocks of apartments for Washington society and his third block was called after Jefferson, which now is greatly to the building’s advantage.  It is now The Jefferson Washington D.C., a stately classic-style eight-floor C-shaped structure, bearing considerable similarity to the University Club one block south on the opposite side of 16th Street – another de Sibour design. 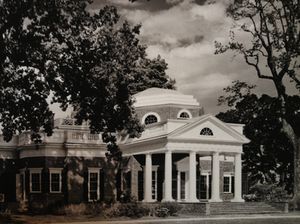 Jefferson was as eclectic in his talents as Leonardo and, like that Italian all- rounder two centuries before him, Thomas Jefferson, 1743-1826, could turn his hand to anything, from being principal author of the 1776 Declaration of Independence, and the third President of the United States, through his knowledge of wine and his architectural skills.  Galliani Fine Arts, the company of Charlottesville VA-based photographer Eduardo Galliani, has published a stunning folio of Jefferson architectural photographs (well worth getting, and framing for posterity).  It includes the Virginia State Capitol in Richmond VA, the University of Virginia Rotunda, and two of Jefferson’s own homes, his country retreat in Bedford County VA, and Monticello, which he started building near Charlottesville when he was only 26. 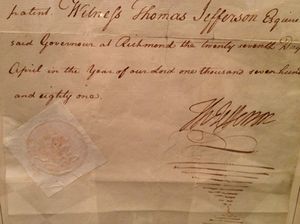 Jefferson was born in Virginia and when he was 21 inherited about 5,000 acres. By that time he had studied, from the age of nine, French, Greek and Latin, and nature: from 15, he added classical literature, history and science; at 16 he entered the College of William & Mary and studied metaphysics, mathematics and philosophy, plus playing the violin. Graduating after only two years, he studied law and was admitted to the Virginia bar.  All the time he was reading – his personal library had over 6,000 books – and writing. One display wall in The Jefferson is devoted to framed original documents, some entirely written (in such legible script!) and all signed by Thomas Jefferson. 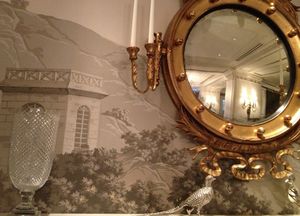 Silver from Monticello, and a Jefferson-inspire wallpaper

The 96-room hotel is also filled with books.  The dedicated library has signed copies by, for instance, David Balducci, Niall Ferguson, Diane Keaton, Martha Stewart, Charlie Trotter, and Alice Waters, all of whom have stayed here at least once. Suite 803, the Thomas Jefferson Suite, has dozens of books on Jefferson, neatly stored on shelves in its office, which of course has a presidential-type desk and chair.  The suite, which looks down 16th Street to the White House, rejoices in two sitting rooms (for one bedroom), and the main bathroom even has a private gym.  Walls throughout are hung with Jeffersonalia, say lithographs of Paris at the time of his travels there.  Down in the main restaurant, Plume, there are original silver ornaments from Monticello – they reminded me of the Patrick Mavros pieces on tables at Mosimann’s in London. 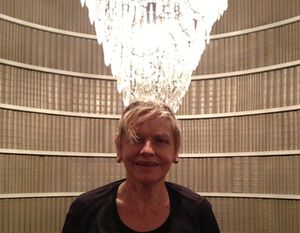 The walls of the restaurant are mostly covered in painted-paper renderings of countryside at the turn of the (18th to 19th) century.  This is what Thomas Jefferson would have seen, in reality…  There is one semi-private nook, the Bird’s Nest, just big enough for a semi-circular bankette around the table (the list of the happy couples who got engaged here is endless, and not surprisingly private). The curved wall here is formed of leather spines of real books. Overhead hangs an elegant crystal chandelier, dated first decade of the 20th century. Apparently this belonged to the Willard family who gave their name to another of Washington’s memorable hotels, and somehow in the 1960s it was purchased by the then-owner of The Jefferson.  Not surprisingly the current owner of what is now the Willard InterContinental is trying, unsuccessfully, to get it back. 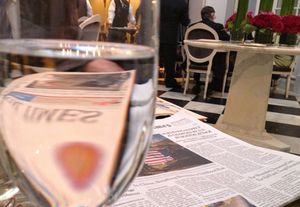 Waiting for your power- breakfast companion, with a glass of water and today’s news

The Jefferson is one of the power breakfast venues in town. I imagine Larry King, who recorded his radio shows here before moving to visuals, with CNN, breakfasting (I saw him once passing through breakfast at the Regency, New York, in a white bathrobe).  Sit here, today, with your Jefferson special, tall or short order of pancakes with lemon syrup and ricotta, and appreciate the fact that because of the barrelled glass ceiling above you cannot hear any of the neighbouring conversations, which must be fascinating, but neither can they hear yours.  This is the place for dining inaudibly, so to speak.  President Obama, as is widely reported, hosts his think tanks of both Democrat and Republican senators here, but they dine in a private room. I wonder if they start their meal with the very-more-ish crab slider mini-bites, and double-fried fries, the specialty of the bar at this special luxury hotel?