And the bedrooms at De L’Europe in Amsterdam do show what a luxury hotel should do… instead of a desk, an enormous table (plenty of space for one’s gear), and free WiFi, and lots of sockets.

And a fabulous bed, Coco-mat base and soft-soft linens, and fibre-optic lights on the bedhead to allow the girl, who was alone on this trip, to catch up in bed with Monocle magazine and other essential reading…

And a deep-deep bathtub with a stainless rack across, for holding books or a bottle of the Billecart-Salmon champagne that was definitely on the list, here.

And a shower with a Victoria Falls of instant water, and big-size toiletries by Blaise Mautin, the lovely Paris ‘nose’ I first came across at Park Hyatt Paris-Vendôme (I met him once, such a gentle man).  Towels that really dry, a door-knob order for breakfast that gives you, with continental, yoghurt and cold cuts.  Yes, this is a generous hotel. 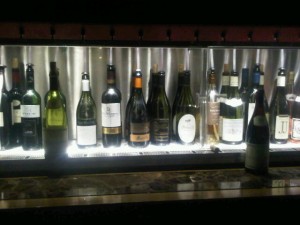 Wines by the glass

It was tempting, in room 156, not to venture out.  This is one of 23 ‘Rembrandt’ suites, not exactly themed (that would be much too crass for Cees Dam, architect and designer of this Leading hotel). But each one of the suites has a two-foot high reproduction of a Rembrandt in the Rijksmuseum only a few minutes away.  This reproduction is by the door. Elsewhere, the suites have two large, like four by five feet, blow-ups of tiniest details of the same painting. Ergo, subtle education as you stay.

This suite, a harmony of saffron, including the ceilings (from which hang, in both rooms, horizontal orange panels), honours The Night Watch, which some say celebrated, for Rembrandt, everything past paired with a new beginning. Interesting.

Were it summer we would all have met up for a cocktail tour out on the hotel’s shiny slipper launch, the same vintage (1896) as the original hotel.  As it was we had a glass of something in Freddy’s Bar – admiring, but not tasting, the John Walker special blend.

We headed to De Hoofdstad Brasserie, met up with chef Richard van Oostenbrugge and admired the 18-bottle enomatic holder (glasses are available in 125cl, 62.5cl or 41.5cl sizes, and the glassware, naturally, is Riedel).

In the morning, my personalized wake-up came, the Wall Street Journal awaited in a leather pouch hung on a gold knob on the outside of my door.  The night concierge let me in to the gym, and at seven, as it opened, I was back in De Hoofdstad, to see what the buffet looked like. 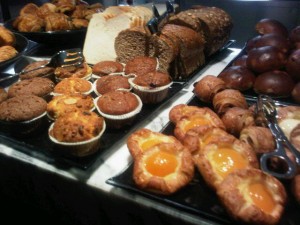 An amazing selection of breakfast breads

I am sure I benefited.  The breads in room service could not have been as copious as these.  The coffee flowed, the juice was fresh, the GM was there (he is always in that time, he swears) and I was seen off, at the exact stated hour, by an ambassadorial doorman in a tall black hat and striped suit.  These people at De L’Europe dress, rather than dress up, they say.

The gal, meanwhile, dressed up in her travel gear and headed off. Another airport, another day.