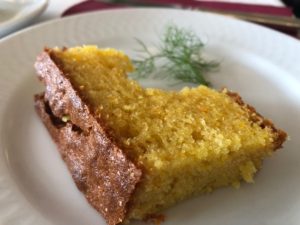 What others call ‘Madeira cake’

With only a few hours on Madeira, the gal had, nonetheless, to head to Belmond Reid’s Palace, Funchal, for one of the luxury hotel world’s best afternoon teas – this one is on a par with those of sibling Belmond Mount Nelson in Cape Town, and, also, with what Fairmont The Empress produces on another island, Vancouver Island, BC. Now many think that ‘Madeira cake’ is yellow, a lemon-flavoured pound cake that goes back at least to the 19th century, when it was often served at breakfast. But what happens at the 169-room Reid’s Palace, built in 1891 by William Reid, a one-time Scottish cabin boy who did well, and became a successful trader (it has been 100% owned by Belmond since 1997. 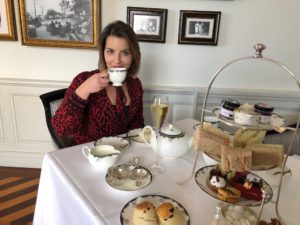 I took tea with Patricia Duarte, the hotel’s communications supremo. Sadly it was too windy to sit at an outside terrace looking far down, near-vertically, to the ocean. I loved the gorgeously illustrated menu. The basic €36 meal lists finger sandwiches, scones, pastries and choice of 25 teas or infusions: more than half choose Reid’s Blend, composed by La Via del Tè. Your tea comes made with leaves of course, in a big china pot, and is poured into the cup through a silver strainer. Some add a glass of Pommery, poured at table, for €18.50. A three-tier etrangère, or curate’s stand held, on top, clotted cream and Madeira preserves: middle tier had crust-free finger sandwiches, white bread avocado-tomato and Portuguese cheese, and brown bread cucumber-chili, prawns, and smoked salmon – on the bottom level were pastries. 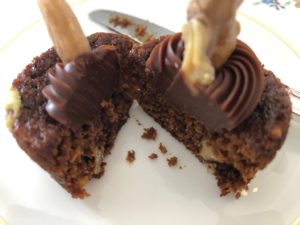 A separate Wedgwood plate held warm scones. Patricia Duarte showed me that the pastries included a ‘real’ Madeira cake. What the islanders call their own is a sugar-cane honey cake, which also includes cider, almonds, raisins and lard, all flavoured with fennel, nutmeg and assorted cloves (Axa, Flower and Maranhão). Known sometimes as Bolo de Mel Madeira, it was traditionally eaten at Christmas. Talking of tradition, with all the cruise ships coming into Funchal these days, it is more and more likely that many passengers will opt for Reid’s, and its afternoon tea: anyone who has a camera takes at least one photo and this is the most-often posted moment, even by hotel guests. In 2018 the hotel saw 61% average occupancy, with five-night stays, and 40% repeats.  UK has traditionally remained the top market, followed by Germany, Netherlands and Scandinavia. The US is growing. 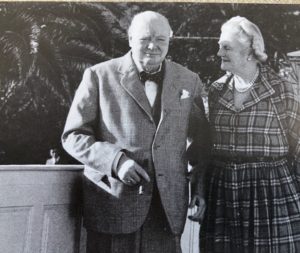 Apparently, according to one of the afternoon shift managers, with the hotel for 33 years, the most often asked question during afternoon tea itself is where Winston Churchill sat. He stayed in this luxury hotel in 1899, on his way to the Boer War, and again 2-12 January, 1950, when, judging by one of the photos hung on the walls that make the hotel seem more like a living museum, he was with his wife, Clemmie.  The last time I overnighted in this luxury hotel I was actually in suite 670, named for the great British leader.  This time, as I returned to my cruise ship, I did wonder if the Churchills had taken an island tour, too, and come across the charming semi-wild sheep who seem to think they have right of way.

SEE THIS VIDEO OF SHEEP ON MADEIRA.