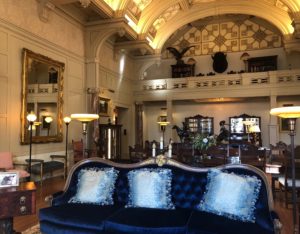 Yes, a four-hour drive, even when mostly in the dark, is worth it when you wake up the following morning in one of the most beautiful natural places on earth, Vermejo Park Ranch, which, from April 2nd, becomes Vermejo Park Ranch, a Ted Turner Reserve. This is just one of Ted Turner’s ranches; he owns over a million acres in the southwest USA and this ranch, mostly in New Mexico though it crosses into Colorado, is over 600,000 acres.  Here, over a hundred years ago, a Chicago prospector, William Bartlett, built a magnificent house, now called Casa Grande – see a video of some of its public areas, below.  Seven of Vermejo Park Ranch’s bedrooms are here, and the gal stayed in its ground floor room (another video below shows it well). All the 48 rooms here are in century-old buildings: all share a main lodge, rebuilt 30 years ago after an earlier fire. 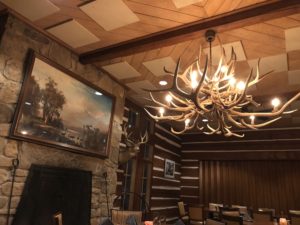 Dine under an elk chandelier

I loved dining in the main lodge under a giant chandelier of sheddings, elks’ discarded antlers: anyone who finds antlers discarded on the reserve is welcome to keep them, or sell them to dealers for shipment to Asia, to become aphrodisiac powder.  I did not eat elk during my stay but all main meals featured bison, which is absolutely fat-free: it was plated at lunch and dinner, preceded by a salad or soup. Breakfast here, by contrast, is an especially good buffet, with masses of fresh fruit and eggs to order, and the urn of flavourful coffee was kept going day-long. There are also coffee makers in Casa Grande, and the other bedroom houses. I must give praise, indeed, to the hotel side of the complicated operations here. The heat controls quickly took my room up to my desired temperature, and having a plausible log-look fire also psychologically instilled warmth.  If television is wanted, yes you have to go to public areas, but WiFi in my room worked just fine, and for faultless Skypes I went to the main lodge. 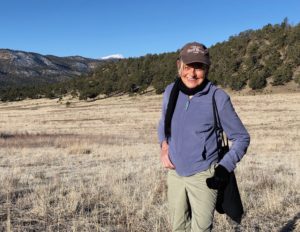 It is activities, however, that make Vermejo Park Ranch so uniquely memorable.  I met up with the San Francisco office boss of ProTravel who with her family had spent three days pursuing such skills as horse-riding, hiking and charcoal-making in one of the 14 adobe kilns in a once-thriving nearby village, long-since abandoned.  My limited time was cleverly organised. In the morning, I was hiking with Lee, a former construction-work tiler who has swapped that soul-destroying job for an outdoors life, which he loves, though he did confess that he and his girl-friend, who also works at Vermejo Park Lodge, have a plot of land and, once initiated, a two-year slot to build their own house, a couple of hours’ drive away.  At over 8,000 ft ASL it was literally freezing and I was jolly pleased to have fleece and thermal gloves. We hiked the Nature Walk, also a great favourite, apparently, of those opting for mountain biking – they have every size of bike here, including for kids.  My programme also listed an accommodation tour, to see some of the separate houses that offer four- or five bedrooms, ideal for a larger family or small group of friends. 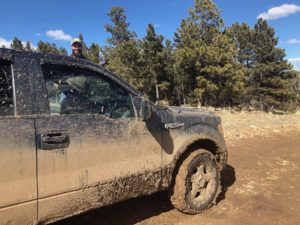 Lee and his transport

In the afternoon Lee took me for a 4×4 ride, about 100 miles in all. We climbed almost above the tree line – see the photo above, hich shows the devastation still apparent from a forest fire two decades ago. Many of the roads, for which read uneven sand-dirt tracks, mostly snow-covered – had become near impassable (Lee told me last time he was out he had become stuck for half an hour).  The Ford 150 was continually splattered, but fortunately we had the windows closed.  The tour finished at the charcoal-makers’ 14 adobes, brick honeypot-shaped structures about 30 ft high. Then it was back, to get ready for my next bison dinner, with Jake McBride.  This is one of the most extraordinary hotel GMs anywhere – Idaho farmer’s son, signed up to the US Navy at 17, preferred family life and after 14 years’ real-estating, until the 2008 financial crisis, he was manning a ColoradoRiver pleasure boat when a passenger, Christoph Henkel, said ‘you are so good you must come and work for me’ (at his just-opened luxury resort, Amangiri).  Later, Aman could not advance his professional career so he went to The Ranch at Rock Creek in Philipsburg MT, from which he was enticed to Vermejo.  Look, he says, I am in heaven here. AND SO WAS I, SEE SOME VIDEOS BELOW, FINISHING WITH A 360-DEGREE MOUNTAIN TOP PANORAMA