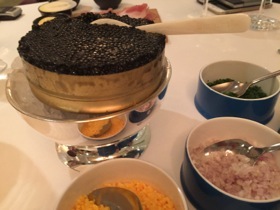 It was end of winter according to pagan law but with all that snow in Moscow it did not yet seem like spring. Anyway, there were big feasting celebrations at the city’s most-established Balchug Island luxury hotel, the Baltschug Kempinski, dating back to 1898 but rebuilt in 1992. The gal was lucky enough to be dining in the Grill with two friends, Lada Samodumskaya and Helen Gorbunova, and a lovely man – one wonders who? – sent over a little can of caviar to start the three-little-maids-are-we evening. Of course it was served properly, with blinis and all the trimmings, and a small shot glass of vodka. 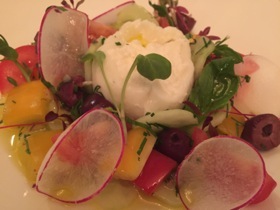 After that, a salad with local Italian-made burrata

After that simplicity was called for, and the salad was beautiful as well as healthy. Talking of wellness, Lada and Helen were talking about the FIFA World Cup in Russia, June 14th through to July 15th, 2018. The final will be in Moscow, at the Luzhniki Stadium, and no chance of getting a room here, at this friendly, family-style luxury hotel. All 230 rooms are already bought-out by FIFA, or its designated supplier (Sepp Blatter‘s nephew Philippe Blatter remains President and CEO of his sports facilitating company, just bought by that ambitious Chinese entrepreneur Wang Jianlin, who owns Dalian Wanda hotels plus a share of Madrid’s Atlético football team). 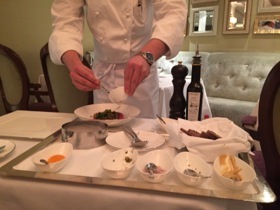 The Grill, as its name implies, offers masses of meat, all from New Zealand. I went for a steak tartare, which was hand-cut tenderloin, brought already cut but then mixed at table, and put in a metal form – see it in the photo – and it was magnificent, particularly with the little container of thin, salt-free fries that I ordered on the side. Boy, were I here next week I would be choosing from the alternative Lent Menu, which runs through to April 11th 2015. How about beetroot carpaccio with pine seeds and ruccola followed by buckwheat risotto with cèpes and spinach? No meat is allowed on a Lent Menu, apparently, and you are supposed only to eat fish twice in the whole six-week spell. 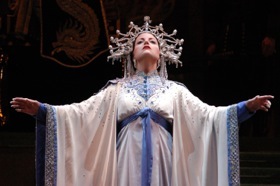 More food. If one must go out to dine – and actually sensible travellers would usually dine in as all top hotels have outstanding cuisine – there are two leading Moscow restaurants. One is Arkady Novikov’s Baccarat Crystal Room, designed by Philippe Stark in what used to be Ferrein’s Pharmacy, but that was closed, that night, for a private party. The other is Andry Dellos’ Turandot, named for the princess who inspired Puccini’s opera of that name. Turandot, the princess, was allegedly a cold fish who was wooed by Prince Calàf, who successfully solved three riddles that might otherwise have resulted in his death, but still she refused to marry him. The story can be traced back to the 12th century poet Nizami’s Haft-Peykar, and on to Carlo Gozzi’s Turandot and thus to Friedrich Schiller’s translation. Puccini, who died before the opera was finished (Franco Alfano completed it), used an Italian libretto by Giuseppe Adami and Reno Simoni (Turandot was first performed at La Scala April 26th, 1926, Toscanini conducting). All would be perfectly at home in Turandot the restaurant, part of the Dellos Group. 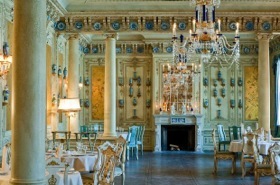 Not Versailles, but one of Turandot’s unique private dining rooms

Apparently $50 million was spent forming a two-floor square space into a two-floor, circular China-meets-Versailles dining area, the upper level an open-circle gallery giving better audio access to the live music below. My host immediately ordered the best-selling Pekin duck, expertly carved at table (I told him how Made In China, in Grand Hyatt Beijing, employs one specialist merely to insert toothpicks to hold birds’ necks at the right open angle before cooking). For some reason tonight was a special occasion, and tea was being offered, and skilfully poured, at all tables. Downstairs, tonight, were young Muscovites, in their thirties, and a few groups of Asian gourmets. Upstairs was completely taken up by a group of Russian business people, about 80 percent of them male. Andry Dellos and his designers have formed the resulting eight-in-total leftover bits into 20 funny-shaped rooms, ten on each floor, unique private dining rooms, each more than worthy of Versailles. 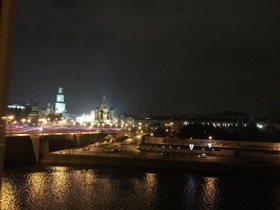 And the view from suite 410

After that it was night-gazing time back at Baltschug Kempinski. This luxury hotel has a unique spot for views across the Moskva River to the Kremlin, to the left, and Red Square straight ahead. At ‘two o’clock’ was once the monster Rossiya hotel, with thousands of rooms and hundreds of yards to walk to a restaurant, where you might wait hours to be served a meal. Now all is gone and it is said, officially, that a lovely park will sprout here. We will see. I, meanwhile, am going to bed, ready for tomorrow…