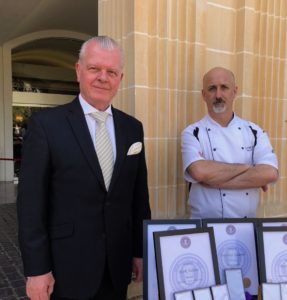 Few luxury hotels so beautifully exude half a century of tradition like Corinthia Palace, San Anton, inland but less than half an hour from Malta’s capital, Valletta, and other peripheral towns and villages on the island. From its gardens, look up at Villa Refalo, above, which Alfred Pisani saw in the mid-1960s. He expanded it to a 150-room hotel, and Corinthia Palace, named by his mother after the building’s columns, was opened June 11th, 1968, by HRH Prince Philip, Duke of Edinburgh. The gal arrived, incidentally, just as GM David Woodward and his culinary genius, Stefan Hogan, were photographing certificates, including two golds, that seven of the hotel’s culinary team had won at Hotelympia 2018 in London. 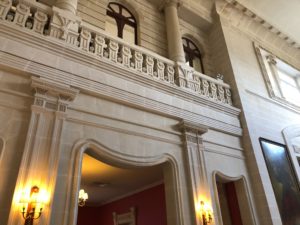 As part of the elevation of the entire Corinthia brand, the hotel is going through a lot of refurbishment, which is tricky when over 25% of guests are repeats, staying at least five nights, and of course many of them want the same room. They come for the quiet of an inland hotel, nearby surroundings that include fascinating residential streets and the presidential grounds, San Anton Gardens, immediately opposite the hotel. Regulars know that at Villa Corinthia restaurant they can look up at more of those Corinthian columns while they are served local tuna, oysters or lamb from Wales, salmon from Scotland and beef from Argentina, with such local wines as Delicata’s Medina Sauvignon Blanc or Syrah. And the servers, oh they are exemplary, traditional waiters filleting fish or flambéing tableside with calm pizzazz, total skill and undeniable passion. 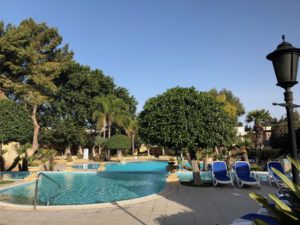 In summer the outside pool is a popular gathering place

Some regulars like to dine Asian, in Rickshaw, and, in summer, the poolside Summer Kitchen serves over 1,700 meals a week. I already mentioned San Anton is a residential area, and over 300 of those who live nearby belong to the hotel’s fitness club, which gives access to the indoor pool. The spa is currently being redone under the watchful eye of Alfred Pisani’s daughter, Rebecca Pisani, who promises a holistic experience – I hope she does not completely remove some of the current offerings, which include coconut or seasalt body scrubs, and such low-cal dishes on the room service menu as poached chicken with saffron and Spring vegetable succotash, for a mere 121 calories. 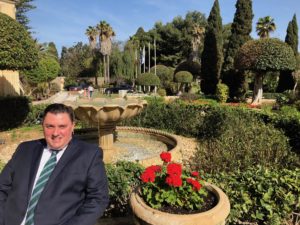 Stephan Killinger in the front garden

As well as its fine-dining servers, this luxury hotel honestly has absolutely lovely staff. From a young Sicilian man on front desk to immaculately-groomed local women in bright green waistcoats and sunflower-coloured ties serving in Orange Grove, nothing was too much trouble. Orange Grove, by the way, is a gem. It is the rear of the hotel’s lobby, and its buffet lunch, beloved of local businessmen, absolutely should not be missed. Before leaving, I sat in the garden – in the sun, of course – with Stephan Killinger, COO of the Corinthia Group. Six months ago, when joining the Pisanis, he had intended to live in London but, as he says, his wife loves Malta and so do his two children, pre-and-just-into teenage. Who could fail to feel better living in year-round sun, and in such luxury surroundings as this hotel, now 50 years young, can offer? NOW SEE FIRST A VIDEO OF ROOM 305 AND THEN AN EXPERIENCED WAITER FILLETING, TABLE-SIDE