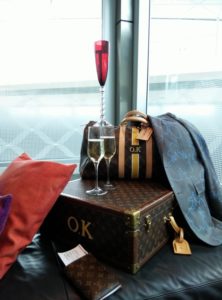 The last appearance of the red flute, RIP

The Sybaritic Single was sitting peacefully and enjoying Champagne in the lovely Centurion Lounge at the Dallas Fort Worth airport. This seemed like a good start since after a long week at a not-really-luxury hotel in Texas made him look forward to a long weekend in Miami.

This was also his first time to fly an eponimous Amercian carrier, something he was genuinely looking forward to. He knew he would be on one of the very few long-haul configured 777s serving the route – with a proper First Class cabin, of course.  As was his wont, he created La Pyramide, crowned by his crystal red Baccarat flûte.  It graced the airport lounge with its legendary elegance and scored more than a few photographs and Instagram posts by the wondering passengers around.

Little did the Sybaritic Single knew that it was the last public appearance of the doomed flûte. A couple of hours after, he almost missed his flight and had to hijack an ambulance cart – yet again – to chaffeur him straight to the closing gate. As the Sybaritic Single was about to disappear into the gate, an airline agent insisted on sending his wooden trunk to the aircraft’s baggage hold – for the first time in history. The iron lady found it a bit bigger and, at 24kg, a bit heavier than the normally-approved hand luggage.

As the upset Sybaritic Single settled in his seat, he was offered the airline’s Champagne, in a démodé plastic cup (this was the very moment when his own serving piece would be much more elegant). The seat itself, though still fully operational and only slightly filthy, could certainly rival the crystal red flûte in the number of cities it has been to. It was, despite the expectations, definitely an underwhelming experience.

Upon arrival at Miami International Airport, the Sybaritic Single waited anxiously at the baggage carrousel. Finally, he saw the wooden Louis Vuitton making its appearance, thankfully intact and only slightly shocked. As he checked into the next luxury hotel at Biscayne Bay, he opened the trunk – only to discover that the legendary Champagne flûte, which to date had survived every destination from Pyongyang to New York, was shuttered to pieces. Could that mark an end of the crystal red flûte travel era? You bet.