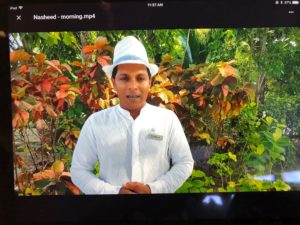 Welcome, in the Male seaplane lounge

St Regis Maldives Vommuli Island Resort, on Dhaalu Atoll, 50 minutes by seaplane from Male, shows how a luxury resort benefits from having owners with a fresh eye. The Chennai-based Appaswamy family already had midscale properties back in India but the Chairman’s son and mid-20s grandson wanted to do luxury. They asked Singapore’s WOW Design (Wong Chiuman and his wife Marina Warner) to come up with Italianate over-water villas based on manta fish, which could also be called, in plebeian style, dustpan-shapes.  Marry this with St Regis’ luxury thoughtfulness and, says the gal, you get unique moments.  Arrive at Male airport and you are driven across to the hotel’s seaplane lounge in a Bentley: in that lounge, there is a video loop showing a welcome from the butler who will actually later be in charge of you – and, for the record, Mohamed Nasheed was absolutely outstanding and, unlike so many of his ilk, he never intruded 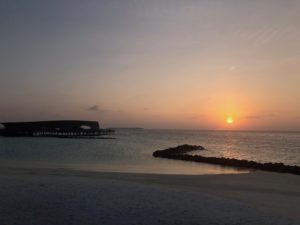 Looking at the overwater Whale Bar

There are 330 fulltime employees living in the middle of a ten-hectare island that, with tangent boardwalks and overwater villas, has 77 villas in total.  I loved villa #520, 280 sq m inside with a big deck and ten-metre pool – see a video, below. In St Regis style, toiletries were Remède: add a new-look easier Francis Francis espresso machine, 31 coat hangers – of which I used two – and hardbacks that included Brian Fagan’s Elixir; A Human History of Water, plus The Stylish Life – Yachting, and Louis Vuitton – Marc Jacobs.  All the overwater villas look similar: WOW’s concepts for public areas show bulau wood can be sculpted in different ways, as in curvilinear over-water spaces for Iridium Spa, and also a mammoth whale shape for the appropriately-named Whale Bar.  Here, six evenings a week a Ukrainian saxophonist plays (see her in the video, below). After sundown toasting mutual friends in Monkey 47 and tonic, Scottish GM Alexander Blair and I had simple, yummy, Aussie steaks and truffle fries at what, post sunset, becomes Whale Grill. 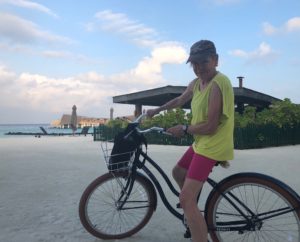 We dined beneath a ceiling with nine interlinked panels, the hotel’s version of the bar mural that is a feature of all St Regis properties. The chef, about to host, with the sommelier, a regular dinner in the Wine Cellar, came by to say hello – his team can do kosher, and sushi (to which I can attest) plus any Oriental and, of course, that universal favourite, Italian. Every Friday there is a Maldivian night, with food and music: the hotel arranges for guests who want to visit local, Maldivian-village islands, and perhaps see some of the pre-school local kids whom the hotel breakfasts before class, in a school the hotel re-built.  My own breakfast, by the way, was at the splendid buffet in the all-day-meets-Italian, Alba, see below.  I cycled there on my MG-label bike, which was my introduction to Priority Bicycles, the brilliant modern company launched by former software expert David Weiner – he has replaced chains, which rust, with carbon belts, which do not. 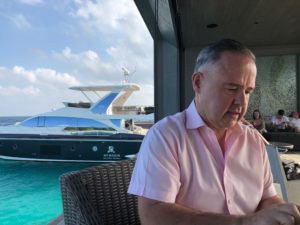 One outstanding feature here, by the way, is the open-circle stainless sculpture shown above – called Eye Sea U, it is created by Alex Davis specifically to balance the Warner-Wong wood simplicity. Yes, St Regis, as a brand, has style, and so do the owners.  Set among the luxury resort’s lush interior undergrowth is a brand new wood and glass pavilion, which will be an Ivar jewellery emporium, named by his jewellery designer daughter for Ravi Appaswarmy (she is mentored, apparently, by someone high-up at Van Cleef & Arpels, now part of the Richemont empire). A long-established pavilion, by the way, has an excellent 24/7 Technogym with, bliss oh bliss, both BBC and CNN: the busy daily schedule of free classes ranges from beach fitness to jumping and various yogas, and pay-for anti-gravity.  Oh dear, my seaplane was coming.  Of course Alec Blair was there to see me off, in between working his device. I arrived back at Male to find a message from Mohamed Nasheed thanking me for coming. AND NOW, FOR A PLETHORA OF IMAGES, SHARE A BUGGY RIDE, A TOUR OF VILLA 250, THE WHALE BAR AT SUNSET HOUR, AND THE FOLLOWING MORNING’S BREAKFAST