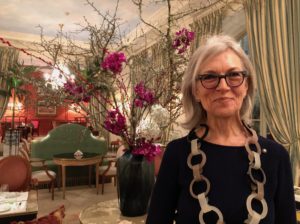 On a recent Saturday Le Bristol Paris, part of the Oetker Collection, organised one of its now-regular weekly movie afternoons. “We were showing Midnight in Paris, the 2011 film directed and written by Woody Allen”, Hotel Manager Leah Marshall told the gal. “The hotel was full, and just before the movie started everyone was networking over glasses of Alfred Gratien – the Champagne owned by the Oetker family – when by sheer coincidence Owen Wilson, star of the movie, walked in. Everyone thought I had arranged it specially”. Le Bristol is that kind of place, frequented by important people (Owen Wilson, who in Midnight in Paris plays screenwriter and aspiring novelist Gil Pender, vacationing in Paris with his fiancée, is just one of many big names who love the hotel).  He, like other guests that weekend, was not put off by the now-weekly Saturday ‘yellow vest’ disturbances that disrupt much of the French capital. 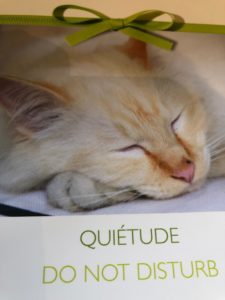 Le Bristol is a stone’s throw from the Presidential base, the Elysée Palace, and thus in a cordon of safety. You can walk up and down the famous rue du Faubourg Saint-Honoré shopping street: do as I did, entrust your faithful Rimowa luggage to one of the hotel’s concierges to have it undergo a complimentary check in the LVMH-owned Rimowa store, directly opposite (bellman Julien brought my case back to me 15 minutes later with four, all-new wheels).  If you turn right from the hotel into rue Matignon you are immediately in the gallerists’ centre of Paris, with Opera Gallery and dozens of other big-name show places. I believe that Le Bristol Paris is actuallty ideal for networking week-long.  Every Wednesday evening Leah Marshall hosts a cocktail party. As one of the world’s best social hostesses she takes pride in introducing couples from, say, Sydney to antiques lovers from, perhaps, Bangkok, many of whom later become firm friends. (She is one extraordinary hotelier – she started at 13, back on Canada’s Vancouver Island, when she was so indispensible to the GM of a small local hotel that she had a full-time job, 3pm to 11pm, all through high school, and after a career that included helping with the opening of Disneyland Paris she joined Le Bristol Paris in 2010.) She works closely with her Italian boss, the hotel’s MD, Luca Allegri. 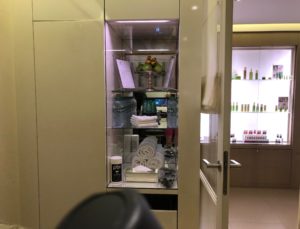 View from the gym to the spa

The hotel is German-owned, by the Oetker family, but it is, nonetheless, quintessentially Parisian.  In the 18th century it was built as a private mansion for Madame de Pompadour, the mistress of  Louis XV. In 1925 it was turned into a hotel by Hippolyte Jammet.  In 1963 the French-German accord was signed here by Chancellor Adenauer and President de Gaulle. In 1978 the eight-floor, 188-key hotel, around a so-French inner courtyard that holds a carefully manicured garden, was bought by Oetker. This time I stayed in 888, a top-floor suite – up 178 carpeted stairs or take an elaborate wrought-iron and glass elevator  – that has a 23-metre salon, with eight French windows, and enough closet space for the entire contents of Paris Fashion Week. I loved the so-comfortable bed, and waking up to a view of the Eiffel Tower, and the large, white-marbled shower room, and a fruit bowl that included exactly-perfect pears.  I had chocolates from the hotel’s own chocolate factory (it also grinds its own organic flour, and you can visit both manufacturing rooms). 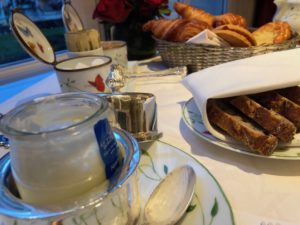 This year Le Bristol Paris is going all-out on experiences – and its outside concierge partner, Context Tours, offers 30 customized walking routes depending on your interests. Onsite, the hotel is celebrating its chef Eric Fréchon’s two decades here, and the tenth year of his third Michelin star (and he is still only 55): try the special €380 menu of best-selling dishes of the last 20 years, wines extra, and revel, also, in the beautiful Raynaud porcelain, and the Bordier butter. At least 80% of diners at the hotel are outsiders, Parisiens who appreciate the best. The more-casual restaurant, the one-star 114 Faubourg, is similarly 80% outsiders, here in many cases business people. One of this luxury hotel’s many magnets is its highly-popular bar, with working television screens set into mirrors behind the counter. In summer, teas or coffees outside in the garden are a draw. You find a really good Technogym, with choice of bottled waters and lots of fresh fruit, and views across to the Elysée Palace: book ahead, unusually, for Tara Harper treatments at the spa as Ms Harper has a surprisingly strong local following. They also offer amazing bespoke celebrations.  I was told of an Australian couple who celebrated a 50th birthday with a four-hour gastronomic dinner cruise on the nearby Seine, accompanied not only by chef Eric Fréchon but the hotel’s top sommelier and maître d’, and they liked it so much they repeated it four months later. AND NOW SEE ROOFTOP SUITE 888