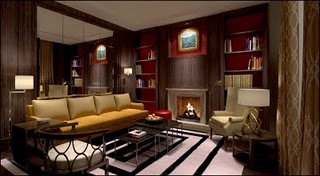 The Sir Winston Churchill Suite at Corinthia Hotel London looks pretty good for a gal in London (although I might opt for another of the 294-room hotel’s seven Signature Suites, the Hollywood-style Lady Hamilton, which looks out, somewhat suitably, at Nelson’s Column in Trafalgar Square). Anyway, the Sir Winston Church comes in at 142 sq m, and it is two levels, and has a large terrace with an outside fireplace there, too. This is obviously just the kind of pad for a seriously-successful business person of either sex in which to entertain when in London.

Actually I think even the basic lodging at this stupendous 294-room hotel is great. During soft-opening, I overnighted in 447, a ‘mere’ 46 sq m, superbly comfortable, with a walk-in closet and a bathroom with the electric towel rail that has long been a necessity in the best English homes. I luxuriated in the minibar’s Harrods snacks (Harrods has an in-hotel boutique, again a first – and Corinthia is ‘taking over’ the signature London store, now Qatari-owned, for three weeks in March 2012).

In room 447, an eight-inch silver Maserati with rubber wheels is a reminder that the first London to Brighton motor race started from this building, in 1896. The wedge-shaped Thames-set building, squeezed in between Whitehall Place SW1 and Northumberland Avenue WC2, opened as Hotel Métropôle in 1885: it was later occupied by the Ministry of Defence, and it opened as Corinthia Hotel London end of April, 2011.

Easiest way to get to the hotel is frankly by tube (underground): it is two minutes’ walk from Embankment station.

Enter from either Whitehall Place or Northumberland Avenue, and you are amazed at the circular central lobby, about 11 metres across. From its glass cupola roof hangs Chafik Gasmi’s glimmering ball-shaped fireburst, four metres in diameter and formed of 1,000 colorless and one red Baccarat crystals, all with interior LED lighting. David Collins designed the Bassoon Bar (lots of fun, and yet another working fire), and the fabulous Massimo Restaurant and Oyster Bar.

Someone has somehow persuaded Rome’s culinary heartthrob Massimo Riccioli to leave his La Rosetta back home and relocate here, and of course every Italian who knows his or her pasta-and-more migrated here, even before opening. This is down-to-earth, real Italian food, nothing pretentious, tall oyster platters and pasta with love, and the adjacent all-day Northall offers English and international food.

I love the way Corinthia Hotel London, under stylish GM Matthew Dixon, offers just the best. The four floor (sic) ESPA wellness stretches over 30,000 sq ft, with wavy walls of shiny, metal-dripped Lucite Kinon (or so it seems), and some white-gold gold leaf ceilings, and at least half a dozen working fires. There are 15 treatment rooms, a glass-walled, semi-sunken sauna that must be 20 by 15 feet, a vitality hydrotherapy pool of similar proportions, a massive steam area, and a 30-foot stainless lap pool. The tennis court-sized 24-hour gym has LifeFitness and those divinely-gruelling TriXter bikes that Sir Richard Branson loves. And, by the way, so do I.