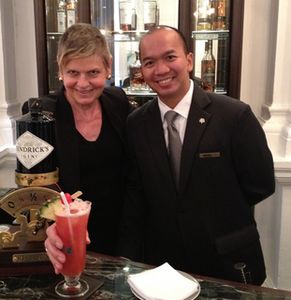 Obviously, in Singapore, the gal has to have a Singapore Sling, and where else but the luxury hotel where it was invented, sometime before 1915? A hundred years ago, a Hainanese bartender in the Long Bar, Ngiam Tong Boon, created the blend – just as today’s top Raffles bar-guy, mixologist Randolph Velasco, has just created Raffles World Collection of Cocktails, in honour of the entire Raffles family (his new Raffles China is Johnny Walker Black Label and a Chinese rice wine, Hua Diao Jiu). 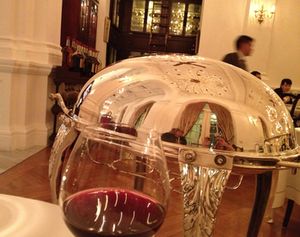 Silver-topped serving trolley in the Grill

The official International Bartenders Association recipe for a Singapore Sling is eights parts gin, four parts cherry brandy, two parts Grenadine and one part each Benedictine and Cointreau, plus 16 parts pineapple juice and six parts fresh lemon juice and a dash of Angostura bitters.  At Raffles Hotel Singapore, they serve over 2,000 of them a day – every firt-time tourist in town needs one. How nice that some traditions continue, and you see a lot of tradition here at Raffles.  Look at the silver-topped carving trolley in Raffles Grill (where I had the best Dover sole I ever remember). 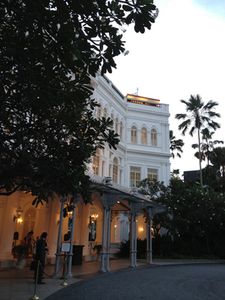 The much-photographed front of the hotel…

Raffles Hotel Singapore was built by two Armenian brothers, Martin and Tigran Sarkies, who were later joined by two more siblings, Arshak and Aviet Sarkies.  It opened in 1887, the year a statue was unveiled to Sir Stamford Raffles, who had established a British port on Singapore island in 1819.  The front of the building as it is today, on Beach Road, is probably little changed from what the Sarkies family created – did they too have basketball-tall Indian doormen in long white coats with masses of gold and scarlet braid, and imposing white turbans? 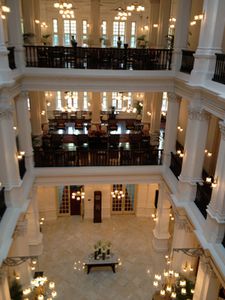 .. and looking down from the top floor

The original building has an open atrium soaring through three floors to a cathedral ceiling above. Most take the elevator but if you walk up the red-carpeted original teak staircase it is a total of 69 steps in all.  Rooms in this block are heritage suites – this where William and Kate stayed in September 2012, and where Queen Beatrix of the Netherlands stayed during what was to be her last state visit, January 2013 (she announced her abdication the following week). Did these royals, one wonders, recover with one of the spa’s no-nonsense, yes-relaxing treatments (the spa is on the top floor, next to the outdoor pool). 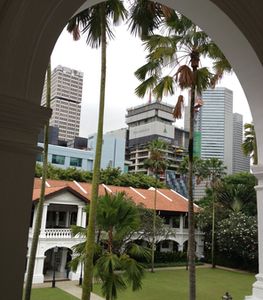 Looking out of the Cathay Suite’s terrace

Whichever suite or room you are staying in you, as a ‘resident’, are cocooned from all those Sling-sipping tourists. They have their areas, you have yours.  From 248, the Conrad Suite, for instance, I looked down on a grassy inner courtyard and never saw a single backpacker. Americans love the history everywhere.  Some of the room furniture is the ultimate heavy-Chinese that must have taken an entire tree, heavy as lead, to produce, say, a wood day bed, or even a desk. Original 1887-vintage windows are draped in floral curtains, and light switches are black push buttons in half-tennis-ball bronze structures. 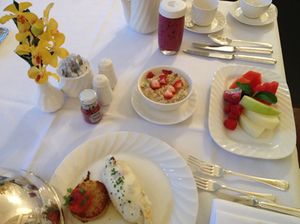 But, as several say, this luxury hotel is old but up to date.  WiFi amazingly works, despite the thick 19th century walls.  And look at the food offerings – I tried a health breakfast, sitting out on my terrace (I preferred that to Continental, American (egg choice), English (scrambled egg, baked beans, bacon, pork sausage and smoked haddock, all together), Dim sum and Congee breakfasts.  What did I get?  Health, according to Raffles, is a fruit plate, muesli with strawberries, an egg-white omelette , wholewheat toast and organic green tea.  It also, says Raffles, includes the most delicious berry and low-fat yoghurt smoothie imaginable..  Last drink before going through the Pearly Gates, Sling or smoothie? For me the latter. What a way to go.