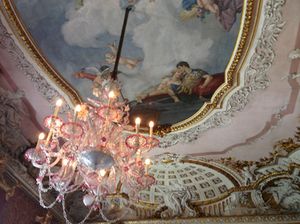 Aman Canal Grande Venice opened on June 1st, 2013, and it has been packed solid ever since – as it quite likely will be, year-round.  First this luxury hotel only has 24 rooms and, secondly, it is so unbelievably gorgeous it puts other traditional stately homes and palaces to shame.  All the gal can say is that lucky Venice has a treasure, and everyone in town will benefit.  One room after another has, well, amazing ceilings, rich fabrics and complete lack of designer clutter. This is one of the world’s most gorgeous, timeless palaces. 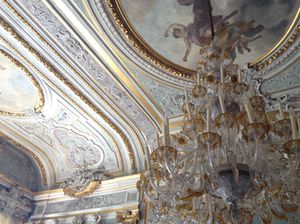 Look up at the ceilings and you see what I mean.  Let us get the story. You must arrive by boat, which comes straight up to its personal dock (if, like me, you try and walk the maze of narrow corridors from the Rialto bridge you will get lost, several times, but that is what Venice is like).  Outside, it looks rather like Bulgari Hotel Milan.  Inside… well.  You have 24-foot ceilings, liberally clad in incredibly valuable frescoes – three are by Tiepolo – and moulding and gold. Aman visionary Adrian Zecha was introduced to Count Gilberto Arrivabene Valenti Gonzaga, who lives on the top floor of the six-floor building with his wife and five children. The area below, formerly government offices, is now the hotel. 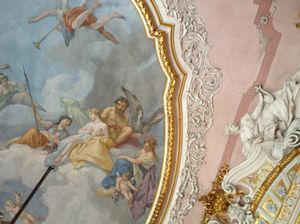 .. and frescoes, and moulding, and gold

It is Zecha’s genius to have brought in Jean-Michel Gathy as designer. The building dates back to 1550, and has passed from the Coccini to the Tiepolo to the Papadopoli to the Arrivabene family.  Some of the interiors were done in 1864 by Michelangelo Guggenheim (yes really).  Gathy has merely added subtle no-colours, mole and stone and so on, but sleek lines, beautiful Rubelli fabrics. Big bedrooms have ten-foot dividers from closet areas.  Bathrooms are big enough to host dinner parties for 12. 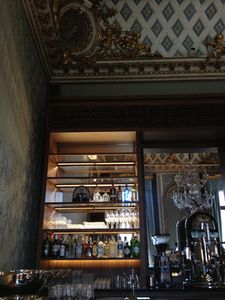 Even the bar is surrounded by lushness

One couple in the first two weeks, who had booked for eight nights, are already going to come back, for two weeks.  There is so much to do. Take a boat right on Grand Canal, outside.  Go walking by yourself and get lost.  Take one of the specialists’ tours, gardens with the head of Venice horticultural society, angel tours, a chocolate factory (eat as much as you like) out-of-hours, a 9pm ghost tour, Renaissance of modern art tours, all with top specialists.  Since the Venice Biennale is running through November 2013, the contemporary art tour sounds good. 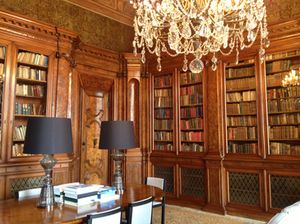 The library, with its historic book collection

It seems like an ideal hotel for post-toddler children, and teenagers.  At the end of all that walking and activity, the foot massage in the spa is apparently the best seller. Recover by relaxing in the library, which has a bespoke collection being put in by The Ultimate Library, run by Philip Blackwell, grandson of Oxford bibliophile legend Basil Blackwell.  The bar is another treasure: they have fitted the shelves of designer gins and vodkas, and a giant silver espresso maker, in among all that priceless history. There is Japanese food, and the main restaurant has a combined Italian and Thai menu. 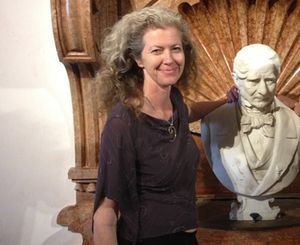 Olivia Richli, with a Papadopoli bust

Actually it is difficult to say what this luxury hotel has NOT got – swimming pool (who cares?)? Serious gym (you have to make do with two runners, two bikes)? Tennis and golf (forget’em)?  Oh yes, as well as Adrian Zecha and Jean Michel Gathy, there is one other person who makes this place unique.  Olivia Richli, the General Manager, is a highly versatile Brit who trained as a graphic designer, ran a boutique for a time, and she has a meticulous eye.  She, unlike me, even eats her spaghetti merely with a fork.