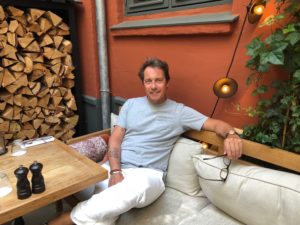 Alexander Kølpin, generally known as Sander, is an extraordinarily charismatic hotelier.  His Scandinavian blue eyes look straight at you, as if from a movie screen, which is not way out of possibility as for years he was Denmark’s most famous ballet star.  Now he is quickly becoming Copenhagen’s top celebrity luxury hotel owner.  His 54-room The Sanders opened January 2018 and, after a slow first quarter that was typical of the whole city, it has taken off.  When the gal called by it was full-house, for rooms, and the bar and outside seating on Tordenskjoldsgade were packed, too. 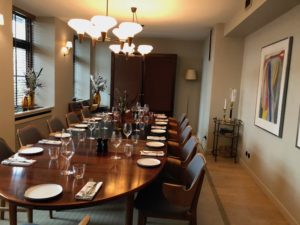 That evening, the hotel’s private dining room was taken by a New York couple – long-time friends of Sander from his ballet days – who were hosting an intimate gathering of friends (black tie, said the hostess, but she was joking).  The hotel has lots of different entertainment areas, from the Tordenskjoldsgade pavement, in summer only, right up to the gorgeous rooftop terrace.  Sander went on to become director of Copenhagen’s Royal Ballet and, as in any production, there are constant set-changes here.  I love the way that the area of public washrooms has wallpaper that is William Morris meets the Exotic East. 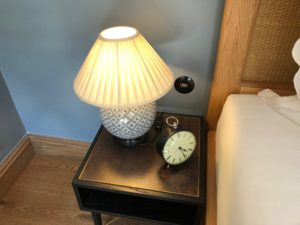 Perfect for waking up…

Thanks to Sander, and designers Pernille Lind and Richy Almond, now working as Lind+Almond, the rest of the hotel is Denmark meets international travel.  Wood floors and the main spiral staircase are Danish oak, so smooth it feels like silk. Upper corridors have rattan ceilings, which Sander says reminds him of Orient-Express trains in decades past. Bedrooms are soothing, as well as following the Sander maxim that luxury must include authenticity, with vibes (he owns the hotel, in partnership with his father, architect Jes Kølpin) 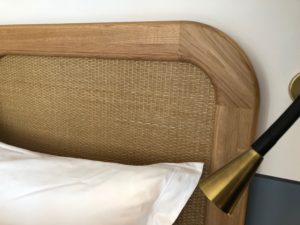 .. and for reading in bed

The pair have two other hotels, Helenekilde Badehotel and Tisvildeleje Strandhotel – and they might well do even more in future, outside Denmark.  But, says Sander, who seems always to be here, on the spot at The Sanders, this is their luxury presentation. He sees himself as art and creative director, but he is also intricately involved in details, and he does not forget the practicalities.  Even a top luxury hotel needs an alarm clock, especially when at least 25% of your guests are from the USA, with a minimum six hours’ time-zone difference.