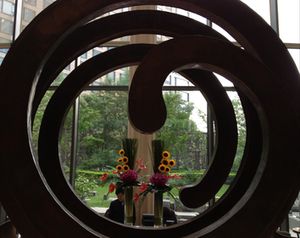 Look through a lobby sculpture…

So, when in Beijing, immerse yourself in past and present and future, and where else better to do this than in a luxury hotel that offers all three time-zones?  The Regent Beijing is run by one of the savviest hoteliers I know, the lovely George Benney.  Sitting with him makes the gal realise she is just an amateur.  He recounts how he helped open Hyatt’s first-ever hotel in China, how he was in Tehran at the time of the revolution, and so much more, and in between mouthfuls at Morton’s – more, below – he shows a video of his newest love, Joey his dog, frolicking in the waves back home in Perth.  But here he is in his other home, in Beijing, which he has made into a haven of activity, and happening. 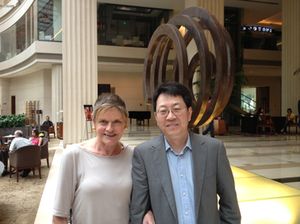 .. to see who is meeting whom (in this case George Cao)

There are top people in and out the whole time here.  I meet up with George Cao, the visionary who is masterminding  Dragon Trail and also tripshow.com, the main social media site for anyone who loves to travel.  George, his colleague Jens Thraenhart and I have devised Luxury Travel Coach, a weekly column on tripshow.com that advises China’s millionaires, billionaires and others worth knowing, where to go, outside China, for the best of the best.  Want finest wines and golf in Bordeaux, and perhaps an add-on of behind the scenes at Paris fashion houses? If you read Chinese and have a weibo account, no problem, find it on tripshow (if you cannot read Chinese, contact my good friend Stéphane Tillement in Bordeaux). 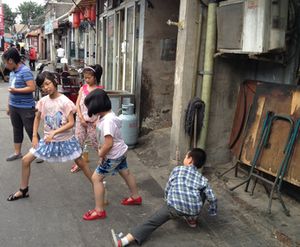 So George Cao graced The Regent Beijing, exactly at the same time as dozens of young Chinese teenagers wearing orange shirts hoping to see their heroes, the Dutch football team staying at the hotel immediately before their game with China. How come Chinese teenagers worship those orange men?  Social media, of course.  Meanwhile, lots of other young Chinese were themselves playing, not football but informal badminton and just hop-skip-and-jumping in the hutongs I visited with Simon Rom Gjerø, who runs Beijing Postcards.  He is Danish, has been in China for years (he started learning Mandarin from a schoolmate, at age 11).  He is married to a Chinese woman and he is besotted by local history. 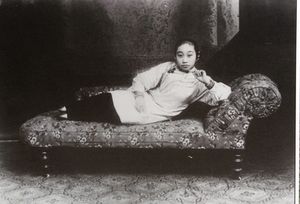 ..a languid courtesan of yesteryear

Simon, who has written a couple of books on China, works closely with Bespoke Beijing, a tour company which in turn works closely with The Regent Beijing.  Today, he took me on a tour of the former red light district of town in Bada Hutong, to the immediate south-west of the Forbidden City. Around the city, streets are at right angles. Down at its seven o’clock, so to speak, they are angled, all leading to the then-city centre so the merchants could get to business more quickly.  In the angled streets courtesans were ready to entertain the men, who outnumbered women in that area 350 to one.  As we walked Simon told me about Sal Jinhua, a courtesan, born in 1874, who married a diplomat who became China’s ambassador to Germany. Later episodes of her exciting life include being involved with General Alfred von Waldersee, sent to Beijing in 1900 to quell the Boxer Rebellion. There was much more too – her adventurous life was immortalised in plays, books, a 1936 drama by Xia Yan and a Xue Shaohuis poem. 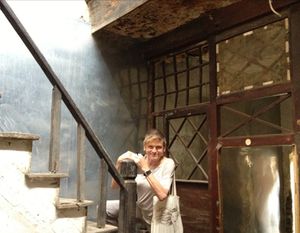 A courtesan’s life was not all about sex, claims Simon.  He took me to a level two brothel (they were classified, as hotels are today). The rule was five visits, and lots of spend, before sex. On 21 November 1949 the communists rounded up 1,200 prostitutes (of the alleged 35,000 in the business), sent them to ‘black door’, re-education, and married them off to soldiers in distant parts.  I could have spent hours learning from this guy but I needed to return to George (Benney, not Cao), to learn more about him.  His own autobiographical notes are sensational. Years ago a consignment of 80,000 ducklings, destined to be Pekin Ducks, were deemed sickly. The British ambassador, who had a pet duck called Pinky, got them diverted to safety by persuading the authorities to move the city boundary by a mile (not quite sure if His Excellency ended up with 80,000 more pet ducks or whether diners were able to eat their fill…) 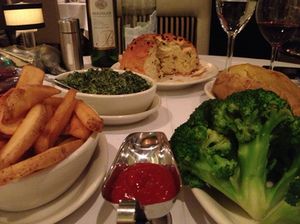 George Benney has brought in Morton’s of Chicago to run its usual steak theatre here so it was beef, not duck, for dinner.  It was excellent, although you have to get used to using massive steak knives to butter your bread or whatever – this is the only kind of knife available (travel tip, like me, carry a plastic knife at all times, you never know when you might need it).  Here you get a whole loaf of bread, already half-sliced, and portions are suitable for hungry people.  Before opening, Morton’s owners, Landry, sent over 12 trainers who, motivated by the excitement of coming to Beijing and this super-duper luxury hotel, tweeted like billy-oh.  This was all picked up by Beijing foodies so, without any publicity, when the restaurant opened it was already full…. in Beijing, even more than many other capital cities, social media is the future.