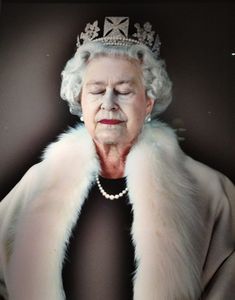 Her Majesty, above the Churchill’s reception desk

One wonders how Her Majesty, who reputedly always travels with her own tea kettle and lots of Malvern Water, would react to this photo of her?

It was in pride of place at a short-term exhibition at Hyatt Regency London – The Churchill and it seems to have stayed put.  It is right over front desk, so that when you come in to check in to the hotel, this is what you see. This has to be one of the ten best luxury hotel ‘backdrops’ in the world.  Others that immediately spring to mind, to the gal, are the hundreds of door keys at The Grove, north-west of Heathrow, and the real-time Chicago scenes at InterContinental Chicago.

Well this hotel, which has been around since 1970 (yes, darling, before you were born) is full of English tradition.  The bar is called, no prizes, The Churchill. 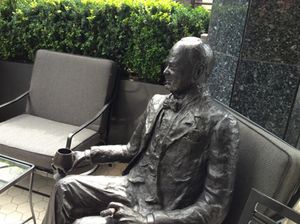 Lifesize statue of Churchill in the leafy outdoor terrace…

They have recently opened an outdoor terrace to the bar, on Seymour Street, which is especially great in summer but presumably for smokers it is great year round.  Sit in pouring English rain to put a bit of burning tobacco rolled in paper, costing nearly a pound, in your mouth and feel good.  Chacun à son gout.  Not me.  Anyway I do like the lifesize statue of Churchill, sitting there outside on the terrace.Of course since he died January 24th, 1965, he never sat here (we know where he sat, right? Far left of the then-Café Royal’s Grill on Regent Street).  But this hotel was named after him and very quickly became the talk of the Portman Square area. 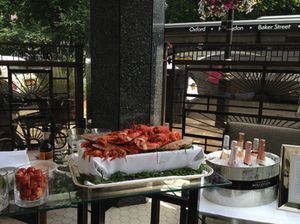 More on the terrace, food awaiting

It has been Hyatt since 2006 but is still always called, by taxi-drivers and others ‘The Churchill’.  I love its bar.  It has photos of him and books that he might have had at his private house in Kent, Chartwell, and knitted animal shapes that he used to put on his own at-home bookshelves to show where he had taken a book out. One wonders what his favourite cocktail was.  I do research.  Modern Drunkard magazine says he said: “I drink champagne at all meals, and buckets of claret and soda in between”. He apparently also noted that “Hot baths, cold champagne, new peas and old brandy” were the four essentials of life. During the ferocious struggle with the Nazis, a royal visitor reported that Winston was putting away enough champagne to “undermine the health of any ordinary man.” 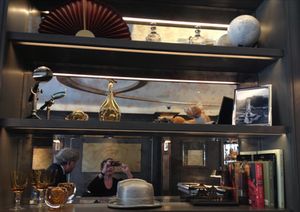 His favourite Champagne, by the way, was Pol Roger. During the war (WW2) his cats, apparently, were a great comfort. His best-known feline at that time was a big grey, Nelson. During one Chequers dinner, the US war correspondent Quentin Reynolds recorded Churchill as saying: “Nelson is the bravest cat I ever knew. I once saw him chase a huge dog out of the Admiralty. I decided to adopt him and name him after our great Admiral….” The first course at that dinner was smoked salmon and twice, when Mrs. Churchill was not looking, the Prime Minister sneaked pieces of salmon to Nelson.  Some say his favourite smoked salmon was from Loch Fyne. 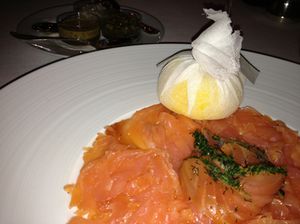 Smoked salmon and gravadlax at The Dorchester’s Grill

Some of the best smoked salmon in London these days is at The Dorchester Grill – it is from Loch Duart, which farms the whole of Eddrachillis Bay.  The company has been operating since 1999, and supplies restaurants of the calibre of this lovely place (designed by Thierry Despont in over-the-top scarlet plush, which works).  What makes the smoked salmon so admirable at this luxury hotel is that it is carved, table-side, together with gravadlax, and presented like a picture.    Simplicity, in so many cases, is what luxury is about today.