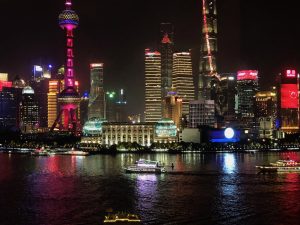 The gal’s visit to The Peninsula Shanghai was, unintentionally, remarkably well timed. A few days before, all the security belts had been wheeled into place for some high-powered visit or other and a few days later they would be erected again, this time for China’s International Import Exhibition CIIE, which sounded like the evolution of the business side of the Shanghai World Expo.  Fortunately, in that sandwich slot, Shanghai continued as usual. Sit on the Puxi side, where the hotel is, and at eight every evening Pudong puts on an impressive laser show – and vice versa, naturally. 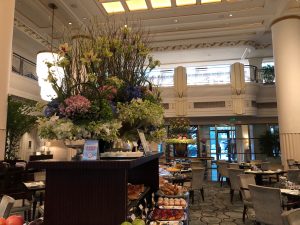 This is an absolutely timeless hotel. Look at the sheer beauty of lobby.  Walk along towards Nansuzhou and you pass such gleaming stores as Chaumet and, at the far end, a glass-fronted two-floor high Louis Vuitton. As always I was able to get an idea of what Shanghai fashionistas would be wearing in the next few months – for now, expect a rush of shoes that come with built-in socks, kind of natural sheepswool socks extending a good six inches above ankles. For the next few weeks, it is also well worth going up the 31 carpeted marble steps of the Grand Staircase to the hotel’s mezzanine. 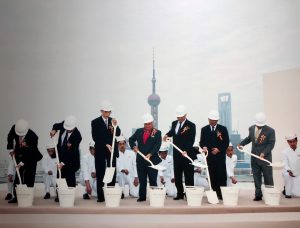 Topping off the hotel

As part of the property’s tenth anniversary, Cecilia Lui has put together a fascinating selection of photos showing the hotel’s history – see its topping off, on the left. 140 of the 780 staff have been here since the start and they are as fascinated as guests by having the hotel’s story portrayed like this. There is a reminder, for instance, that the hotel has hosted China’s debutante ball annually since 2012, and that its international squash tournament, held in a glass-walled court erected specially on the Presidential Suite’s terrace, is a must in the racket world. 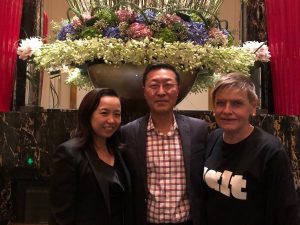 Cecilia Lui and Jisoo Chon hosted dinner in a PDR – private dining room – at Sir Elly’s (the menu was exquisite, see the cod and caviar dish, above, and we drank two New Zealand wines, Anthony Joseph Vidal Sauvignon Blanc 2018 Marlborough, and Impromptu Pinot Noir 2016 from Misha’s Vineyard, Central Otago). Jisoo Chon actually started with a food background.  It allows you to show your creativity, he says, but this must be tempered with meticulous efficiency. Somehow someone, be it either of my dinner companions or Ricky, who runs guest relations, seems to appear whenever hotel guests are going in or out, or need something. One essential element of luxury in hotel terms is what you want when you want it, or just before you know you want it.