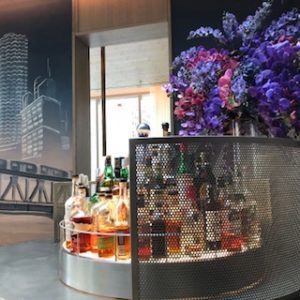 Sometimes the gal has all the luck.  Exactly five weeks ago the super-luxury The Peninsula Chicago opened its brand-new Z Bar. After ten years’ planning, the Yabu Pushelberg indoor-outdoor movie-set of a bar-lounge opened on the air-space of what had previously been a fifth floor terrace.  Named for the hotel’s much-loved, and universally admired, GM, Maria Razumich-Zec (shown above) and thanks to the brilliant design (see a video below), Z Bar was a hit from the start. Three opening parties saw the first appearance of sports stars and other influencers who are part of the will-be 30-strong Z Club, invitation only.  Social media is already making sure some nights attract over 800 hipsters, of all ages. 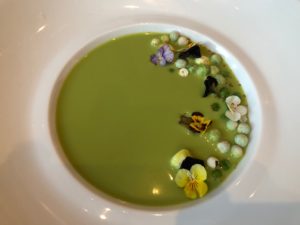 A debonair young Russia-born mixologist (sorry, ‘Director of Cocktails and Culture’) also helps.  He, Vlad Novikov, has designed a leather-bound travel journal of a cocktail menu, wittily annotated. Order a $100 Manhattan Royale, as one to five do each night, and your handmade Richard Brendon crystal tumbler holds ice laced with 24-carat gold, over which is poured 18 year-old Elijah Craig Bourbon. Some other, less exclusive, drinks are offered one-tot or as ‘funday’ sizing, 1.5-litres, meant for sharing. Since Z Bar’s terrace has working fire pits and a big glass canopy over, this place will keep its momentum, or increase it, year round. 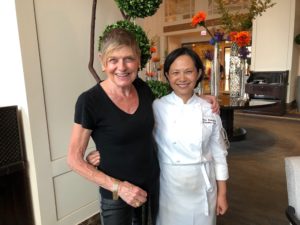 But back in the real world, or the hotel’s fourth floor lobby, things have evolved, too. Gold ceiling fixtures have given way to soft silver and crystal, and lollipop-ended trees, and big flower arrangements, thoughtfully named, make it even more agreeable a dining venue. Chef Toni Robertson, whom I have known since the last century, heads a team that produces such dishes as the green pea soup that looks almost too good to eat.  (Talking of food, I was really sorry not to return to the hotel’s sidewalk-set Pierrot Gourmet – it is walk-in only and during summer, especially, every table was packed every time I passed, admittedly walking by rather than walking in.) 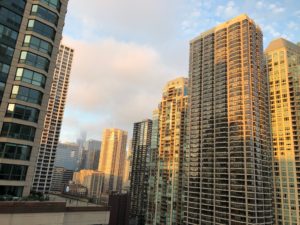 A luxury hotel must think of everything, as big as bars and dining alternatives and as small as adding handbag-sized hand sanitizers to bathroom fittings. And the team uses its brain, continually.  The Concierge team’s Keys to the City initiative offers such specials as VIP Suite interval access during Broadway-in-Chicago shows, and exclusive shopping consultancy and gifts at Saks Fifth Avenue.  Yes, these concierges can, it seems, do anything.  Yet again I had an Apple software hiccup and Gary put me through to Apple Support on the phone – unfortunately the third Apple supporter I was connected to cut me off (bad mark, Apple).  The hotel wins on everything, from the soft powder blue and cream corridors to the exquisite bedroom décor with one wall an embroidered panel of a bee and massive chrysanthemum, Chicago’s flower, and the 24/7 gym with Power Plate, two Pelletons and joggers’ televisions that work… and being able to get outside, on the 19th floor Olympic pool gym’s terrace, for some pre-breakfast breathing exercises. Now what WILL Maria Zec add next? NOW SEE VIDEOS OF Z BAR, AND SUITE 1209