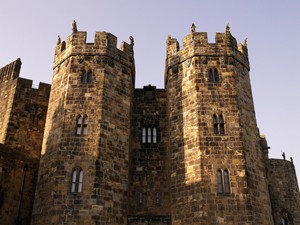 Parts of Alnwick Castle, Northumberland, England, date back over 1,000 years

Alnwick Castle, bought by Henry Lord Percy in 1309 and home of his descendants ever since, is famous worldwide for many things.

Alnwick Castle is also known globally for its sensational 21st century garden, devised by the current Duchess of Northumberland, Isobel Richard Percy.   She called on Belgian luxury garden designers Jacques and Peter Wirtz to convert what was a derelict 12-acre walled garden.  The result is said to be a balance of colour and  architectural green structure that gives lots to see outside summer months.

There is, for instance, the Grand Cascade, a series of 21 falls, with water ballet displays every 30

Part of the 21-level Grand Cascade, and its water ballet

minutes. The rose garden has thousands of blooms, including the Alnwick Rose, specially created by David Austin.  It is a rick pink rose with cup-shaped flower and its nose has a hint of raspberries (doesn’t it make it sound like a wine!).  The rose was launched at the Royal Horticultural Society’s annual Chelsea Flower Show in 2001.  Others rave about Alnwick’s fields of poppies.

My friends who visited a few days ago were also intrigued by taking a guided tour through the Poison Garden, which has a UK Home Office licence to grow illegal substances.  There are also beds of belladonna, mandrake and tobacco, and guides show you what to avoid when walking in the English countryside: school parties are also given Drug Action awareness courses here.

As the Duchess herself says: ‘There is a great poison garden in Padua, Italy, which was built by the Medici family. I visited it in 1996, at the time I was thinking about what I was going to do at Alnwick.

After visiting Padua I decided I wanted to create a poison garden here. I have a licence to grow marijuana, cocaine and magic mushrooms in the poison garden – for educational purposes’.

The Secret Garden I went round a couple of weeks ago at London Syon Park – a Waldorf Astoria Hotel, now seems very tame in comparison to Alnwick’s Poison Garden.