And the next WOW luxury hotel in Amsterdam will be, thanks to Piero Lissoni and lots of other people – the Conservatorium.  It is opening in stages, slow stages.

The gal went to lunch with her good friend Madelon Boom, who is going to be General Manager.  It was going to be hard-hat time, and wellie boots… but first we had to have lunch as everyone was hungry. There was Madelon, who had as always cycled in to work (really, these Dutch…).

There was Massimo Ianni, the deliciously-Italian CEO of the owning group The Set – yes, that is news, hot news, hear it from girlahead. Massimo conceptualised the Armani hotels and has now moved on (he is also converting the historic Café Royal in London to a hotel). 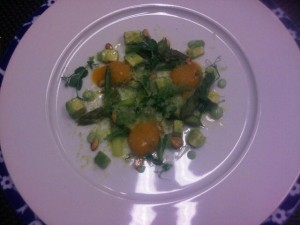 We sat in Madelon’s office, surrounded by trial toiletries and glasses and things, and the lovely chef, Schilo van Coevorden – Netherlands’ answer to a Daniel Boulud, Alain Ducasse or other NICE ‘celebrity chefs’ – cooked for us specially, and for me extra-specially.  I started with a salad with pumpkin mash, went on to truffle oil-filled risotto cakes, yum yum.

And then we went on a tour.  Piero Lissoni is known for many things, including the work he has done for Alessi, turning commodities into useful items of sheer beauty. 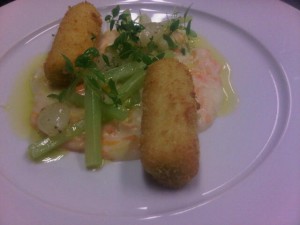 And his rissoles with truffle oil

Here he has taken a 1901 listed building, brick and stone, built originally as a bank (Rijkspostspaarbank) and later used as a music conservatory. The eight-floor building, like an open-L, still has its original shell, not allowed to be touched, but to balance the look-of-the-old with stunning 21st century imagination he has, within the arms of the L, so to speak, built a spiffing black glass tower, for meetings and the like.

The main building has classic staircases and ceilings high enough to allow over half of the 129 rooms to be duplexes. And wait till you see what he has done with those rooms, all in the same colour scheme.  Floors are unvarnished dark oak.  Walls are off-white or, shock-shock, glass (whole walls of glass back-painted with mushroom paint). 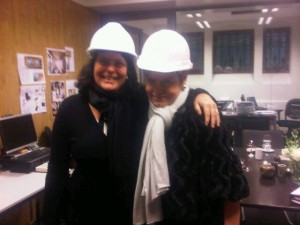 Many bathrooms are interior, without windows: all bathrooms are completely lined, including the inner facet of heavy-heavy doors, in solid marble, close yourself in and you feel as if you are in a catacomb.  Open the door to let yourself out, into your room, and you take a big deep breath at the beauty around you.

One clever thing.  Lissoni has invented a new television.  Think Bang&Olufsen, just the set, no stand.  This black thing stands direct on the floor.  It is without wires, and it swivels on one end, which is in effect a hinge as the necessary wires go from that end direct into the floor. 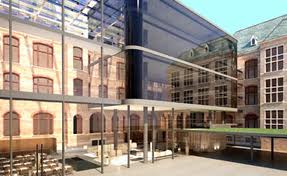 Other clever things here, in this unique hotel.  Tunes Restaurant and Bar by Schilo is casual luxury-dining. There is a black-glassed open kitchen.

One 30-foot-high wall of the main room is lined, ceiling-high, with black shelves, on some of which displays of all-white are artistically displayed. One area of the restaurant is more or less private, with eight-foot high dark grey curved banquettes forming an exclusive area, for up to 12, within. 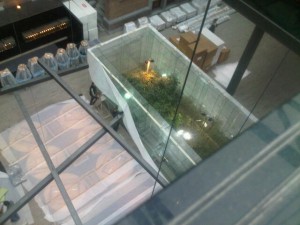 Then there is a two-floor bar with live dj, and there is a brasserie in a glass-covered courtyard, with a tree that grows up from the spa and gym below.

At least all this is in the future as the hotel is not open yet.  But, said, Madelon, she is already hosting luxury dinners. Cartier held a party, surrounded by workers’ gear. Macallan 60 launched its $20,000 (a bottle) limited edition there, this very Monday, November 21st.   Put the Conservatorium on your luxury travel agenda…