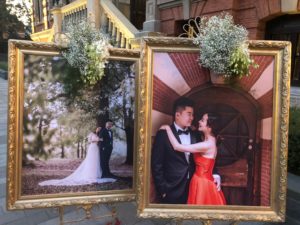 Happy couple photos outside the party

A-list weddings in Jakarta can go up to 5,000 guests. In China, by contrast, the government prefers weddings to be under the 360-guest mark. In Shanghai, the gal was lucky enough to be invited into surely one of the most elegant nuptials of the year. This was in the main ballroom of the Chinese Chamber of Commerce, a three-floor, 1913-vintage heritage building next to, and managed by, Bulgari Hotel Shanghai. As always in China, it seems, photos of the happy couple have been taken long before – on The Bund, and in nearby streets, you often find pairs posing, photographers in tow, long before the actual event. When you eventually arrive at the wedding, says the gal, the best of those photos will be on display. 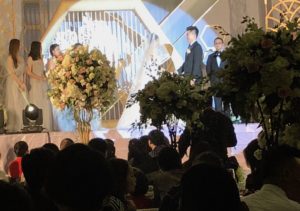 The party can be a Vegas-type performance

Bulgari Hotel Shanghai opened a couple of months ago but its GM, Vincent Billiard, was here over three years before.  He described how he watched the 47-floor rectangular building edge its way up, floor by floor. It has Bulgari retail on the ground floor, and the 120-room hotel is on floors 40 up, with gigantic Bulgari signage on two of its rooftop facets – there are big photos of Monica Vitti in the lobby lounge, and other jewellery-wearers in continuous loops of old movies running in the hotel elevators. All this Bulgari awareness certainly attracts staff (Elva, the chic director of the extremely stylish La Mer spa, admits she is besotted by the brand). It also attracts custom, both for bedrooms and other business. 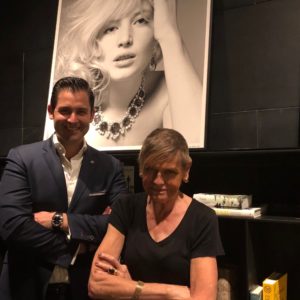 We walked over to the Chamber of Commerce, seemingly free of the actual word Bulgari.  This one wedding had reached the stage of a Vegas-type stage show – see the video, below. We looked in on some of the building’s private dining rooms. I was also thrilled to see Bao Li Xuan restaurant, which has a paper menu, hand-stitched spine, read from back to front, downwards from the top, Chinese characters only.  But we were dining back in the main building, so we went past numerous inner-lit vitrines of Bulgari jewels and took an elevator, with more movies showing stars wearing Bulgari, up to the 47th floor. There, we went through to the bar, dominated by the brand-signature central bar counter, a horseshoe shape of pure bronze, three tons in all – it had to be hoisted up by heavy-duty crane. Beyond the bar is Il Ristorante Niko Romito, great food and wine, and cutlery is Bulgari, designed by Silvio Ursini. 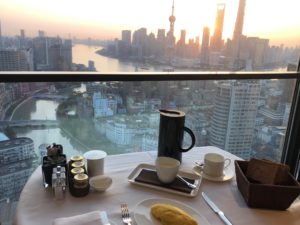 It was Ursini who designed the hotel’s bedside lights – beds, by the way, have grey cashmere Bulgari throws (Beijing’s are rust).   I was in Bund Suite #4303 and as the video, below, shows, the back third of the large main room was artistically caged off, with glass-held gold net, to form a semi-private study. The closet is a walk-through, from the main room to the bedroom and bathroom.  Once again, as in Beijing, I was able to start my day in the outstanding Workshop gym, 24/7 with well-thought out Technogym pieces. Through shortage of time, here I decided to have room service breakfast, which is also available any hour (yes, 24/7): it arrived on the dot, crispest linens, and, what luxury, plenty of excellent coffee, in a black Stelton pot designed by Erik Magnessen – though the versatile Mr Ursini had designed the Bulgari cutlery.  As I left I made a note, next visit, to borrow one of the hotel’s Bulgari-labelled black bicycles,titanium aluminium and carbon monocoque. Momo Design, stunning to look at and, I am sure, just right for a spin around town. AND NOW SEE A WEDDING PERFORMANCE, AND THEN SUITE 4303