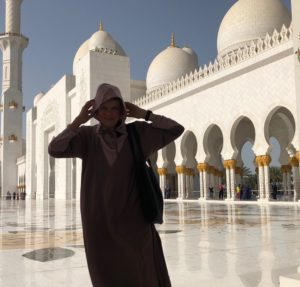 In Abu Dhabi, the gal would sum up Ritz-Carlton Grand Canal as the luxury hotel that has something for everyone – to the maximum.  It is enormous, for a start, but it is still dwarfed by the glorious Sheikh Zayed Grand Mosque, ten minutes’ drive away.  Every visitor to this Emirate should head to the mosque, which far far exceeds expectations.  The experience of visiting is on a par with Agra’s Taj Mahal and Amritsar’s Golden Temple, but here entry is free and the process is so well-organised there is no waiting. After initial security women are diverted to one side and helped into all-encompassing robes, unfortunately synthetic fibres so even on a comparatively cool day you feel you might melt.  Memo to all: try to avoid visiting in high summer. 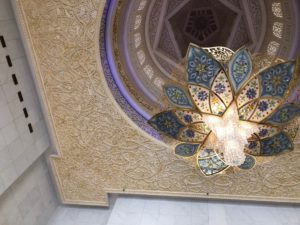 Just one of many stupendous mosque chandeliers

Men are allowed in as-is, but all must take off shoes (second memo, wear or take a pair of socks).  You can, following cordoned walkways, wander as you want around the 30-acre building, which has 82 domes, its height rising to the 351-ft lead minaret shown above.  Yes, you pass over the world’s largest carpet, a total of 60,570 sq ft which took over 1,200 Iranian knotters two years to complete: since it weighs 35 tons how did they not only transport it but lay it in place? You look up at Faustig chandeliers, one 33 feet in diameter and 49 feet high.  I loved the delicate inlaid floral patterns, precious stones in marble on some columns. I was impressed that although anyone is free to take photos, anywhere, any time, the thousands of visitors, including many Asians, were respectfully well behaved. 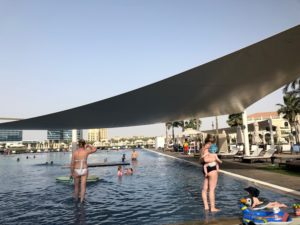 Actually, at the hotel anything goes

And then, back at the hotel, I was similarly aware that this 532-room, crescent-shaped structure caters to the world. Local businessmen in pristine white dishdashes worked laptops or conferred in the acres of polished-marble lobby (see a video below) while outside European mums paddled with babies in a shallow part of the mega-pool. Come evening, there is an entire lower-level boulevard of dining options, and tonight’s specials included seafood night at Mjana, and dimsum at Li Jiangs.  We went, however, for a world of beef, at Forge, where our server was Ukrainian. French-Lebanese foodie Michel Nader chose Canadian grass-fed beef.  After my Italian burratina I went for Australian wagyu – both outstanding – with French asparagus. The Laguiole knife (choose your handle) and Peugeot mills were also from Macron-land, the Matua 2016 Pinot Noir came from the nation with a pregnant Premier. 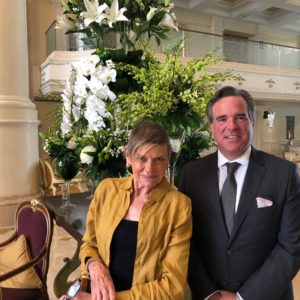 Nick Heath, GM of this luxury hotel, has only just arrived from Doha, where he ran that venerable, now renovated, pyramid hotel, Sheraton Doha, and today he was leading a management outing to the desert. No, I did not go with him.  I revelled in staying here, in a club suite with sizeable balconies, lunching, and breakfasting, most splendidly in the enormous conservatory-like Club Lounge (anyone, business or leisure-only, could choose this hotel for a myriad of reasons, including the generous Club hospitality).  I would also stay here for another steak, for the big gym, not only Technogym but working sudoku, and 24/7.  Others, of course, might stay here for the outside pools, or the 22-carat-topped cappuccinos in Alba, but then this is luxury for the world. AND NOW FOR VIDEOS, IN ORDER OUTSIDE AND INSIDE THE MOSQUE, THEN THE HOTEL’S LOBBY, ITS CLUB LOUNGE, AND MY SUITE