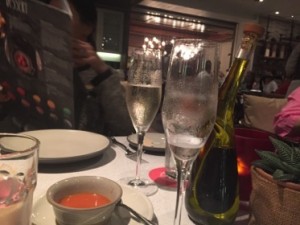 Luxury hotels need continual reinvention, like people who can become bored unless they change direction from time to time, or add a new depth to their experience. Shangri-La Singapore first opened April 1971, and it added this and it added that so that it is now really three symbiotic products, bounded by 15 acres of absolutely stunning gardens, by far the best in town. As part of the ongoing upgrading process, by the way, there will soon be an orchid house in those gardens. Why? Well, apparently Robert Kuok‘s daughter is a keen gardener so local architect Franklin Po, of Tierra Design (who did the amazing landscaping at PARKROYAL on Pickering) has successfully submitted a proposal to design a once-off sculpture that will, says the gal, be big enough to host 600 orchids. 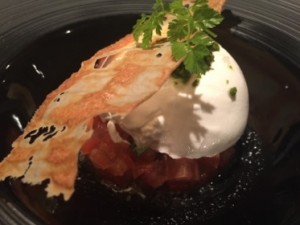 We dined in Waterfall Café, a former health restaurant in the garden that was transformed, literally overnight, into Italian. Uniforms and table settings as well as menus suddenly changed. Never again, says management, it was far more stressful than closing to re-imagine the culture. The worst part, says one server, was suddenly having to pronounce menu items, hitherto in English, in plausible Italian (at which she rolled her eyes and waved her arms in the air as if she was on Via Veneto). Of course we started with Prosecco, from Ruggeri Argeo, and went on to an Abruzzo, Farnese Edizione Cinque Autoctoni Fantini 2012, and yes, we did eat, as well. My caprese, sorry Burrata Pugliese con pomodori marinati, was superb. 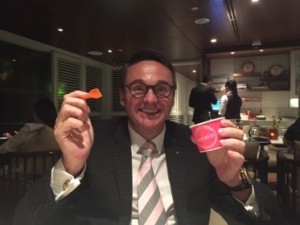 Reto Klauser, who orchestrated this evolution from just-health to what is labelled a ‘love story from Southern Italy’, even brought in a new Neapolitan chef, Marco De Vincentis, who is as Italian as one can imagine – sensibly, his Tagliata di Manzo rucola e crana is available as three cuts, and three price levels, all Australian, Black Angus 120-days grain-fed, Tenderloin Hunter Valley grain-fed or Wagyu rib eye 5+. Mr Klauser loved his icecream. I do wish that Shangri-La would announce something somewhere in Italy as then they could expand this ‘love story from Southern Italy’ theme. 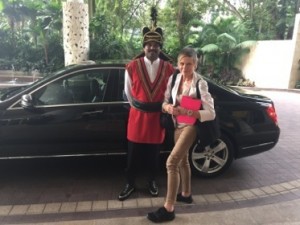 As I have commented before, Shangri-La has many great distinguishing points, one being the superb Horizon Clubs. Here, stay in the luxury hotel’s 131-room Valley Wing and instead of a standard club lounge the lobby becomes an all-inclusive meeting point, as does the outside terrace. Breakfast is served, with formal butlers in golden waistcoats, in a magnificent circular room, ground-floor and looking out into the gardens. It is quite awe-inspiring to help yourself to fruit set just in front of a ceiling-high carved-wood panel showing ancient Chinese potentates getting in and out of boats – and equally impressive being seen off by a doorman in a uniform that is delightfully indescribable.