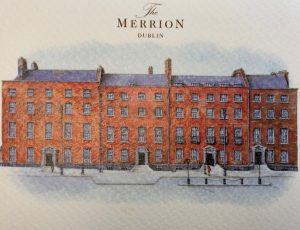 Where else can you take a magnificent art tour along with a first-class afternoon tea, or any time that suits you? This is what The Merrion, Dublin, often said to be the Irish capital’s premier luxury hotel, offers – and the art tour, which takes about 35 minutes, is free.  Pick up an easy-work audio set and accompanying booklet from the concierge, and after an introduction from the hotel’s Chairman, business tycoon and art collector Lochlann Quinn, off you go. The gal was fascinated by the lobby-set red-turbanned self-portrait by Saurin Elizabeth Leech 1879-1951 – above – who was married for two years to William John Leech, 1881-1968, whose Aloes hangs in the hotel’s Upper Drawing Room. One of the newest additions, outside The Garden Room all-day restaurant, is The Battle of The Boyne 1690, by Jan Van Huchtenburg 1647-1733, one of two of his paintings of this battle (the other hangs in The Rijksmuseum in Amsterdam).

This 143-room hotel, part of Leading, could well be described as an art gallery with 159 stunning artworks that also happens to have bedrooms. I was in suite 292, recently added to the inventory. The salon looks across Upper Merrion Street to government buildings, the bedroom’s view is over Fitzwilliam Lane.  Alice Roden’s bedroom interiors are reminders that the hotel is a conversion of 18th century townhouses, one of which was birthplace of the Duke of Wellington. The suite is classic, with moulded ceilings, and floral prints showing more than a streak of chinoiserie. You have Asprey toiletries, electric towel rails, simple Nespresso with bespoke William Edwards cups, and a range of Irish arts and history hardback.  My glass-bottled water was Oscar Wilde, from Tipperary. It is described as ‘exquisite’ by Wilde’s grandson, Merlin Holland. Yes, Wilde had two sons – one Merlin’s father – by his wife Constance Lloyd. Both were named Holland. Why? In fact Wilde came from Dutch heritage, de Wilder. After the Wilde scandal both his sons changed their name, to Holland. 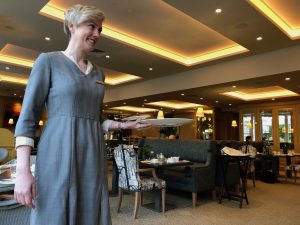 Kate, in her designer uniform, in The Garden Room

The Merrion has so many advantages. It is five minutes’ walk to St Stephen’s Green and double that to the city’s retail hub, Grafton Street (add two more minutes to Wicklow Street pubs). Actually there is a great pub right in the hotel, the basement Cellar Bar, with original barrel-vaulted brick ceilings, pub-grub food and two own-label craft beers, the Delaney, and, for the building’s original contractor, the Monk. We actually dined, however, in the Garden Room, an Alice Roden masterpiece that flows, through an all-wall sliding window, out to the central garden when the weather allows.

The Garden Room is light, bright and furnished with palest pine-coloured wicker, chairs and glass-topped tables. The kitchen sent out pairs of nutty Wexford scallops as amuse, and I went on to Ardsallagh goats cheese salad with pancetta, toasted pine nuts, beetroot, and rocket, followed by grilled whole black sole with baby brown shrimp, samphire and lemon butter. Now Ireland does craft beer, and whiskey, sic – I had a carafe of Redbreast 12 year old single pot-still Irish Whiskey, with tasting notes by Jim Murray, in my suite.  Ireland does not, however, produce wine, so we had to make do with Givry 1er Cru le Grande Berge 2017 Dme Mouton.

Apart from the wine, this is an Irish experience, through and through. The Garden Room servers are in soft greys to suggest the Wicklow hills, specially designed by Consolata Boyle, who got Oscar nominations for her costumes for the movies The Queen, 2007, and Florence Foster Jenkins, 2016. I was able to admire some of the frock styles at breakfast, over great coffee and sourdough, and local G’s preserves. The buffet has two Irish yoghurts – the Killowen Farm macrobiotic is 10/10. The listed Irish breakfast offers eggs, Tommy Doherty black pudding, bacon, tomatoes, and potato soda bread. 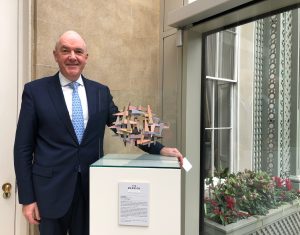 Imagine breakfasting looking out at the hotel’s inner garden, magnificently manicured, European-style with exact box hedging, occasional sculptures and firepits. On the conservatory-like corridor going through said garden, from The Garden Room back to reception you pass a kaleidoscope-like collage on a tall stand. This is the Merrion Plinth, erected in 2019 to celebrate the hotel’s 21st anniversary. First of what will be a changing display of competition pieces is Chaos Bewitched, by Orla Whelan, founder of artists’ collective AtHomeStudios.

Since my last visit a highly successful spa has been added, sculpted out of what was a lowest-level thematic-dungeon restaurant. Now the sparkling five-room facility, with ESPA and Biologique Récherché, the first in the country, does extremely well, with 85% local clientele and remarkably healthy retail sales. I only had time for the gym – 24/7, with LifeFitness: the 12m indoor pool, next to it, has a trompe l’oeil country house scene on one end wall.

The time came to head off to the countryside.  As I left, concierge Colin handed me my pre-ordered baguette, wholemeal with caprese. NOW SEE SUITE 292