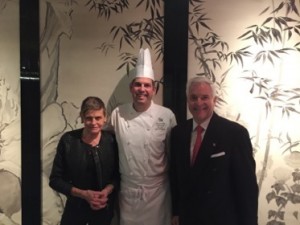 Michael Hoffmann is a happy man – he is back in business, which in his case means running a luxury hotel (Waldorf Astoria New York, and you cannot get much better than that, says the gal). It what he always wanted to do. He trained as a hotelier, worked his way up via Peninsulas in Hong Kong and Quail Valley, headed The Boulders in Carefree AZ for some years and then had a satisfactory diversion looking after luxury brands for Hilton. But a couple of weeks ago he was asked to take over the Waldorf, and he has not stopped smiling since. Where else has such history? Where else has such a catalogue of tip-top guests? And look at the  events … The first-ever Hollywood movie shot on outside location was filmed here, the 1945 film, ‘Weekend at The Waldorf‘, starring Ginger Rogers, Lana Turner and Van Johnson. 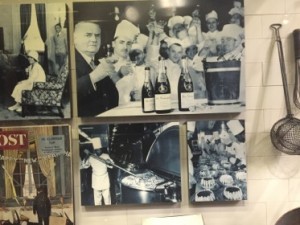 The day I was there, the 1,315-room hotel had no fewer than 500 people checking out, and another 500 checking in. That is a thousand movements at front desk, and those waiting in line might hear the iconic clock behind them, made for Chicago’s World Fair in 1893, chiming discreetly every 15 minutes. I find this size completely daunting. There are over 1,500 employees, 20 of whom have been here for over 50 years. Crumbs. But at lunch in Peacock Alley a young waiter glides up as if he has been here only a few months and is full of enthusiasm. I remember that Peacock Alley is named for the original walkway between two adjacent hotels, the Waldorf and the Astoria, and the fashionistas who paraded along it. 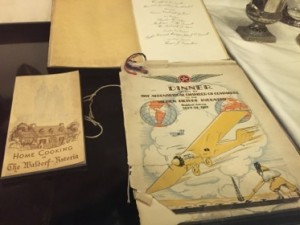 It was this hotel that invented eggs Benedict, and a Waldorf salad, and today there are lots of salads, including kale with added protein. I bet something so simple, and so healthy, never appeared in one of the hotel cookbooks in the fascinating vitrines, dotted around public areas, which provide unique social history of the hotel and what went on there. Right now is the annual season of charity dinners, when the ‘poor’ invitees – I use the word without any monetary connotation – are asked night after night, to attend something or other in the knowledge that it is 100 percent certain they will be asked to bid for one of the auction prizes, say an art work they do not want or a vacation trip they have not got time to take. ‘Donor fatigue’ is a new medical condition I had not heard before. The same people are targeted for everything. 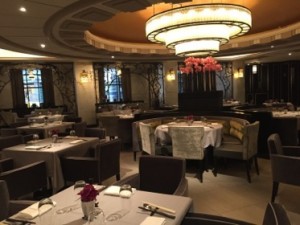 A view of La Chine

The hotel is also targeting its regular diners and other to try its just-opened La Chine. Yes, Oscar’s, where legendary Maitre d’ Oscar Tschirky created not only the Waldorf salad but also veal Oscar, was replaced, in a couple of weeks, by a sophisticated and calming Chinese restaurant, designed by Studio Gaia. Jereme Leung, who also works with Conrad Maldives Rangali Island, is the consultant here, and he has put his colleague Kong Khai Meng to head the kitchen.  I admire the absolutely gorgeous PDR (private dining room), and I am told that some of the herbs used in the pan-China menu are flown in specially from China. Ah, that is what a luxury hotel, as opposed to any old establishment, does.