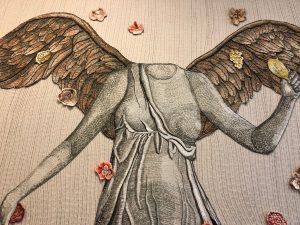 When a luxury hotel’s room supplies include a paperback that you really want to read, with a note that says do please take it, you are much more likely to remember the place.  Since the gal stays in nearly 300 hotels a year, Waldorf Astoria Chicago does stand out, and not only for that book episode (for the record, the small carry-on Rimowa that is her total travelling closet for two weeks was so full it was impossible to take the book but the bookmark went). Actually, there are so many memories of this hotel. In some ways it was coming home, five years after an earlier visit. The embroidered angel wall decoration is headless as ever. 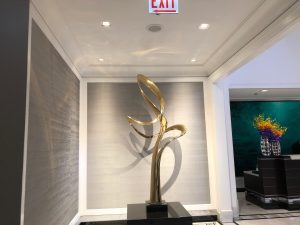 But a lot else has changed. As in so many thoughtful hotels, the lobby has been revitalised. The hotel has ditched a local culinary consultant in favour of the marvellous Michael Mina, whom everyone loves and who is so versatile when it comes to food styles.  Here the rear of the lobby is a Petite Margeaux coffee shop – see above – with seating inside and, when the weather allows, outside in the courtyard, under bright purple umbrellas.  I sat over a cup of coffee in Petite Margeaux, waiting for my room to be ready, and it was fascinating to watch the number of locals, obviously regulars, coming in for their morning caffeine. 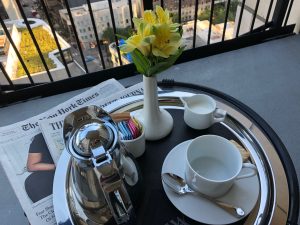 There were obviously financial-type meetings going on when I was there but, like a chameleon, the 188-room hotel has something to suit everyone. Those in a hurry can have quick bento-box lunches in the main Margeaux bistro (70% choose such a box). Fitness enthusiasts have, from 5.30 a.m., a good Matrix gym, and an indoor pool. Shopaholics only have to look across the hotel’s courtyard to see, from left to right, IWC and Pannerai and A Lange & Söhne stores: a few yards away, too, is Michigan Avenue, with every top boutique imaginable, including a massive jewel box of a Burberry store and a theatre-in-the-round that is in fact an Apple Store. 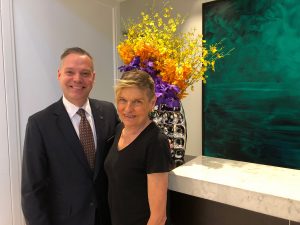 Todd Temperly, who runs this very efficient hotel, has instituted many memorable features.  I ordered a New York Times from concierge Judson Corrie.  Would I like tea or coffee with it?  The coffee arrived, with the newspaper, at exactly the requested moment. I then had breakfast-proper with Todd Temperly, who seems to commute, for nine minutes, between this and the other luxury hotel he heads, Conrad Chicago. Fortunately, perhaps, both are owned by the same person, Laurence Geller, a one-time chef who became a lifetime hotelier and thus understands that hospitality bricks and mortar do not work from the customer viewpoint unless they are married to passion. Here, at Waldorf Astoria, I had coffee on arrival, coffee at wake-up and coffee at breakfast-proper, and in each case the server asked really genuinely if they could do anything more for me. WANT TO SEE SUITE 2100?