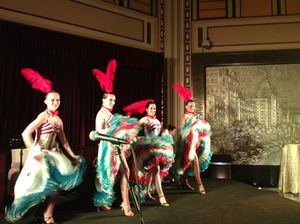 Fairmont Peace Hotel, on The Bund, threw one of Shanghai’s most spectacular parties in June 2013.  Host was George Wee, newly-arrived boss of this luxury hotel, built in 1926 at the cost of $5 million for Mr and Mrs Sassoon.  It soon became renowned for its parties, with Charlie Chaplin, Doris Duke and Paulette Goddard among the guests.  Perhaps they too watched can-can, just like here – the dancers are seen in front of one of four massive metal-relief panels in the lobby. George Wee, helped by party organizer Stéphane de Montgros, was hosting over a thousand at the official party of International Luxury Travel Market ILTM Asia. The gal was amazed to hear that ten glasses, of whatever, were allowed per guest… 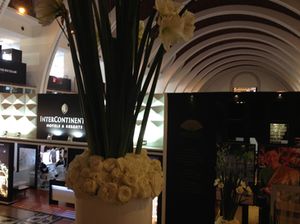 Looking down into the exhibition hall

And yet, day-long for three days, the ILTM delegates had to work, and hard.  The 1950s-conference centre, built in true Soviet style but now even more magnificently decorated than ever, hosted about 500 luxury exhibitors (where was Oberoi?) and the same number of tip-top travel agents, from all over. There were, for instance, 27 from eastern Europe, right through to Siberia, with one from Bishkek and several from Ukraine.  Want tip-top spenders, you need to be at ILTMs to meet their travel advisors.  And you, if you have the right product to show, need to be there yourself, or send top people – having a stall staffed by a sleepy teenager does not impress. 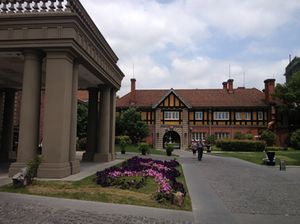 Home of H.E. Maurice, now part of the newest Intercon

Seeing the InterContinental stand at ILTM reminds me of two splendid InterCons I have seen recently, Marseille and here in Shanghai.  InterContinental Shanghai Ruijin Hotel is still in opening stages but when it is finally ready it will be one of the best conference and meetings hotels in the world.   With 100 acres right in the French Concession area of town, it includes a fabulous garden going back to 1920. One of the 11 buildings (shown) is the house of Irish gambler H.E. Maurice, who owned the racetrack that is now Peoples Square. Another original house was home to his son, Benjamin Maurice, who owned the city’s dog track and the North China Daily News paper: that building will become a special-security 28-bedroom ‘hotel’, with one suite of 9,000 sq ft. 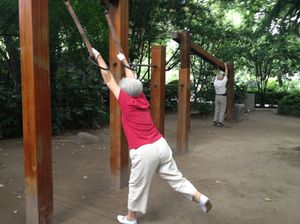 There is more, at InterContinental Shanghai Ruijin Hotel, such as the original office of Chiang Kai-Shek, and the room where he got married, and so much more.  Some areas, like the separate 80-bedroom Club House, are already open (love the covered purple waste-bins, a Chinese partiality).  Love seeing people perambulate in the grounds.  In another Shanghai greenery-area, Jing’An Park, by the way, I admired not only the tai-chi and fan-dancing, but people of all ages walking, backwards as well as forwards.  Here, a mature lady makes use of the paracourse. 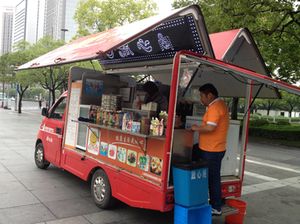 Keeping hunger at bay, on a Pudong street

And everywhere in town, of course, there are food sellers.  You will never go hungry in Shanghai – though the foodstalls are not as ramshackle as in, say, Bangkok, where they flow over the pavements so that you often have to walk in the road to avoid not only carts and people but also the smell.  Here in Shanghai it is all meticulously clean.  You have a feeling that health inspectors are constantly checking the entire city, perhaps by CCTV.  This is a mobile food service station one block from the Four Seasons. 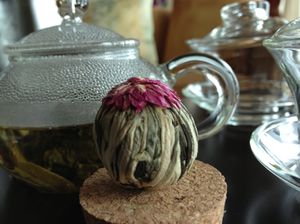 Tea presentation, with a furled tea-ball at the ready

Perhaps that old lady is fortified by tea, more than ever a necessity of life.  Yes, there are Starbucks but every luxury hotel, it seems, offers a special tea.  This is a jasmine pearl tea ball, with another already opened up, in the water, photographed in room 3362 of Shangri-La Pudong West Shanghai.