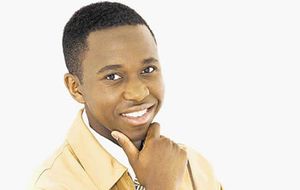 The world of luxury hotels throughout sub-Saharan Africa and the Indian Ocean was in Cape Town this week for the inaugural International Luxury Travel Market ILTM Africa, and it was brilliant. Seventy hotels, resorts, safari companies, cruise ships and others showed what is new, meeting one to one with 70 of the world’s best luxury travel agents, who had come from A to Z, Argentina to Zimbabwe by way of Australia, China and, in big numbers, the USA. The gal learned so much – including the fact that somehow, somewhere, she wants to meet this young man, Siyabulela (Siya) Xusa. He is still only 20, just finishing at Harvard, NASA has called the minor Planet 23182 after him (Siyaxusa), he is learning Mandarin and he is on close terms with the Obamas. All this, starting with doing chemistry experiments in his mother’s kitchen here in South Africa. 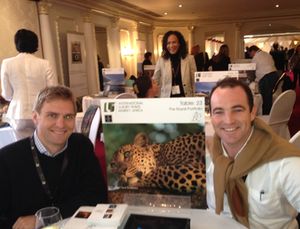 Siya’s story was one of the many fascinating elements shared by Clem Sunter, one of the speakers at the Forum that always precedes the main business (for which read ‘speed dating’ between the hotels and others, and the agents) of ILTM.  Clem Sunter wrote Mind Of A Fox, published a few months before 911, in which he tragically predicted that someone was going to attack the USA.  He is not only a pundit on world economy and business but he is incredibly funny.  Sun City? Macau with lions.  Ageing demographics? Put a roof over any English village and you have an old people’s home. And Africa, Clem?  Before thinking of doing business in any of the 47 countries of Sub-Sahara, look at its leader.  He obviously likes Ghana’s John Dramani Mahama, and South Africa’s possible leader-in-waiting Cyril Ramaphosa. 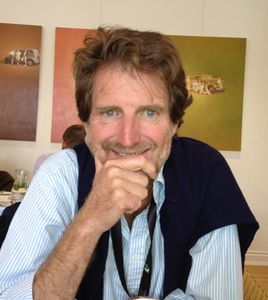 It was lovely to see who was exhibiting and catch up with old friends, people like Simon Mandy from The Royal Portfolio.  He says he recently had a full house of Chinese at the Portfolio’s divine 11-room La Residence & Villas in the Vineyard in Franschhoek, where, as throughout the Portfolio, most of the interior design is by owner Liz Biden. Sir Elton John comes every year, and aficionados of this beauty, in 30 acres surrounded by vineyards, include Adrian Brody and Ivanka Trump, and for a Chinese buy-out a Mandarin translator miraculously appeared. After the Forum I had lunch with my long-time friend Colin Bell, who is shortly to publish, with co-author David Bristol, Africa’s Finest: the most sustainable and responsible safari destinations in sub-Saharan Africa and the Indian Ocean Islands.  Colin Bell co-founded Wilderness Safaris but moved on as a result of one of those eureka moments while canoeing on the Zambezi and then he went on to found Great Plains Conservation, to create role-model conservation projects throughout Africa, the Indian Ocean (and possibly India). 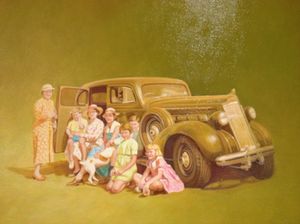 .. in front of one of the Mount Nelson’s intriguing paintings

We were lunching in Oasis, at the Mount Nelson, where ILTM was held. One of the paintings on the Oasis walls, of an old car and a family in the 1950s, reminded me of my last visit to lovely Cape Town, for the annual meeting of The Leading Hotels of the World last November.  For the final gala, we were all driven to the vineyards in amazing historic cars driven by their proud owners.  Something unusual like that makes one red carpet event stand out from another. (This year’s Leading event will be in New York: wonder what Bloomberg and Buddies will arrange for everyone?) 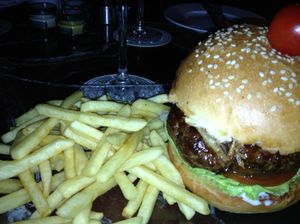 Escape to an ostrich burger (with fries, of course)

Did I escape during ILTM?  Of course.  The only way to survive any total-immersion industry event, any industry, is to have a breather now and again. At Twankey’s, for instance, I was introduced to the ostrich burger, which obviously is very good for a growing girl. 100 grams of ostrich gives you 142 calories compared with 209 for broiled tenderloin and 256 for pork chop, and its percentage of fat is 1.12 compared with beef’s 17.76.   Obviously I had to start with half a dozen Big Bay oysters, and the burger came with a bun (left to one side) and fabulous fries, and I added a mixed salad with no dressing.  Love Twankeys, on the corner of Taj Cape Town right opposite all the parliament and government buildings and managed by an extremely suave Alsatian, Jean Muller. 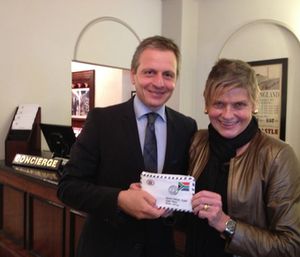 It was another suave guy, this time Parisian, who actually made sure I left Cape Town.  As I left Mount Nelson, the luxury hotel of which he is boss, he came running up with my boarding card – in a zipped pouch embroidered to look like an airmail envelope, complete with the hotel’s address.  As if I could ever forget it, or ILTM.