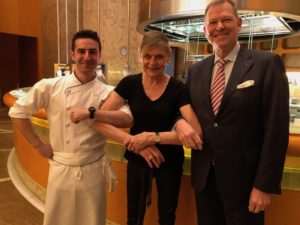 The gal’s time at Grand Kempinski Shanghai turned out to be one long feast, but then the 682-room hotel needs to feed a lot of people, and there are none of the plethora of outside restaurants that you find within a few minutes’ walk of so many luxury hotels.  Here, people not surprisingly find it easier to eat-in, especially as the choice is not only wide, but good.  Dinner was hosted by hotel GM Rudiger Hollweg at the Italian restaurant, Acqua, whose Milanese chef, Marco Erba, is just so enthusiastic that you cannot fail to fall for this menu. 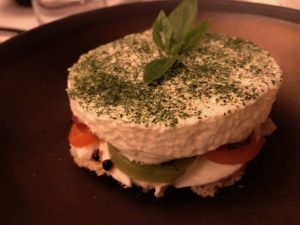 Take the caprese, for instance.  There are tomato-and-mozzarella salads all over the world but this is unique.  It looks more like a white hamburger, topped, as the photo shows, by a mozzarella mousse. I do like the way this hotel has restaurants that are so definitely themed. After dining at Acqua, the following day’s lunch was at Alero, which was magnificently Spanish.  Of course it had to be tapas, at that meal – carpaccio prawns with herb and spice olive oil, hamachi ceviche with litchi and green apple, and divine marinated tuna in seaweed cone with avocado and wasabi cream.  Honestly, I quickly realised that this 30-floor place is a combination of great restaurants that happens to have rooms. 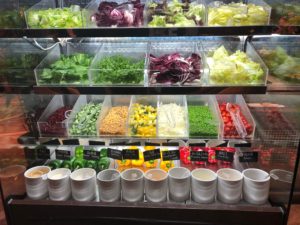 And the market likes it – October 2018 closed at 92% occupancy, up from 84% a year ago. People stay an average 1.9 nights, but perhaps as they appreciate the food offerings they will stay longer next time, especially if they have rooms with views across the Huangpu River to The Bund (see a video of my room, below).  I admit I had never come across this lovely, friendly place before.  It opened in 2010 as a result of a meeting, back in 1995, between Fidel Castro, on a state visit to China, and the Chinese Government.  It was agreed to build and own two hotels, jointly, one in Havana, which never got going, and one here, which did, eventually – today, Grand Kempinski Shanghai is 51% owned by Cuba, and 49% by China. 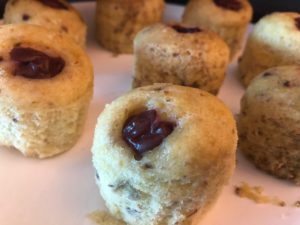 The hotel opened as Melia but Kempinski won the bid to reflag it in 2013, since when it has gone from trength to strength. The team here is always adding something new. Here is one example: the all-day restaurant is so busy that, at chef Bruno Bruesch’s suggestion, a vertical salad bar was made, and installed.  It takes up less space, and is easier for servers, and diners. At the same time there are hints of Germany, in honour both Kempinski’s roots, and the current GM – see the German cherry sponges on the breakfast buffet. And, with German efficiency, they make Chinese events work like lightning. The photo at the top shows breakdown of one of the three weddings taking place, simultaneously, during my visit. Out of sight in the photo but nevertheless in close proximity to the breakdown team, guests at the wedding were still happily eating, and, more obviously, drinking the evening away.  ONLY in a luxury hotel in China… AND NOW SEE SUITE 2605