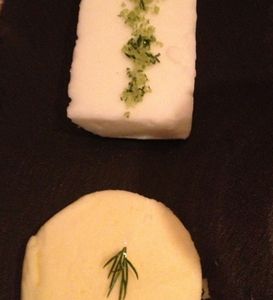 Butter, cow and, behind, goat

Just occasionally a new taste is introduced to stop a palate becoming jaded, and the gal has to thank The Lobby restaurant in The Peninsula Chicago for the pairing of multigrain toast with goat butter.  Actually an archive article in the New York Times says that ‘goat butter’s real nuance comes when eaten with bread sprinkled with sea salt and drunk with honey-sweet Pineau de Charentes’ but you could hardly expect even a luxury hotel to offer that Cognac-area beverage at breakfast time.   It was, anyway, heaven, particularly since it was preceded by one of the best-ever Greek yoghurts, and the coffee was pretty memorable too. 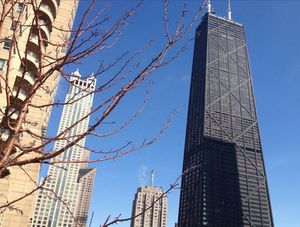 Look out, at the John Hancock Center

The Lobby is one of those adaptable spaces, just off the hotel’s fourth floor reception area, two floors that you can do anything with.  During the afternoon live classical music wafts down from a gallery at one end. As the hours wear on this turns into modern versions of old music, not exactly swing but tunes you can recognize, but sometimes you are not sure why.  By 9.30pm there are lines at the entrance, waiting to get in for the chocolate buffet, a delicate spread that would win any Coupe du Monde or similar pastry competition, anywhere.  There must be at least 40 different types of goodies, from whole near-black chocolate cakes through to one-bite white chocolate macaroons. In contrary style, the nearer to size-zero the dessert buffet taker, the bigger the plateful taken. 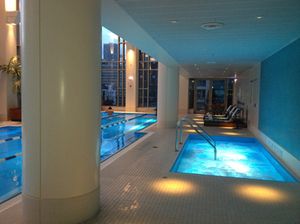 No wonder Chicago is such a draw. Now that Detroit is out of the question and spring is supposedly coming, Rahm Emanuel’s territory is THE magnet.  I am told that people will drive up to 700 miles for a weekend, or even an overnight, here.  You see the people carriers pull up, weary families with kids and oodles of baggage pour out. The car spends the night in a hotel’s garage for $54, nothing when you think what the driver will be spending in Crate & Barrel, Nordstrom, Victoria’s Secret, Zara and the other irresistible stores along Miracle Mile, also known as Michigan Avenue.  The 379-room Peninsula is stylishly just off, on East Superior. From any north-east corner suite (not necessarily 1808 but that will do fine as it has its own outdoor hot tub) you can look across to the John Hancock Center – does big-O (Oprah rather than Obama, who I know does not) still live there? 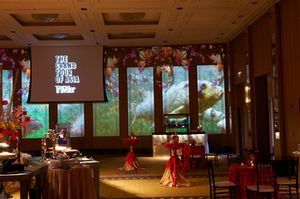 After the chocolate buffet last night, I head at dawn to the pool, all 80 feet of it, with a hot hot tub to one side. In summer there is a small sunning terrace outside. Year-round, the gym, another of these Serious Affairs, is busy with keen fitness addicts who know what they are doing – none of the sitting around and gossiping that you see far too often. And by seven, at least at weekends, the first clients are arriving for their Espa treatments.  Yes, the seven rooms are booked, dawn to way past dusk.  Sunny, doing me, is telling me about pregnant women’s faces: some find their skin, and acne, actually improves as the confinement progresses. 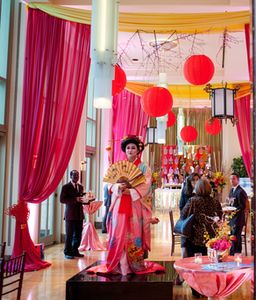 There is lots to do here.  I study the allegorical painting behind the conciergerie, which was done specially for the hotel’s 2001 opening by Gérard Coltat and his son Clement, from Castagniers, near Nice (they have also painted for David Bouley’s Evolution at Ritz-Carlton South Beach, and for David Bouley restaurants in New York).  I consider taking the three-hour offer of a Peninsula-Green Mini Cooper S, with GPS and WiFi and a roof-rack to carry all my shopping. I head down to ground level, to the totally brilliant Pierrot Gourmet, a booked-out brasserie that few possibly think is ‘hotel’ though you can charge to your room.  I thought all the servers were French, but in fact the chef-clad guy who brought my truffle mac’n cheese, which was a dream, was a Turk brought up in Novosibirsk. Spasiba. 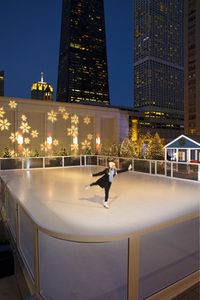 Coming up next winter, I am assured, this luxury hotel will extend its seasonal outdoor skating rink, with all profits going to local charities.  Yes, there is always something to do. The concierges can arrange local get-to-know Chicago scavenger hunts, popular with teenagers. Peninsula Academy classes include privileged visits to The Merchandise Mart with a local designer.  Last week Condé Nast Traveler launched its all-Asia April 2013 edition here.  That flexible Lobby became one giant Asian entertainment centre, with acrobats, and somehow it got intermingled with a red-carpet fashion show being held by local designer Elda de la Rosa – how did her models, and front-row clients interact with Chinese trapeze artists, one wonders? And the food was yummy, as chef Lee Wolen served dishes from his usual, unusual, The Lobby dinner menu – he had already placed each course, one by one, day by day on Facebook.   The actual dinner started, coincidentally, with what I chose at my non-party dinner, roasted beet salad with ricotta, spelt and pistachios – in my case, thanks to the sommelière, with Enrique Foster Malbec 2012, from Mendoza.