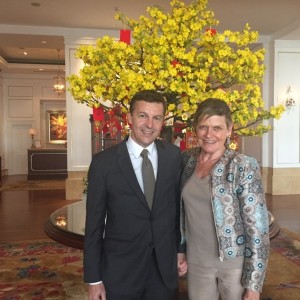 Frédéric Boilin, in front of a New Year mai tree

Hyatt‘s food reputation is justly renowned worldwide. It has been for years, and intermittently its head culinary guru, Andreas Stalder, comes up with something new. Singapore’s Grand Hyatt has the much-copied and seemingly eternal Mezza9 multi-station concept. Beijing’s Grand Hyatt has Made In China, multi food stations and glass-walled kitchens, and museum-quality artisan displays. Chennai’s Park Hyatt has Flying Elephant, an oval space where you walk up, inside its periphery, diagonally past seven dining areas. In Ho Chi Minh City, Park Hyatt Saigon closed for a full three months in 2014 to update its entirety, including restaurants. 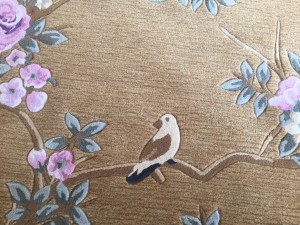 Newly-arrived French GM Frédéric Boulin had loved Vietnam on many vacation visits and he is thrilled to be living here, now. He proudly shows off how Super Potato‘s restaurant upgrades include the interactive all-day Restaurant Opera, with brick walls inside, and tables outside in a glass-walled conservatory, or open-air under shade-giving umbrellas (you look across at the Opera House, hence its name). There is also a pan-Asian restaurant, another Super Potato masterpiece, and, applauded by many TripAdvisor reviewers, the relaxing Lobby Lounge, a two-floor high white space with ceiling-high white lattice shutters – see video below. You look up, to some fascinating local art, and down, to carpets that unusually include slightly-raised birds. 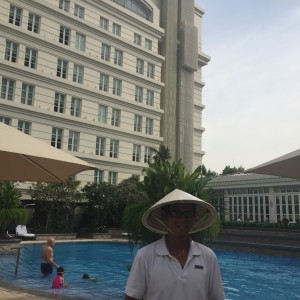 The pool, with new Pool House to right

The 390-room hotel might be city centre, and just five minutes’ walk from busy Dong Khoi shopping street, but it provides an oasis after a day of meetings, or sightseeing. The pool is reached via gardens with several semi-private sitting areas, and it has a total of six cabanas: across the other side of the pool, now, is a Pool House, perfect for private parties or small weddings. Also new since the 2014 upgrades is an increased sense of being ‘at home’ in your bedroom. Designer Vincent Koh has deliberately put in an eclectic collection of furniture – I loved having simple white shutters instead of curtains, and some wall-hung photos were in plain gold frames, some in silver. Some furniture is deliberately high off the floor to give an extra sense of space. 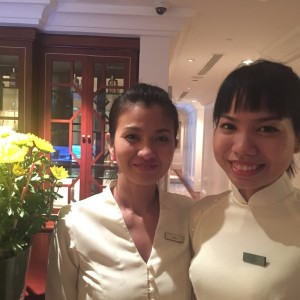 There are so many stylish points about this luxury hotel. Rooms come with proper wood-ended shoe-trees, and tissues and other bathroom amenities are in exquisite painted-lacquer boxes. Toiletries are local, Cochine Saigon, also used in the spa, which is another happy memory – try a mangrove facial, which restores natural balance, or at least a sense of calm after a busy day sightseeing. More style: want fine wines? The other day the hotel hosted dinner for ten, a tasting of 1982 first growths: Ch Haut-Brion, Ch Margaux, Ch Mouton Rothschild, Ch Lafite Rothschild and Ch Latour – wow! One final tip. Leave in style, and book the hotel’s Maybach, WiFi-enabled of course (it is the only one in town, by the way).